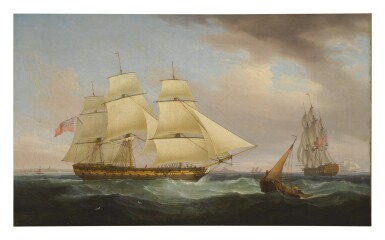 THOMAS WHITCOMBE | A SHIP FROM THE EAST INDIA COMPANY, SAID TO BE 'CASTLE EDEN', 818 TONS, ON HER FIRST VOYAGE

THOMAS WHITCOMBE | A SHIP FROM THE EAST INDIA COMPANY, SAID TO BE 'CASTLE EDEN', 818 TONS, ON HER FIRST VOYAGE

A SHIP FROM THE EAST INDIA COMPANY, SAID TO BE 'CASTLE EDEN', 818 TONS, ON HER FIRST VOYAGE

signed and dated center right on the boat: T. Whitcombe 1812

Canvas is lined. The image and its details read well. Craquelure is mostly visible in the sky and sails, though it is stable. Inspection under UV shows a few spots of scattered retouching to the sky that have been well applied, while a other spots of retouches scattered in the sails fluoresce and have slightly discolored. Painting can hang as is. Offered framed.

Acquired by the current owner in London, circa 1980.

Marine art gained great importance in London especially in the 18th and 19th centuries as it provided records of the merchant shipping and naval achievements of the time. This painting, said to commemorate the maiden voyage of the Castle Eden to India, is one of many maritime works that portrays ships from the East India Company (EIC). After India granted the Company exclusive trading rights in 1711 for the import of lucrative supplies like silk and cotton [1] commissions increased for paintings depicting these ships. Here, Thomas Whitcombe not only celebrates the valiant journeys to the east, but also showcases his talent as an artist who accurately rendered the ships and their response to the conditions of the sea. The spectator gets a sense of the harsh weather that awaits the boats with the ominous gray clouds that loom in the upper right corner and the strong winds that exaggeratedly propel the ships forward against the choppy waves cut in half by the bows. Although little is known of Whitcombe’s life, the precise details with which he painted ships suggest that he had experience at sea. Since Whitcombe exhibited 56 paintings between 1783 and 1824 at the Royal Academy, it is likely that he spent most of his career in London where his works were sought after and fetched high prices [2]. His importance as a maritime artist remains, and some of his works are in museum collections like the Tate Britain, London and The National Maritime Museum, London.