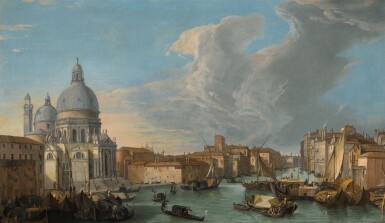 LUCA CARLEVARIJS | Venice, a view of the Grand Canal with the Church of Santa Maria della Salute | 盧卡・卡萊瓦里斯 |《威尼斯，大運河與安康聖母聖殿景觀》

LUCA CARLEVARIJS | Venice, a view of the Grand Canal with the Church of Santa Maria della Salute | 盧卡・卡萊瓦里斯 |《威尼斯，大運河與安康聖母聖殿景觀》

Venice, a view of the Grand Canal with the Church of Santa Maria della Salute

Oil on canvas , in a gilt wood frame in good condition.

The original canvas has been lined and the lining is in good condition.

The paint layer is stable and secure and in a well preserved state.

Under u-v light strengthening to the edges can be detected along with reduction of the stretcher bar mark. Some minor scattered loss can also be seen in the sky, in particular, where strengthening of paint has been carried out.

The foreground paint is very well preserved and the fine details and subtle tones within the architecture are intact , some of the more vulnerable scumbles and shadows have been very slightly compromised.

The textured paint to the highlights, especially, is in good condition.

No appreciable tonal advantage would be gained from removing the varnish

From whom acquired by a private collector;

There acquired by the father of the present owner;

Recognised today as the first of the great Venetian view painters and of pivotal importance for the genre’s development in the eighteenth century, Luca Carlevarijs painted this view of Venice in the mid-1720s, when he was broadening his repertoire from his commemorative paintings of diplomatic scenes and large pageant paintings and devising innovative compositions for his city views. Published by Dario Succi in his recent monograph on the artist, this work depicts one of the city’s most important landmarks beyond the confines of Piazza San Marco, the magnificent and instantly recognisable church of Santa Maria della Salute on the Grand Canal.

A unique composition, the painting’s importance lies in the originality of the view and in the artist’s ability to portray one of the city’s most emblematic buildings within an expansive setting. Preserved at the Museo Correr, Venice, is a preparatory drawing in pen ink and wash for one of the boats laden with wood cargo with a smaller vessel alongside (centre right).1 We are grateful to Dottor Dario Succi for pointing out that the group of three rancone (freight transport vessels) on the left of the painting correspond to another drawing at the Correr,2 and that the same group also features in a large painting by Carlevarijs at the Gemäldegalerie Alte Meister, Staatliche Kunstsammlungen Dresden, which depicts the arrival at the Ducal Palace of the ambassador Count of Colloredo on 4 April 1726.3 The recurrence of the same motif suggests a similar dating for the present work. By capturing the scene’s bustling atmosphere and luminous effects Carlevarijs’ achievements here anticipate those of Canaletto (1697–1768).