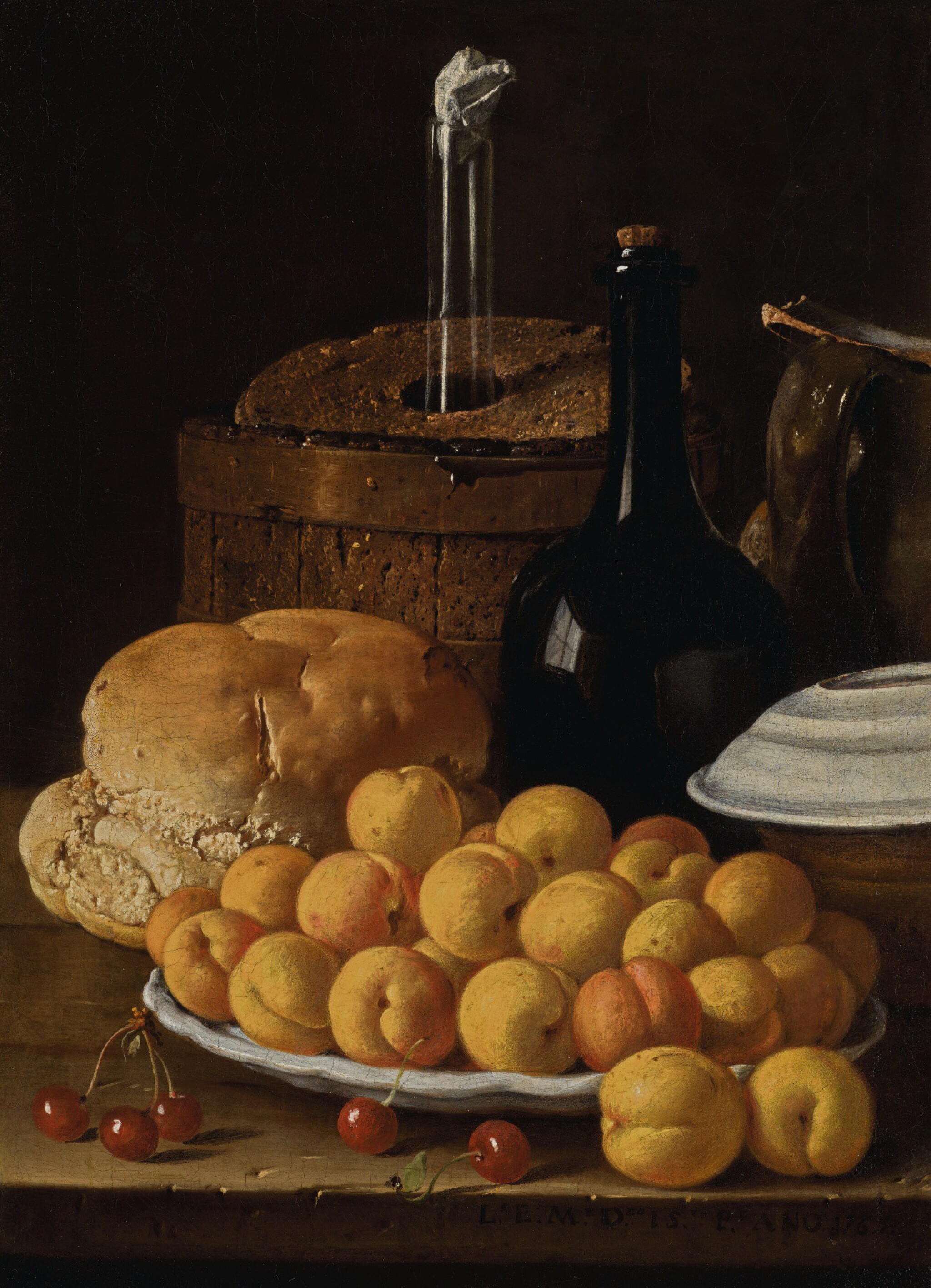 Still life with a plate of apricots, cherries, bread, a wine cooler and receptacles

The following condition report is provided by David Chesterman who is an external specialist and not an employee of Sotheby's:

The canvas has been lined and stretched onto a replacement wedging stretcher. The painting has been enlarged by around 1 – 1.5 cm. at the sides, which is largely hidden by the rebate of the frame. The lining is of good quality and the surface has not been compromised.

The painting is in good condition. There is a small number of scattered restored little losses that are visible under UV light. The retouching is mostly repairing glazes, principally to the apricots in the lower right corner and to the overturned plate and there is an area of retouching (aprox 1 by 1 cm.) lower centre. Meléndez used glazes extensively.

A beautiful example of this artist's work, in a very acceptable state of preservation.

This arresting painting is a signed and dated work by Luis Meléndez, the greatest still-life painter of eighteenth-century Spain and one of Europe’s leading specialists in the genre. Painted in 1765, Still life with a plate of apricots exemplifies the artist’s talent for rendering everyday objects with an acute sense of their individual qualities. His mastery of colour and light is here skilfully deployed to bring out the different elements within the composition. This painting was created not long before Meléndez executed his outstanding set of forty-four still lifes for the Prince of Asturias (1748–1819) – the future Charles IV – for his New Cabinet of Natural History. This celebrated series, now divided between the Museo Nacional del Prado, the Patrimonio Nacional and the Museo Nacional de Escultura, comprises approximately one third of Meléndez’s known still lifes.

The artist signed this painting with the initials of his full name: Luis Egidio Meléndez de Ribera Durazo y Santo Padre. From a family of painters from Oviedo in Asturias, he received his initial training from his father, Francisco Antonio Meléndez (1682–1758), who after spending nearly two decades in Italy (Luis' birthplace), in 1717 returned to Madrid, where he was appointed royal portrait miniaturist. Luis later entered the workshop of Louis Michel van Loo (1707–1771), court painter to Philip V. He was one of the first students to join the newly established Academy, founded in 1744, that would later become the Academia de Bellas Artes de San Fernando. Meléndez rapidly excelled in drawing. His prodigious talent is proudly displayed in his remarkably assured self-portrait of 1746, today at the Musée du Louvre, Paris. However, he was expelled from the Academy as a result of a dispute between his father and its Director. With his prospects severely undermined, Meléndez left for Italy to complete his artistic training, returning to Madrid in 1753 to assist in a royal commission to illuminate a set of choir books. In the absence of further work at court, he turned to still-life painting. His earliest still lifes date from 1759 and 1760, although he would have to wait over a decade before his royal patrons sought his work in this genre.

The vertical format of Still life with a plate of apricots, with its combination of ordinary fruits and receptacles placed in a dense arrangement, is characteristic of Meléndez’s work of the 1760s. It incorporates a number of elements that feature in other paintings by him at this date, notably the loaf of bread, which recurs in three works painted in a similar vertical format, all now at the Prado, for example, Still life with herrings, c. 1760–70 (fig. 1).1 The tactile quality of the bread's crusty surface is rendered with the utmost realism. Also striking in this painting is the combination of bottle and wine cooler to create strong vertical accents. The long neck of a clear glass bottle emerges from the perforated lid of a cork cooler, a compositional device found only in one other still life on a vertical canvas, a painting now at the National Gallery of Art, Washington.2 The only other example (now destroyed) of Meléndez combining cork container and bottle is a still life formerly in the collection of the Museum Ridder Smidt van Gelder Museum, Antwerp, a work left undated by the artist.3 The wine cooler depicted here – its pitted surface described in considerable detail – is given an equally prominent position in another still life at the Prado, Still life with a box of jelly, bread, wine cooler, silver salver and glass, dated 1770 and signed in a similar way to this painting.4 The same roughly textured object features also in an unsigned and undated work in a private collection, Still life with a plate of azaroles.5 Its cork surface clearly appealed to the artist, particularly when placed in combination with the glassy translucency of a bottle, the lustre of earthenware and the very different textures of bread, soft-skinned fruit and the glossiness of cherries. At the far right, a glazed pottery vessel probably made at Alcorcón is covered with a broken piece of crockery, and faithfully reflects contemporary usage, since it was customary to cover containers with such fragments to protect their contents. The dish is a familiar prop in several of Meléndez’s still lifes, its undulating rim adding visual interest to the composition. In his arrangements of objects, a cork stopper is often placed to seal the glass bottles in the cooler but in this painting he has introduced a more unusual element: a piece of crumpled paper that serves the same purpose.

Almost a decade after completing this painting, in a still life of 1773, Meléndez was inspired to revisit the motif of a plate of apricots and cherries painted here for the first time. The later still life of apricots and cherries, now at the Prado, is markedly different in character to the compact arrangement seen here and typifies the larger horizontal canvases of the 1770s.6 By contrast, Still life with a plate of apricots, with its characteristic combination of different surfaces and the more solid presence of its objects, evokes the work of the seventeenth-century pioneers in the genre, Juan Sánchez Cotán (1560–1627) and Francisco de Zurbarán (1598–1664).