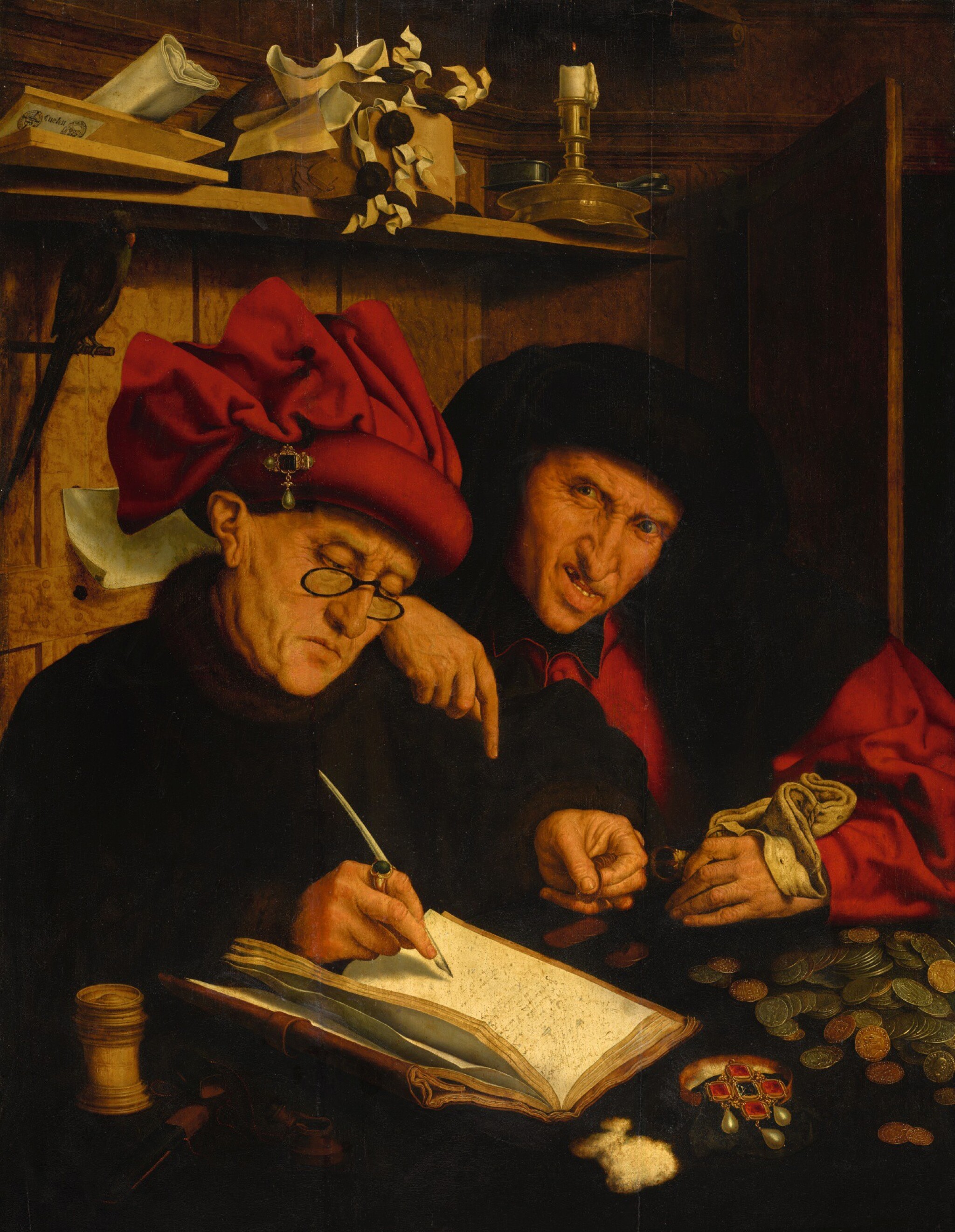 The Tax Collectors or 'The Misers'

"The following condition report has been provided by Sarah Walden, an independent restorer who is not an employee of Sotheby's.

This painting is on an oak panel with two joints backed by two old vertical supporting bars. The top and base edges have been thinned for about three inches in the past. Both joints have been reglued and retouched, and there is a small butterfly wedge inserted, in the face of the painting, at the top of the right joint. This has been retouched and there is a wider band of retouching across the left joint where it crosses the paper at the top, and through the face, with a narrower line elsewhere down each joint. The restoration is old and unnecessarily broad, and the varnish is fairly yellowed. There are two quite short old cracks from the top edge near the left joint, one other small crack near the left base corner, and minor vertical brittle craquelure along the top edge. However the panel appears otherwise to have become stable over time.

Little has been done for a century or so and the surface is fairly messy. The lighter background towards the left and some of the flesh painting is a little thin, with minute flecks of past lost paint. These tend to be scattered over the left background and on or around the face and hands of the figure on the left, while the right figure is more strongly intact. The darker shadows on the right are well preserved and the red drapery is also magnificently intact in both the hat on the left and the drapery on the right, as is the beautiful still life on the table and on the shelf above. The blacks and all the darker drapery also appear to be unworn and intact, although dimmed by old varnish.

This report was not done under laboratory conditions."

The Dutch text depicted in the book reads as follows: "Dits den ontfanck... Item die...alle is waerdich... die seven ma.nden... Item die ...is waerd... Somma t'samen" This has been roughly translated into English: "These then received... Ditto...all is worth... That seven months... Ditto...is worth... Sum all together"

Most probably acquired by the grandfather of the present owner circa 1880;

This composition clearly enjoyed widespread and enduring popularity in the mid-sixteenth century and beyond, for some sixty versions of it are known today, of varying degrees of quality. All may have been influenced by a lost picture by Jan van Eyck, and all bear some relationship to the famous painting of The Banker and his wife painted by Quinten Massys in 1514 and today in the Louvre (fig. 1). Their principal debt, however, is to the Tax gatherers by Marinus van Reymerswaele, the original of which is also in the Louvre, and according to Lorne Campbell this is probably the source from which they all ultimately derive.1 More recently, however, Larry Silver has argued that another version today in the Liechtenstein Princely Collections in Vienna can be attributed to Quinten Massys himself and considered the protoype for this design.2 Certainly all Reymerswaele's signed works, with dates ranging from 1521 to 1547, betray a strong influence from Massys. Many still-life elements in them, such as his own Banker and his wife (1538, Madrid, Escorial) recur in the versions of The Tax Collectors. Little is known of his life however. He may be the 'Marinus de Seeu Schilder van Romerswalen' (Marinus the Zeelander, painter, of Reymerswaele) recorded by Karel van Mander, but if he ever settled in Antwerp he is not recorded as a Master there.2

This painting is a good example of the evolution of the many variants of the original design, and is probably among the later versions of it. In common with most of these, the two figures now sit alongside each other, wearing archaic but much simpler headgear, and are surrounded by a different set of ephemera, including a sand box, jewels and a moneybag. The present painting belongs to a particular group of variants, generally of slightly larger size, in which a parrot replaces the pair of scissors hanging on the wall behind the two men. The best examples of this particular group are those in the Royal Collection at Windsor Castle, and in the Pushkin Museum in Moscow.3 The present picture differs from these only in the omission of the money bag lower right, the shape of the sandbox and in the disposition of the quill case lower left. The curious ball of wool in the foreground is also omitted from the Moscow version and the placing of the seals on the wall and shelf behind is slightly different in each. Campbell lists other related versions in Berlin, Detroit, and formerly in the Hart collection, Pittsburgh and Mallow Castle, County Cork.4

One further aspect of the relationship between this panel and those in Windsor and Moscow also serves as a possible illustration of the original meaning of all these panels. This is the book or ledger in which one of the 'Misers' or tax collectors is writing. In most versions of the composition this is the drawing up of an account of municipal revenues (on beer, wine etc.) from imposts let out to farm. As far as can be read, the inscription in this panel and that in Moscow also follow this, with the inscription being in Dutch. In the Windsor version, however, the list in the ledger is replaced by record of a payment made in various currencies. This enables us to date the Windsor version to in or after 1548 and before 1551, when the exchange rates noted in the ledger came into force.5 This would indicate that versions of the design continued to be produced for at least ten to fifteen year after Marinus' presumed death around 1545–46. Such changes in the texts might suggest that they were intended to be interpreted in different ways, but in this case, as in the majority of versions, the picture was clearly intended as an attack on the greed or avarice of money changers and tax gatherers. As such men were paid percentages of the revenues they collected (and thus had every incentive to extract every last penny from their charges) it is not difficult to understand why this composition became so popular so quickly. In some versions, such as that in the Museo Stibbert in Florence, the moral message is made even more explicit, and an admonitory text based on Luke 12: 15–21 specifically rails against the mortal sin of avarice.

1 For the most complete recent discussion of the Louvre painting and the evolution of this design see P. Ackroyd, R. Billinge, J. Kirby and L. Campbell, 'The two Tax Gatherers by Marinus van Reymerswaele: Original and Replica', in National Gallery Technical Bulletin, vol. 24, 2003, pp. 50–64; see also L. Campbell, The Early Flemish Pictures in the Collection of Her Majesty the Queen, Cambridge 1985, pp. 114–18, under no. 72 and more recently L. Campbell, National Gallery Catalogues: Sixteenth Century Netherlandish Paintings with French Paintings before 1600, London 2014, pp. 648-660, under NG 944.