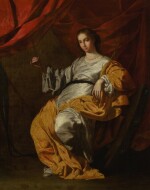 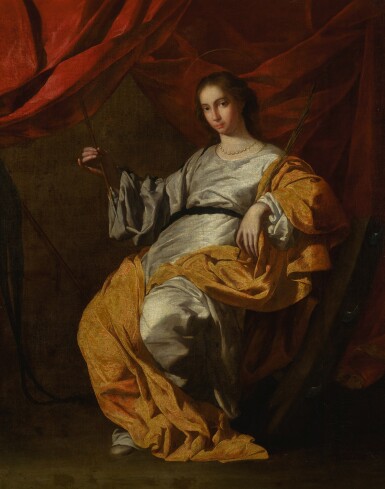 The canvas has an old and sensitive lining. The varnish appears thick and shiny with a dirty, discolored surface including some accretions – including the white spot in the back ground to the left of her head, visible in the catalogue image. There are no major damages visible to the naked eye. There are some old losses with associated repaint at the upper and lower margins. A canvas seam (visible only in raking light) runs the length of the canvas, 5 inches from the right edge. Inspection under ultra violet light reveals a patchy varnish that appears to have been partially cleaned over much of the figure – where it remains it fluoresces opaque making analysis of any early restoration difficult. What is visible are localized patches of retouching in the folds of the fabric of the Saint’s robes and curtain backdrop, none of particular significance. There is a campaign of small retouchings in the flesh tones of her face and left hand. Much of these retoucings appear to serve the purpose of masking the distinctive craquelure, a pattern of tiny squares that reflect the weave of the Neapolitan canvas. Other areas such as her right sleeve and upheld right hand are seemingly untouched and remain under the thick old varnish. In overall fair condition and offered in a carved wood and gesso gilt frame in good condition.

By family tradition, said to have been acquired by the present owner’s grandfather from Felix Boix Merino (1858–1932);

It is only quite recently, in the 1980s, that Antonio de Bellis has come to be recognized as one of the leading personalities of Seicento painting in Naples and details of his life and career are still very scarce. His earliest biographer, Bernardo De’ Dominici, writing in the eighteenth century, praised his works highly: ‘...ad ogni modo si vede in essi l’ottimo componimento, con che sono ideate, il buon disegno, e l’intendimento di chiaroscuro, con belli accidenti di lumi’ (‘...in every instance we see in them the excellent composition with which they are conceived, as well as good design and understanding of chiaroscuro, with beautiful accents of light’).1 This elegant portrayal of the fourth-century martyr Saint Catherine of Alexandria is a mature work by de Bellis, datable to the years around 1645–50, when he increasingly abandoned the vigorous naturalism of his earlier years for a more refined and formalized elegance. It was during this period that the early influence of Ribera and Massimo Stanzione - whose pupil De' Dominici tell us he was - was to be augmented by that of Bernardo Cavallino, resulting in some of de Bellis’ finest work.

It was after 1640 that de Bellis’ work first began to be more closely associated with that of Cavallino, and indeed the two painters’ work has often been confused since. The elegantly attenuated and exquisitely finished figure of Saint Catherine in this painting is particularly reminiscent of Cavallino’s work in the mid-1640s, such as the famous Saint Cecilia in ecstasy of 1645, now in the Palazzo Vecchio in Florence,2 or the Saint Catherine of the same date in a private collection.3 As Pérez Sánchez first observed, the sinuous almost serpentine line of the saint’s body strongly recalls the signed Saint Catherine of Alexandria by Francesco Fracanzano (1612–1656), another of de Bellis’ contemporaries in Naples, which is to be found today in the Instituto Nazionale di Previdenza Sociale in Rome.4 The two paintings are very similar in conception and it seems quite conceivable that de Bellis may have seen the Saint Catherine in the original. Although on quite different scales – the Fracanzano measures over two metres in height – both paintings share the same golden tones in their draperies, and reveal their authors moving away from the naturalism of Ribera towards a more refined elegance inspired by Stanzione, even if Fracanzano’s work lacks the additional elegance of line de Bellis drew from Cavallino. De Bellis continued this trend in other works from this period such as his Saint Sebastian tended by Saint Irene, which is thought to date to just before 1645,5 or the equally Cavallinesque Christ and the Woman of Samaria from the same decade in a private collection.6 The tapering fingers and the slightly theatrical gestures found in the latter as well as in the present canvas, seem to be characteristic of de Bellis’ work at this date. Spinosa’s later identification of the saint here as Saint Ursula seems unlikely given the presence just behind her chair, albeit in the shadows, of her normal attribute of the spiked wheel upon which she was tortured.