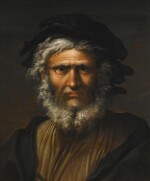 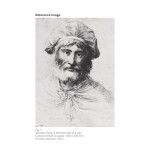 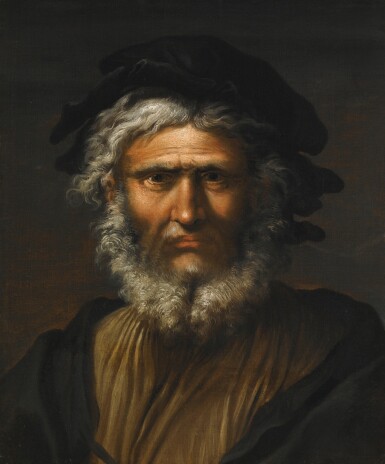 Portrait of a bearded man, bust-length, traditionally identified as Masaniello

Portrait of a bearded man

Oil on canvas, in an ornate carved gilt frame in good condition.

The original open weave canvas is lined and strained on to a 19thC stretcher with an inscription.

The paint layer is stable and secure.

A horizontal fracture to the canvas, 25cm by 1cm, can be seen below the sitter's beard; this fracture has associated repaired paint loss which has not been sensitively applied and has discoloured.

Under u-v light a scattering of restorations can be seen to the edge of the canvas, through the hat and to the background; some of these have been applied to mitigate the presence of the pale ground layer that shows through the more thinly applied passages of paint.

The paint through the flesh tones, hair and hat are well preserve and the paint texture, here, is in good original condition.

The varnish is degraded and discoloured and does not saturate satisfactorily, masking the bravura brushstokes, particularly to the fabric, and the still bold colours; its removal would improve the tonality and reveal nuances of the composition.

By descent at Grosvenor Street and then Corsham House until sold by the first Lord Methuen (1779–1849) on 23 March 1845, to pay for restoration work to the house, to the dealer George Yates for £40;

Acquired from the above by Joseph Hardman Esq., 30 Upper Philimore Place, London;

Acquired by the present owner, circa 1970.

T. Martyn, The English Connoisseur, London 1766, vol. II, p. 19 (both this and the above as in Grosvenor Street, in the First Parlour, Between the Windows);

J.P. Neale and T. Moule, Views of The Seats of Noblemen and Gentlemen in England, Wales, Scotland and Ireland, London 1825, vol. II (as in the State Dressing Room);

J. P. Neale and Jones & Co, Jones' Views of The Seats of Noblemen and Gentlemen in England, Wales, Scotland and Ireland, London 1829, p. H2 (as at Corsham House, hanging in the State Dressing Room);

Both in his landscapes and head studies, but particularly in the latter, Salvator Rosa was one of the more dynamic painters of the Baroque in southern Italy. This compelling portrait of an unknown man was long thought to represent the Neapolitan fisherman and revolutionary Tommaso Aniello (known as Masaniello) and more recently was briefly thought to depict Rosa's great friend and lifelong correspondent, the Pisan poet and playwright Giovanni Battista Ricciardi. Neither identification, however, holds any weight and the sitter is likely to be an unidentified friend or patron of Rosa's. Such mis-identification of sitters in Rosa's portraits is not uncommon given that many of the artist's portraits incorporate his own features, of which he made endless studies in the mirror.

The portrait has much in common with the so-called ‘testacce’ that Rosa sent from Rome to Florence in 1650–51. Caterina Volpi, who co-curated the recent exhibition at Dulwich and the Kimbell, believes that Rosa painted such head studies probably from the time he left Naples in 1638 and certainly from the beginnings of his sojourn in Florence, where he moved in 1640. However, this painting has most in common with those he painted in Rome in 1650–51 and sent back to his friends in Florence. Some of these are referred to through the many letters Rosa penned to Ricciardi at this time; on 16 January 1650, for example, Rosa had written to him: ‘a quest'hora haverete riceuto l'involto delle Testacce, le quali, senza più lodarvele, dirò che sono degne do voi, e col tempo faranno rumore’.3

These fantasy heads were mainly produced by Rosa for his friends and they are all characterised by broad brushstrokes, stark chiaroscuro and an intensity that lends each of them a directness and presence unlike any other portraits of the time. Such qualities as these look forward to Rosa's great Roman masterpieces of the mid- 1650s: the imposing Belisarius, c. 1657 (Renishaw Park);4 and The Frailty of Human Life, c. 1656 (Fitzwilliam Museum, Cambridge).5

Other portraits related to this painting, probably executed at around the same time, include the Portrait of an unknown man at the Hermitage, Saint Petersburg,6 which, in concept at least, makes for a neat comparison, being full-frontal and the sitter similarly attired; it does not however have anything of the drama and sense of foreboding of either the present work or other testacce, such as that formerly in the Sir Denis Mahon collection.7 With this latter, Mahoney (author of the seminal work on Rosa's drawings) linked the drawing in the collection of Alfred Norman in Paris (fig. 1).8 However a link with the present painting, which was however unknown to Mahoney at the time of publication, seems far more plausible.

The collection put together by Sir Paul Methuen (1672–1757) and his descendants at Corsham in Wiltshire is one of the great English country house collections of old masters. It has been particularly well-known for the many works by Salvator Rosa that it has housed and indeed Tancred Borenius devoted an entire article to this subject in the February 1940 issue of The Burlington Magazine.9 It was Sir Paul, whom Borenius describes as ‘the real founder of the Methuen collection’, who instigated the relationship between Corsham and Rosa when he purchased Tobias and the Angel.10 Since then, seven further works by Rosa have passed through Corsham, four of which, including Tobias, remain there to this day. The present work is first recorded at Corsham in 1761 when mentioned in London and its Environs Described,11 and there it remained until 23 March 1845 when it was sold by the first Lord Methuen to a certain Joseph Hardman of Upper Philimore Gardens, to pay for restoration work to the house.

1 The painting was a late addition to the exhibition, and so is not included in the accompanying publication (H. Langdon et al., Salvator Rosa, exh. cat., London 2010).

2 Salerno (in Salerno 1975) states that he had previously published the painting in 1973. There being no publication bearing his name from this year he presumably means the 1963 catalogue raisonné on Rosa but the painting does not feature in this work. He may have got it confused with another.

3 Langdon 2010, p. 118. A further letter to Ricciardi in February 1651 refers to three more testacce, one for Luigi Lanfreducci and two for Pietro Pandolfini.