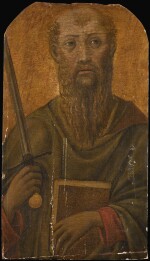 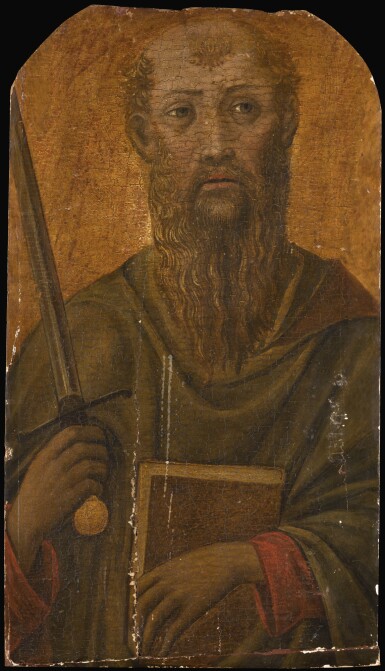 The panel is formed of a single plank and is supported on the reverse with three horizontal metal batons. There are additions along the left, right and lower margins (as described in the cataloguing), which from the front are clearly visible to the naked eye, with retouchings and small losses along the joins. In the original panel there is a vertical split, which runs just left of centre from the lower margin up to the saint's left shoulder, with associated paint losses, particularly in the lower half of the split. There are a handful of vertical retouched surface scratches in his chest and the upper part of the book, the longest measuring approx. 14 cm. long. The paint surface is otherwise dirty and the varnish is discoloured; there is a distinctive horizontal network of craquelure across the surface, which has resulted in a few tiny losses, such as one in the saint's forehead. Inspection under ultraviolet light reveals a thick, milky varnish underneath which retouchings are visible throughout the network of craquelure to disguise its appearance, notably in both the saint's hands, as well as concentrated areas in the top of his head, his left brow, the bottom of his beard, and along each of the joins of the additions. In overall moderate condition.