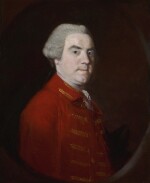 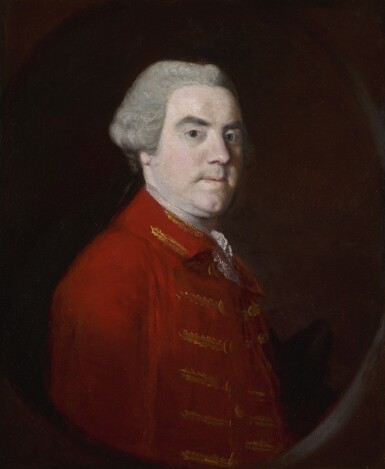 To request a condition report for this lot, please contact oldmasterconditionreports@sothebys.com.

By inheritance to his widow, Elizabeth Alexandrina Grieg Palk;

Thence by descent until acquired by the present owner.

The son of a yeoman family from Devon, the sitter was educated at Ashburton Grammar School before attending Wadham College, Oxford, from which he graduated in 1739. He took Deacon’s orders later that year at Exeter Cathedral, before moving to London in 1741, where he attracted the attention of Sir Robert Walpole. Under Walpole’s patronage he was appointed naval chaplain to Admiral Edward Boscawen, whom he accompanied to India, arriving in Madras in 1748. In 1761 Palk renounced his clerical duties and joined the Council of the East India Company. The same year he married Anne Vansittart, the sister of Henry Vanisttart, Governor of Bengal and rose rapidly within the company, being closely acquainted with both Major-Generals Stringer Lawrence and Robert Clive, successive Commanders-in-Chief of British occupied India. In 1763 he was appointed Governor of Madras, a position he held until 1767 when he returned to England and was elected to Parliament. In 1770 he bought the Haldon estate, near Exeter in Devon, considerably enlarging the house and erecting a tower in the park to the memory of his friend Stringer Lawrence, known as the Lawrence Tower or Haldon Belvedere. Despite being back in England his connection to India continued and Palk maintained a long correspondence with Warren Hastings, by then Governor General of India, for much of the rest of his life.

Appointments with Governor Palk are recorded in Reynolds' sitters book on 29 December 1760 and on six occasions in January 1761. The artist also painted a portrait of Palk’s wife, Anne Vansittart, which is now in the collection of the Museum of Fine Arts, Boston.1