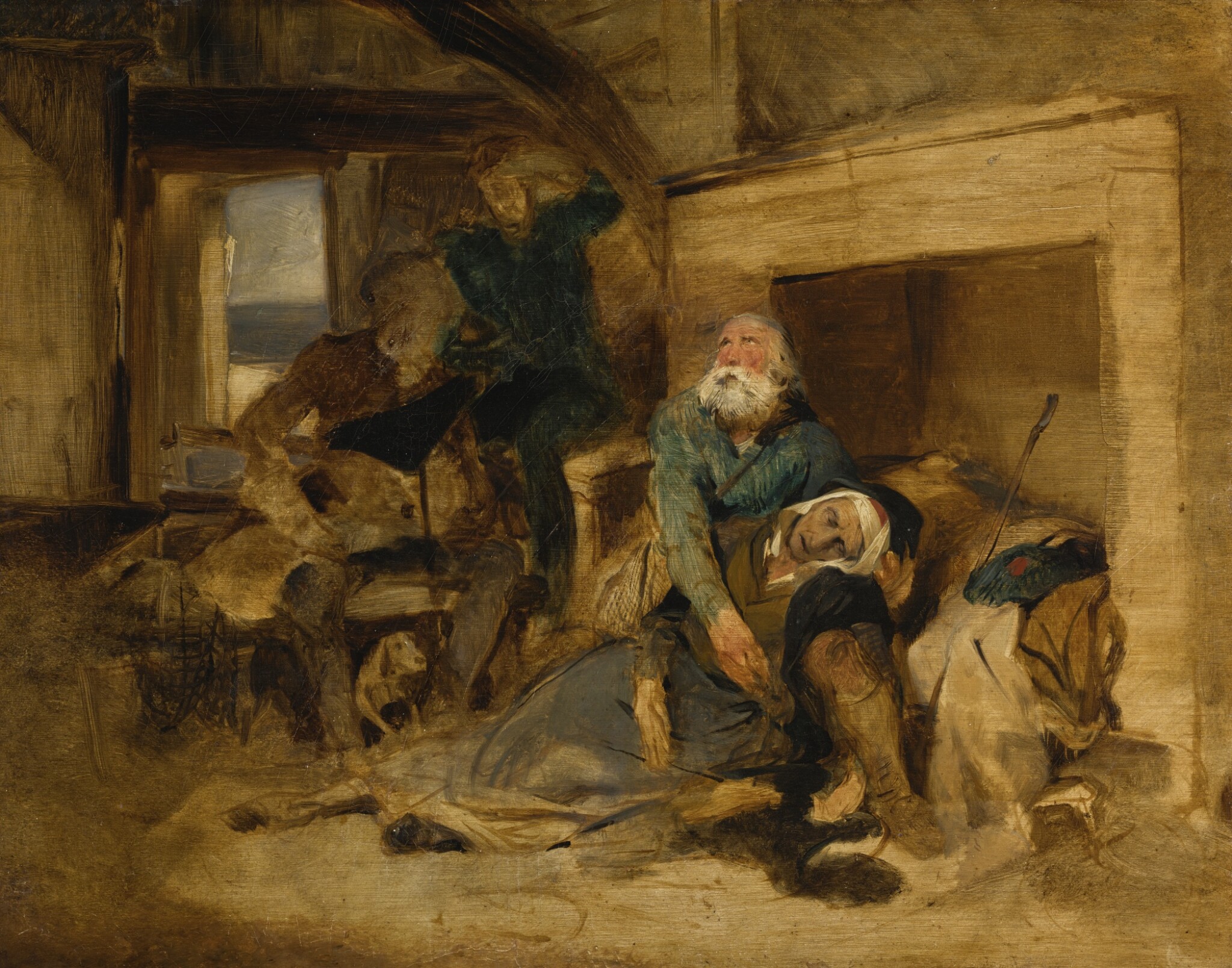 Death of Elspeth Mucklebackit from Scott's The Antiquary

The board is largely flat and stable, though a little bent in the lower left corner, with a slightly dirty surface and discoloured varnish. The network of craquelure has become slightly more pronounced through the centre of the composition, where the paint surface becomes a little uneven and should be secured, and along the lower margin, even resulting in a small loss in the lower left corner. The loose handling of the paint and spontaneous sketched lines are well preserved. Inspection under ultraviolet light reveals a concentrated band of retouching on the left side of the lower margin; some fine lines along some of the network of craquelure in the centre; and to small areas in a few of the darks amongst the figure group. The majority of the composition would appear to remain largely untouched, however.

Offered in a gilt carved wood and gesso 19th century English frame which is in good condition, with only a few chips and losses.

Edinburgh, Royal Scottish Academy, The Monarch of the Glen. Landseer in the Highlands, 14 April – 10 July 2005.

The scene is taken from chapter eleven of Sir Walter Scott’s novel The Antiquary, the third of his Waverley series, originally published in 1816. For nearly a century the Waverley novels were among the most popular and widely read novels in all of Europe, and include such classics of romantic literature as Rob Roy, Ivanhoe and The Fair Maid of Perth. Set in north-east Scotland during the 1790s, The Antiquary was Scott’s own favourite of his novels and one of the most critically well-regarded. The Scottish scholar and literary critic Sir Herbert Grierson wrote in the 1930s of the book: ‘Not many, apart from Shakespeare, could write scenes in which truth and poetry, realism and romance, are more wonderfully presented.’1 Scott himself wrote that his main purpose in writing the book, as with his two earlier novels, Waverley (1814) and Guy Mannering (1815) was to document life in the highlands in the late 18th century and Landseer’s treatment of the scene pays homage to this intention. Even in its unfinished state, the artist’s attention to the clothing and dress of the figures and his atmospheric rendering of the interior of the bothie all demonstrate a shared affinity with the author for the culture and traditions of a fast-fading world.

Sir Walter Scott was a close friend of the artist and a huge admirer of Landseer's work. When Scott was putting together the first forty-eight volume complete edition of his celebrated Waverley novels, published between 1829 and 1833, he selected Landseer as one of the main artists to illustrate it. The present painting is one of two oil sketches of Scott subjects by Landseer which may have been intended for this edition but did not appear as illustrations in the printed volume. The other is a study of Sir Kenneth of the Couchant Leopard’s wounded hound, from The Talisman (sold London, Sotheby’s, 5 July 2012, lot 299). Landseer's actual published contribution to the Waverley edition consists of two frontispieces and vignette designs for five of the title pages. One further work illustrating a subject from one of Scott's novels exists in the form of a print, after a portrait of Catherine Seyton from The Abbot, engraved by C.G. Lewis in 1833 for a series of Scott's heroines.

This beautifully preserved painting is one of a number of early oil sketches, drawings and écorché studies of animals that were bought from Landseer’s studio sale by the amateur artist Charles Mansel Lewis (1845–1931). It has remained in the possession of Mansel Lewis's descendants at Stradey Castle in Llanelly, Wales, and has not been on the market since it left the artist's studio.