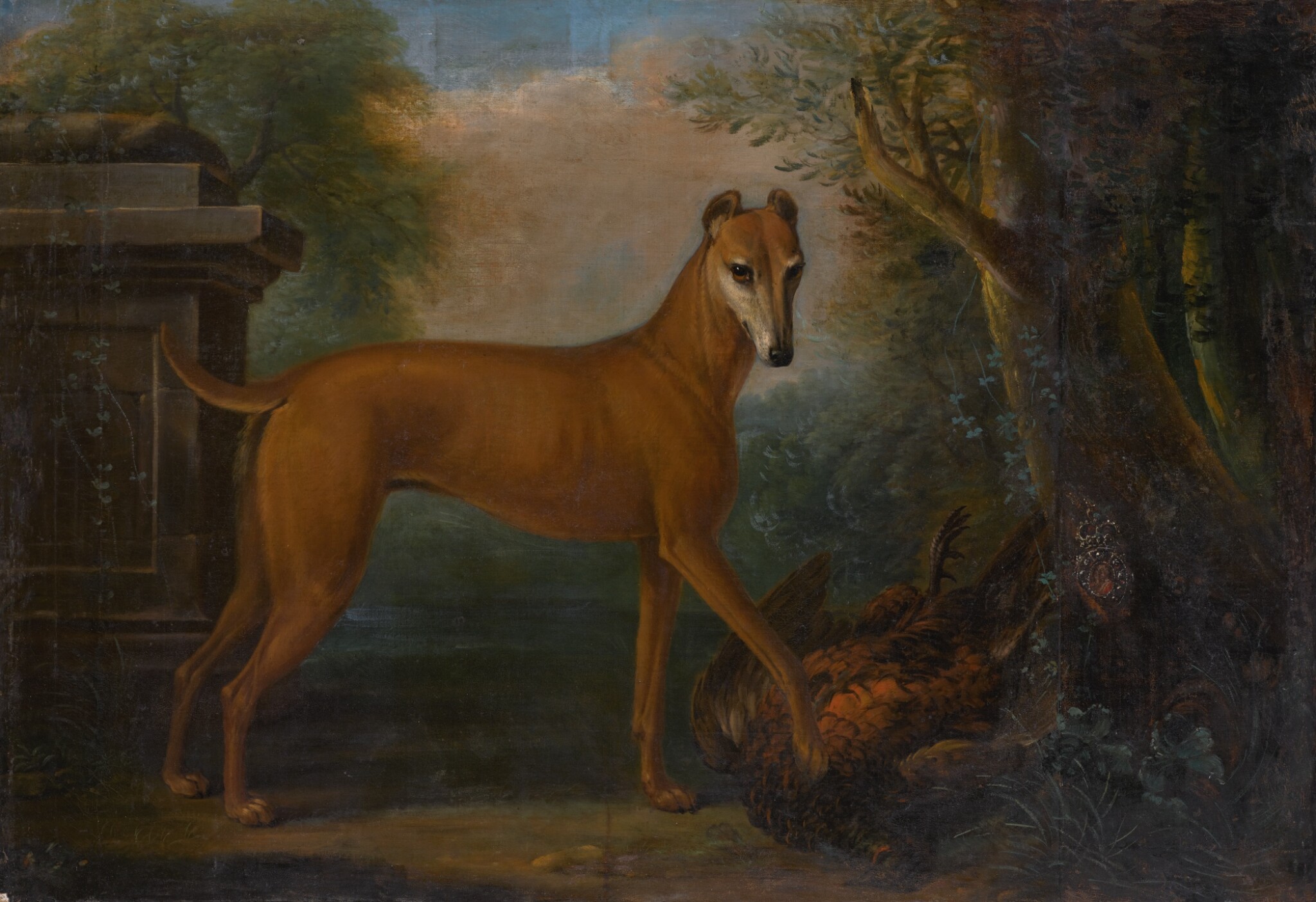 A whippet in a landscape with a dead pheasant

The canvas is lined, the paint surface is dirty and the varnish is discoloured. There is an addition to the right-hand side of the painting (as mentioned in the cataloguing), and there is a visible probable old vertical fold, running approx. 12 cm. from the left margin, with associated retouching and a handful of tiny losses. There is a superficial surface scratch in the centre of the pedestal, approx. 15 cm. long. There is retouching along all the margins, and a few small losses, notably upper left and along the right-hand margin. There is some bitumenisation in the darker pigments of the tree, in the head of the pheasant, in the foreground along the lower margin, and in the base of the pedestal beside the dog's hind legs. There is also a degree of wear visible in the clouds above the dog's back, where the weave of the canvas has become more visible. Inspection under ultraviolet light confirms the aforementioned retouchings and reveals the uneven varnish, which has been cleaned off to a small test area in the centre of the upper margin, and around the seal on the tree trunk on the right. Further retouching is revealed in the clouds along the upper margin, and there is a handful of tiny spots behind the dog, in the pedestal, and two in his neck. There is also retouching to a vertical line running from the centre of the lower margin, approx. 10 cm. long, and some strengthening in the foliage, upper right. The dog itself remains largely untouched and the painting is in overall fairly good condition, which would benefit hugely from cleaning and some further attention.

Wootton’s dog portraits are one of the high points of his art. These two paintings of much-loved hounds are particularly fine examples and exemplify the artist’s subtle use of the mock-heroic form, which lends so much charm to his work in this vein. Wootton’s earliest portraits of gun dogs and hounds are essentially still-life compositions and, in their elegance, relate more closely to Flemish game and flower paintings by Hondecoeter and Peter Casteels than they do to the frenetic bestiality found in the animal paintings of Frans Snyders, Paul de Vos or Jan Fyt. As Arline Meyer discussed in her catalogue of the 1984 Kenwood exhibition, Wootton deliberately understated the animal savagery which these Flemish predecessors considered inherent to such themes, and which his French contemporaries, Desportes and Oudry, never completely concealed even in their most decorative still-lie paintings with gun-dogs and dead game. For Wootton the hound was no savage hunter and the lap dog no mere decorative accessory. Instead, his unsentimental appreciation of the natural instinctive character of these animals enabled him to define their relationship to man with considerable sympathy and affection. In both these paintings the artist has focused attention on the character of the dogs themselves, their alert yet mild disposition.

The early provenance of these two paintings is sadly at present unknown, however both have been similarly extended, presumably to fit a particular decorative scheme, suggesting that they have been together for at least some time. The view of Windsor Castle in the background of the portrait of the red and white greyhound (lot 164) suggests that it may have originally been a Royal commission. Both King George II and his estranged son, Frederick Prince of Wales, were patrons of Wootton and commissioned a number of racing and hunting scenes from the artist, as well as portraits of celebrated racehorses. However, a similar view of Windsor Castle is also found in the background of a portrait of a Spaniel and Hound by Wootton now at Althorp. This painting was probably originally commissioned by Sarah, Duchess of Marlborough, and included in the very considerable legacy left to her younger and favourite grandson, John Spencer (1708-46), father of the 1st Earl Spencer, including the pictures from his grandmother’s lodge in Windsor Great Park. It was John’s elder brother, Charles 3rd Duke of Marlborough, who commissioned, circa 1733, the magnificent series of hunting scenes which still decorate the hall at Althorp, rivalled in scale and importance only by the similar sets at Longleat and Badminton; and Wootton also worked for Sarah’s daughter, the Duchess of Montagu, for whom he painted a portrait of a pet dog in 1735.

Wootton was regarded by his contemporaries as without rival as a sporting artist, and he enjoyed an extensive network of patronage that seems to have been unaffected by family or party loyalties. As well as the King and the Prince of Wales, Sir Robert Walpole, who commissioned Wootton for paintings to decorate the walls of both Houghton Hall and Downing Street (including a portrait of his favourite Italian greyhound Patapam), was as happy to patronise the artist as were members of the Opposition. Among his grand aristocratic clients he could list the Dukes of Beaufort, Devonshire, Newcastle, Bedford, Marlborough, Bolton, Rutland, Richmond and Leeds (both the 3rd and 4th Dukes), as well as the great connoisseur and banker Henry Hoare of Stourhead. Possibly his greatest and most exalted patron, however, was Edward Harley, 2nd Earl of Oxford, for whom he painted at least six portraits of dogs, among over forty paintings commissioned from him by Harley. Other fine examples of Wootton’s dog portraiture include the Duke of Hamilton’s Jewell (Sotheby’s, New York, 26 January 2017, lot 274), from circa 1720; and a portrait of a Grey Spotted Hound – probably an early version of the breed now known as an English Pointer (Yale Centre for British Art, New Haven), painted circa 1738.