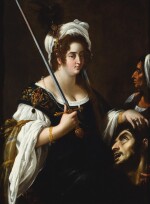 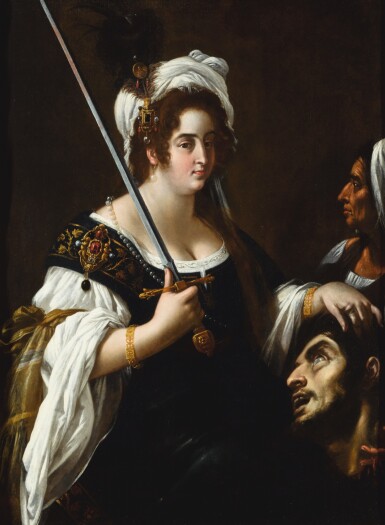 GIOVANNI BAGLIONE | Judith with the head of Holofernes

GIOVANNI BAGLIONE | Judith with the head of Holofernes

Judith with the head of Holofernes

The canvas is lined, and the paint surface is clean with a clear and even varnish. There are no major damages visible to the naked eye and the painting appears to be in good overall condition. The is a slight degree of wear in the flesh tones of Judith's forehead and chest with associated retouchings to minimalise its effect. Inspection under ultraviolet light reveals a varnish that fluoresces opaque. It also reveals a series of sensitively executed restorations, which are predominantly throughout the white of Judith's sleeve and turban. The aforementioned retouchings in her flesh tones are confirmed, notably her neck and right breast. Otherwise there are just small, scattered retouchings.

Acquired by the present owner in December 2001.

Only discovered prior to the Sydney/Melbourne exhibition of 2003–04 (see Literature), Judith with the head of Holofernes is an important addition to the œuvre of Giovanni Baglione. This canvas is one of a group produced in the artist's maturity that he painted in response to the revolutionary works of the young Caravaggio; its date of execution has been a subject of debate. John T. Spike (see Literature) believes this Judith to have been executed post 1610, in the wake of Orazio and Artemisia Gentileschi's own interpretations of the subject. Gianni Papi, in his 2006 analysis of this painting (see Literature) also dates the execution of the present work to between 1610–15 and draws stylistic comparisons with Baglione's 1608 treatment of this subject in the Borghese collection, Rome;1 with his Ecce Homo, also in the Borghese collection but currently on loan to the Castel Sant'Angelo, Rome;2 and with his Saint Sebastian in the Mary Jane Harris collection.3 Papi notes that closer still is a painting by Baglione of an obscure allegorical subject, whose whereabouts are unknown; it is known from photographs.4 Along with many stylistic similarities, that painting also shares with the present canvas the inclusion of significant pieces of jewellery. The pair of gold link bracelets here are seemingly exactly the same as those included in the allegorical scene; they were perhaps in Baglione's possession and used as a studio prop.