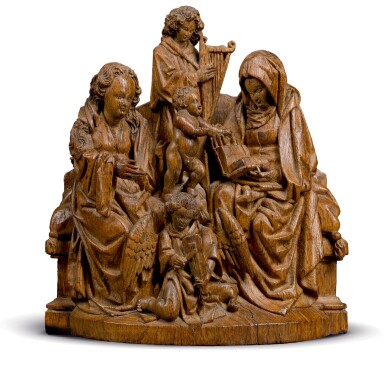 oak, on a later wood base

Overall the condition of the wood is good, with minor dirt and wear to the surface consistent with age. The Child's proper right hand is lost. There are a few minor losses, including to the Virgin's proper right index finger and to a fold of Saint Anne's wimple. The Virgin's proper right hand is carved separately and could possibly be a replacement. The Child's proper right arm could also possibly be replaced, and there is a wood insert at his proper left shoulder. There is minor stable splitting to the wood throughout, consistent with the material, including a more prominent split running beside Saint Anne's proper right side through the bottom Angel's proper left wing joint and the front of the base on the right side. Some of the splits have been filled with wax. There is very minor evidence of past worming, notably to the throne on the left side. There are indents to the upper Angel's back, probably for now-lost wings. There are two small holes to the top of the throne at the back. There are three holes to the underside with which the sculpture slides onto dowels on the later wood base.

There is some wear to the base, including a few dents at the front, a few chips, and several small holes at the back. There are three metal mounts at the back of the base.

deaccessioned by the museum in 1984;

acquired from the above by the present owner

This charming group of Saint Anne, the Virgin, and the Child, surrounded by music-making angels, shows several aspects that firmly place its origin in the Northern Netherlands around the turn of the 16th century. The elaborate curls on both the angels and the Virgin show similarities with the work of Adriaen van Wesel, active in Utrecht at the end of the 15th century. Compare, in particular, to a relief by Van Wesel in the Rijksmuseum, Amsterdam, of Mary, Joseph and Three Angels, which also appears to be thematically similar (inv. no. BK-NM-11647). The faces on the present relief, however, date the relief slightly later: the high foreheads and double chins indicate an influence from the Utrecht Master of the Stone Head, active in the early 16th century. Further comparison can be found in the manner of carving of the curls - compare the hair on the Virgin with that of Christ as Salvator Mundi in Museum Catharijneconvent (inv. no. ABM bh357).