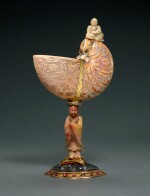 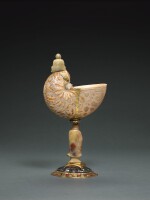 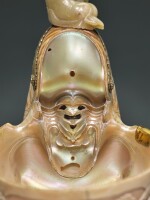 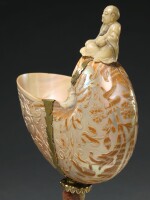 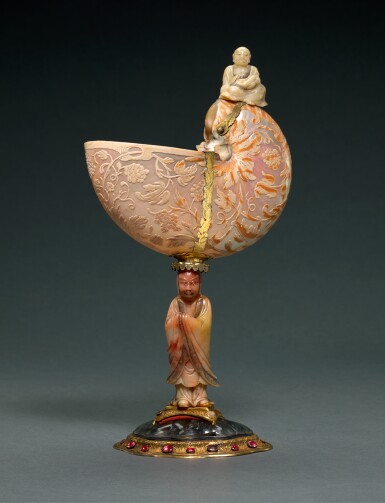 There is minor tarnishing to the gilt mounts throughout. The 'cushion' and the lower soapstone figure rotate slightly in their settings. A reddish wood mount is visible underneath the 'cushion'. Two of the pastes on the cushion appear to be replaced; one appears to be a soapstone fragment. There is an open split with a minor loss to the rock crystal, and the rock crystal is not quite even with its setting.

Please note the following amendments to the printed catalogue: This lot contains endangered species. Sotheby's recommends that buyers check with their own government regarding any importation requirements prior to placing a bid. For example, US regulations restrict or prohibit the import of certain items to protect wildlife conservation. Please note that Sotheby's will not assist buyers with the shipment of this lot to the US. A buyer's inability to export or import these lots cannot justify a delay in payment or sale cancellation. Please note that the soapstone figures should be dated as 'Early Qing Dynasty' and not as stated in the printed catalogue.

private collection, the Netherlands, acquired from the above

Carved and mounted nautilus shells were among the most sought-after Kunstkammer curiosities in European collections. This intriguing Nautilus Cup exemplifies the sense of exoticism with which these enigmatic objects were perceived. The magnificent carved shell is a rare example of its kind. Of large size and with elaborate cameo relief, it is further exceptional for the helm carved into its inner chambers.

Trade and exploration beginning in the late 16th century fostered a fascination for exotic and rare materials, particularly among the seafaring countries of Europe, including the northern Netherlands. The arrival of these rare and often valuable animal and vegetable materials on European shores encouraged the foundation and development of artists who made sculpture, objets and everyday wares, incorporating these materials into their creations. The carving of shells was particularly prevalent in Amsterdam, where the famous Bellekin family of shell carvers created some of the craft’s finest works.

Shell carvers turned thick-walled shells into works of art by peeling away at the surface to reveal their nacreous layer. The technique used to achieve cameo relief, in which the striped outer layer of the nautilus stands out against the pearlescent background, was etching. With its elaborate cameo carving depicting intertwining foliate tendrils and vine, the present nautilus relates to works signed by members of the Bellekin family from the second half of the 17th century. Compare, for example, the cameo decoration of the celebrated nautilus shell signed by Jan Bellekin from the collection of Sir Hans Sloane, now in the Natural History Museum. Particularly close stylistic parallels for the carving of the present shell are found in unmounted shells by anonymous makers in Brunswick (Herzog Anton Ulrich-Museum) and Vienna (Kunsthistorisches Museum, inv. No. 4133), both dated by Mette (op. cit., p. 206) to the mid-17th century, as well as a third example published by Georg Laue (op. cit.). It is likely that these were created in the same milieu as the Bellekins.

According to Hugh Tait (op. cit., p. 99), ‘few nautili with pierced helms have survived’, making the present nautilus a valuable testament to this legendary carving technique, which utilises the natural chambers of the inner shell. Famous examples of nautili with exceptional openwork helms are the above-mentioned Hans Sloane shell, an unsigned mounted shell preserved in the British Museum as part of the Waddesdon Bequest (inv. no. WB.116), and a number of nautili by Cornelis Bellekin, including one sold in these rooms on 5 December 2017 (lot 102). Although it is not as elaborately pierced as the helms in the above survivals, the presence of a helm carving on the present shell is testament to its maker’s remarkable skill.

Like similar surviving examples, the nautilus may once have been unmounted. Its present mounting as a cup showcases the cameo relief and helm carving to dazzling effect, while the Chinese soapstone figures forming the stem and surmounting the shell highlight the exotic nature of the nautilus. It is unclear when the shell was mounted in its current form, but this must have occurred prior to 1859, when the Cup was sold as part of the J. Moyet collection in Amsterdam. Datable to the early Qing Dynasty, the soapstone elements would have been made before the 1720s, and the silver-gilt and rock crystal foot, as well as the orientalising cushion, may possibly have a similar dating. The mounts holding the shell in place appear, however, to date to the 19th century, so it may be argued that older elements were used to create a striking Kunstkammer showpiece for a growing community of collectors. As such, the Nautilus Cup is reminiscent of works from the fabled Rothschild collection which later became the Waddesdon Bequest - perhaps the ultimate Cabinet of Curiosities of the 19th century.