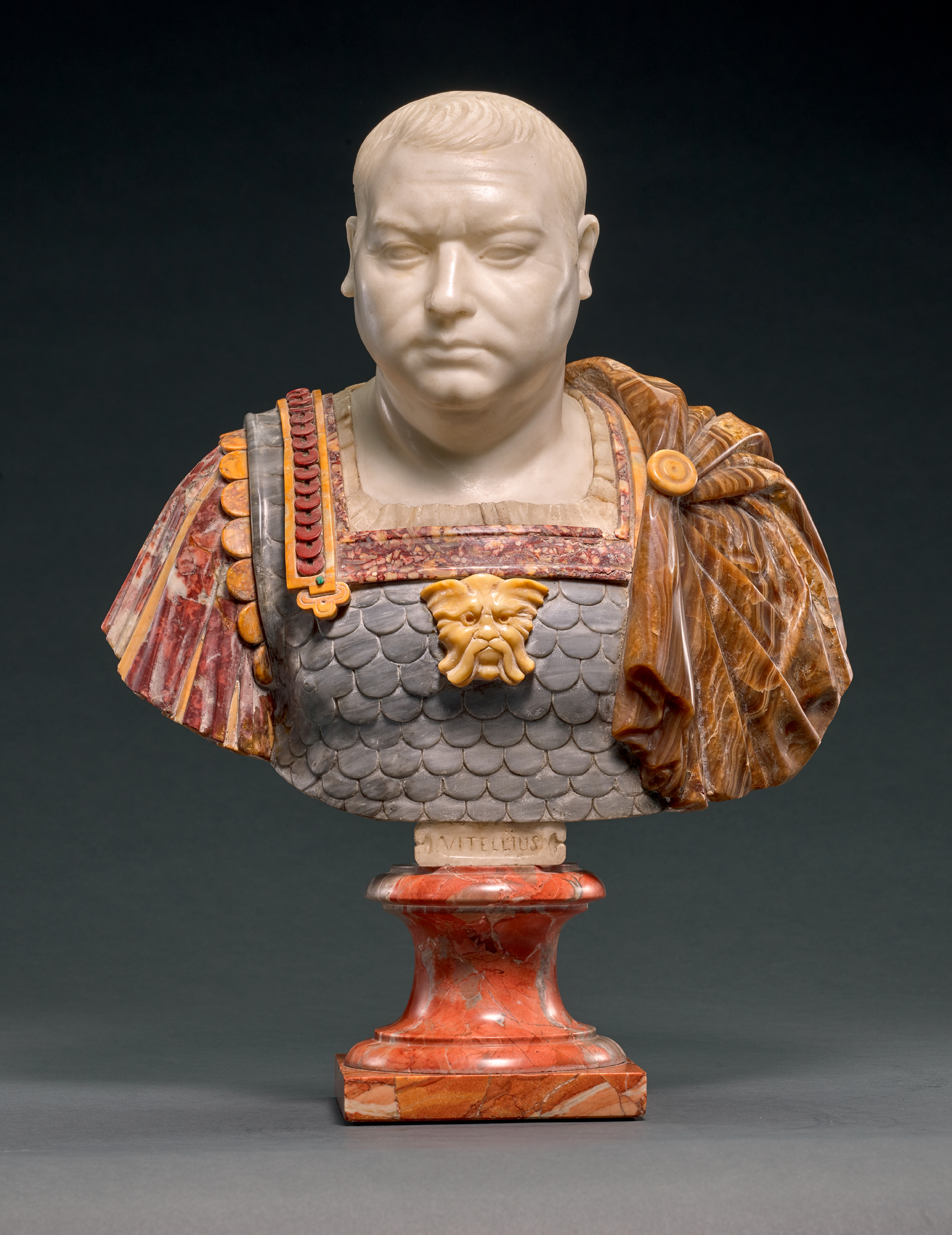 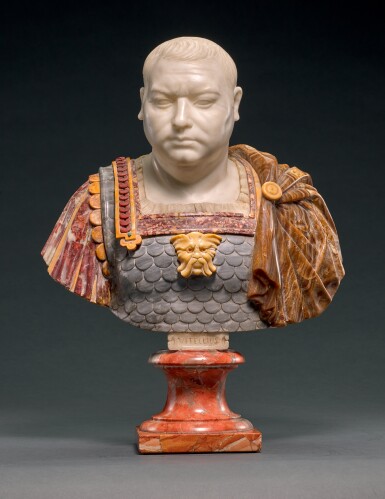 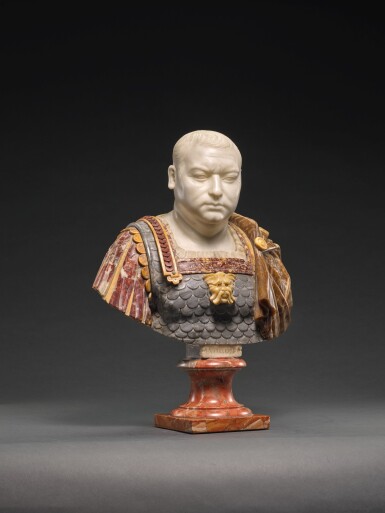 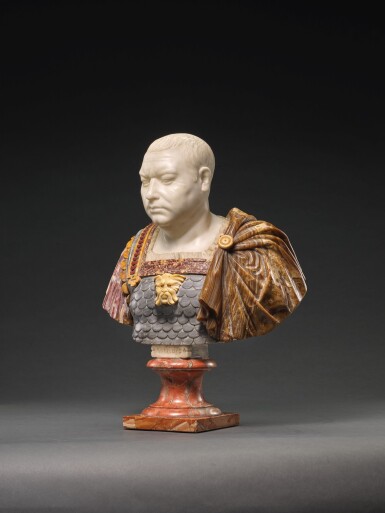 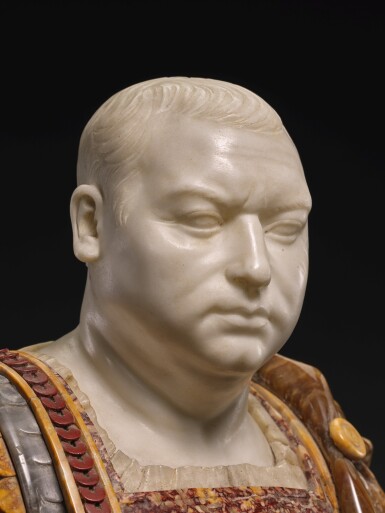 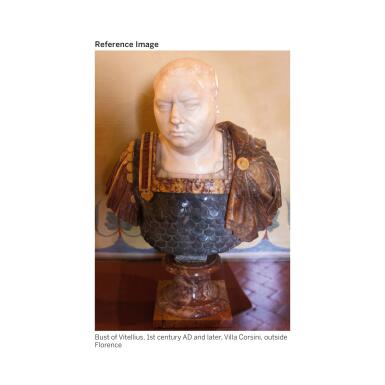 inscribed to the socle: VITELLIUS

Overall the condition of the marble bust is very good with minor dirt and wear to the surface consistent with agel. The bust is composed in sections, consistent with the technique of making mixed marble busts. There are visible joints to the truncation of the bust at the back (the presence of plaster suggests these joints may have been restored). There is a small loss to the onyx drapery at the back and there appears to be a restored break here. There are a few splashes of dirt to the white marble head. There are a few small chips, including one to the strap across the proper right shoulder. There is a small possible loss to the horizontal strap at the upper chest. There are a few small chips to the socle. There is veining to the different marbles consistent with the materials, including a few slightly open veins to the socle.

This unusual and sophisticated bust of Vitellius is the subject of an expertise by Dottssa. Annamaria Giusti (2015), who proposes an attribution to Francis Harwood, the Anglo-Florentine sculptor famed for his copies after the antique and, in particular, for his work in coloured marbles. The bust is an exact replica of a known model, formerly in the Medici collections, exhibited prominently for many years in the Tribuna degli Uffizi. It is described there in an inventory of 1635, no. 340. The head is most likely antique, dating to the 1st century, and it is set into a torso of coloured marble, which must pre-date the 1635 inventory entry. It is currently on display at the Villa Corsini, outside Florence.

Our bust faithfully reproduces the marble in the Villa Corsini, with similarly rare and high quality coloured marbles used for the details of the armour. The facial features are also carefully replicated. The grey armour, made of Bardiglio marble from Tuscany, has exactly the same shape as the original, and has the same number of 'scales'. The present bust preserves a mask to the centre of the chest, which has been lost on the Corsini model. The faithful copying of the model and the use of specialised coloured marbles points towards a skilled sculptor, who was experienced in copying antique models, and had a flair for using different types and coloured marbles. Due to the use of distinctly Tuscan marbles, and considering its prominence of the original during the heydays of the Grand Tour, Florence is certainly the most likely origin for its creation.

From numerous contemporary accounts it is clear that Harwood would have been eminently placed amongst the late 18th century sculptors in Florence to have had access to the high quality coloured marble which have been selected to emulate the colourful original. Antonio Canova, on a visit to Harwood's studio in 1779 notes how the British sculptor uses 'varie pietre' (quoted in Honour, op. cit. p. 513), and Harwood himself also noted he made vases of 'all courlerd marbles' (ibid., p. 513). Also important to note is the monument to William, 2nd Earl Cowper, in Hertingfordbury's Parish Church, which Harwood made on commission and which includes many different types of marble, including Sienese Giallo marble and Nero di Portovenere. A detailed account of the coloured marbles used for this monument was published in the Gazzetta Toscana 16 June 1770, which would have contributed to establising Harwood's reputation for high quality works in coloured marble, available on commission (the full account is published as an appendix in Belsey, op. cit., p. 66). Considering the Neo-classical preference for white marbles, Harwood was one of few sculptors actively working with coloured marbles at the time, which supports the attribution of the present bust.

Although the carving of the hair is handled differently here than in Harwood’s signed marble bust of Faustina, lot 109 in this sale, this is accounted for by the original model that is being copied in which the shallowly carved wavy hair is comparable. The realistic anatomy of the ears and the precise delineation of the eyelids are all consistent with Harwood’s style. Compare also the treatment of the eye brows and the lines around the eyes with Harwood's extraordinary black marble Bust of a Man, now in the Getty Museum (inv. no. 88.SA.114). In her expertise, Dottss. Giusti suggests the present bust must have been created before 1778, when it was removed from the Tribuna and would have lost some of its prestige. Assuming the present bust to have been made on commission, it is distinctly plausible that the patron would have turned to the pre-eminent sculptor of antique models most experienced with coloured marbles, which at this time was Francis Harwood. In the light of a fuller appreciation of Harwood as the sculptor of the powerful Getty bust and the attribution to him of this idiosyncratic coloured marble bust of Vitellius, Fleming and Honour's faint praise for Harwood as a sculptor of 'such stuff as footnotes are made on' (op. cit. p.510), perhaps needs to be reassessed.