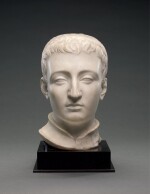 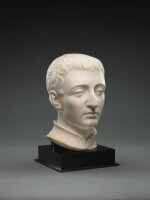 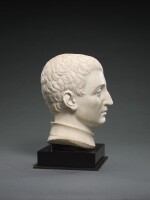 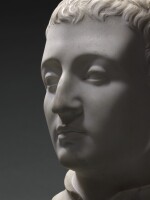 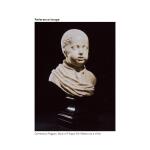 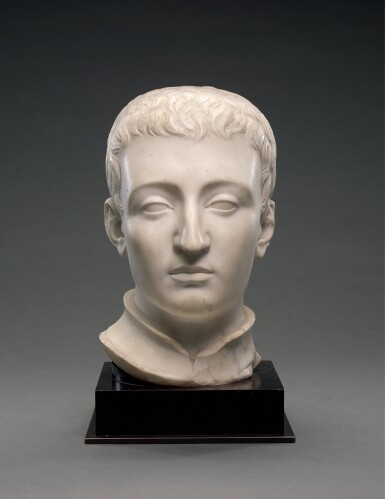 marble, on a wood and metal socle

Overall the condition of the marble is good, with minor dirt and wear to the surface consistent with age. There are some chips and minor losses, notably to the proper left ear, the collar, and around bottom edge. There is a wellconcealed reattachment (with some restoration) to the tip of the nose. There are a few minor abrasions, including to the proper right ear, the chin, and the proper right cheek and temple. There is slight texturing to the surface of the hair. There is some slight natural veining to the marble, notably at the collar on the proper left side. There are a few small marks and residues to the back of the

head. Though partially finished on the underside, the head may have been conceived to be inserted into a bust or full figure. There is minor wear to the ebonised wood base.

The attribution of this delicately carved head to Domenico Poggini is supported by the close comparisons with the bust of Filippo de’ Medici as a Child, sold in these rooms 5 December 2012, lot 42. Previously with the Heim Gallery (op. cit.) the latter was published by Karla Langedijk in 1974 and 1983. The shallow carving of the wavy tufts of hair have striking affinities in both busts, the blank eyes and defined eye brows are also similar. However, the fragmentary condition of the present bust prevents a complete comparison of the drapery, although the simple turned up collar is analogous.

On occasions Poggini handles hair with more volume and undercutting, such as in the standing New Testament female figure in the Bargello (inv. no. 182) or the figure of Bacchus in the Metropolitan Museum of Art (inv. no. 41.190.269), but closer examples to the present bust can be identified such as the bust of Virginia Pucci Ridolfi (Bargello) and, above all, the bust of Francis I de’ Medici in the Uffizi. A possible identification of the present bust with another member of the Medici family, Pietro de’ Medici, is an intriguing possibility when compared with the portrait from the circle of Bronzino, formerly in the Rose Art Museum, Brandeis University, sold Christie's New York, 4 November 1983, lot 70.