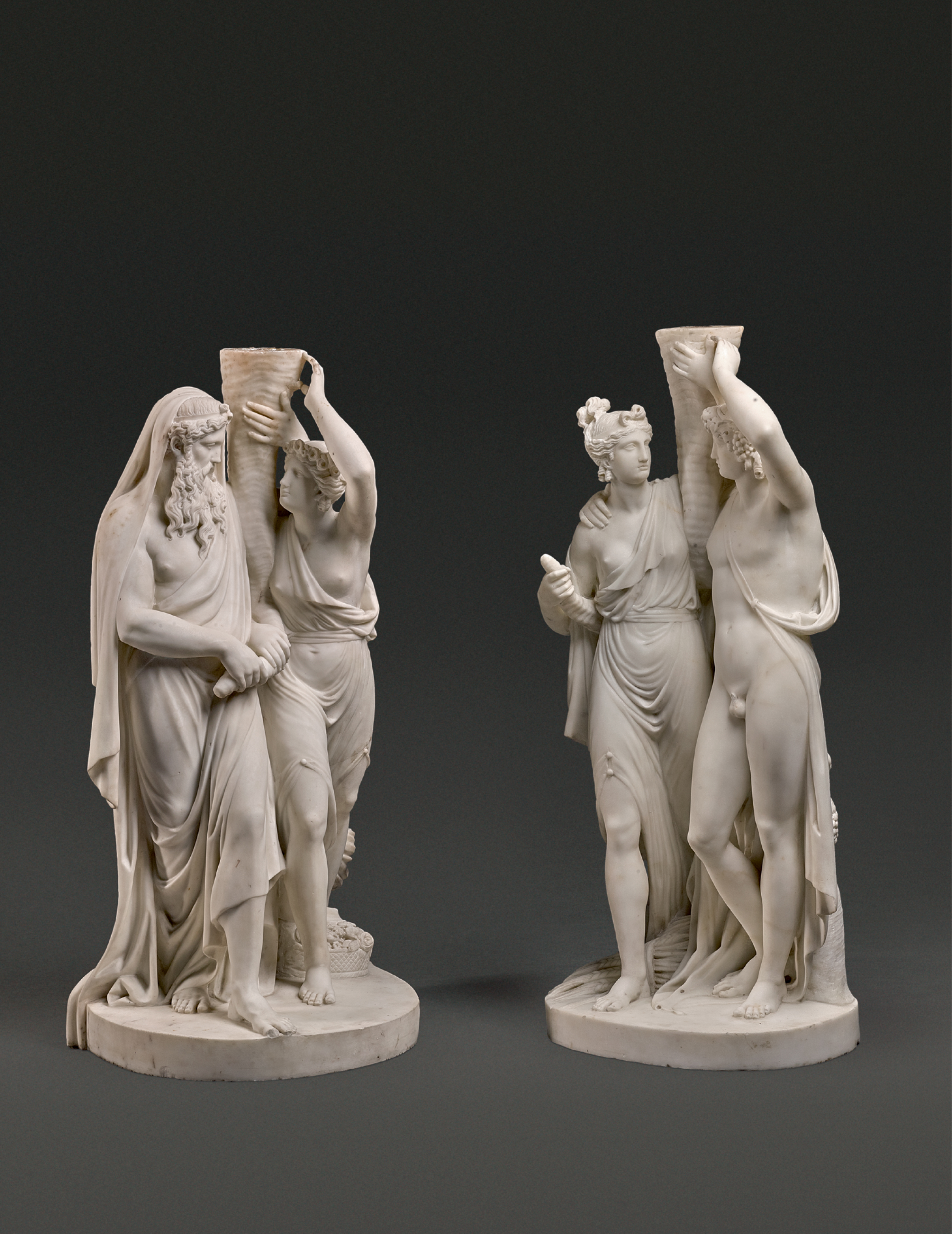 PAIR OF DIONYSIAC GROUPS WITH CORNUCOPIA SUPPORTS, PROBABLY FOR CANDELABRA

Overall the condition of the marbles is very good with minor dirt and wear to the surface consistent with age. There are a few small losses, including the little finger of the Bacchante next to the bearded man; the tip of the bearded man's proper left big toe; and the penis of the youth on the other group. The youth's proper left little finger is reattached in two places. There are a few areas where the marble has been carved thinly and small holes have appeared: in the drapery between the youth and Bacchante and in between the legs and the drapery to the left of the other Bacchante (with bearded man). There is minor natural veining to the marble consistent with material, these include a restored slightly open vein at the proper left thigh of the Bacchante (with bearded man). There are minor naturally occurring inclusions to the marble, including one at the feet of the youth and Bacchante and the raised arm of the other Bacchante. There are some small chips and abrasions around the bases. There are a few further minor abrasions. There are glue residues and fill to the tops of the cornucopiae probably for now lost mounts (such as candelabra).

These beautifully carved marble groups are typical examples of the very high quality marble statuary executed in Rome around 1800 for visiting Grand Tourists. In terms of their quality they compare with the finest output of the period, particularly the work of Carlo Albacini who was active between circa 1770 and 1813. Compare with Albacini's copy of the Capitoline Flora in the Indianapolis Art Museum (illustrated in Walker, op. cit., p. 226, no. 104). Albacini, active in Rome, was one of the most prominent sculptors within the Anglo-Roman Neoclassical milieu, and many of the restored antiquities which entered English collections would have been restored or copied by him. Counting the famed collector and antiquary Charles Townley, Catherine the Great, and the King of Naples amongst his clientele, it is curious not more is known about Albacini's life and work. A student of Bartolomeo Cavaceppi (circa 1716-1799), also renowned for high quality restorations and reproductions of Roman originals, Albacini quickly established an international reputation.

Albacini was responsible for numerous double figure groups. Compare, for example, the chimneypiece with Cupid and Psyche and Bacchus and Ariadne from Ickworth, Suffolk, which has been attributed to Albacini and was sold in these rooms on 26 November 2003, lot 87. Albacini is principally known for his copies after the antique as well as his restorations of antiquities. However, he operated a large workshop which was also responsible for decorative marbles including chimneypieces. Given the high quality of the present groups and their double figure configuration, an attribution can be made to Albacini or to sculptors working in his workshop under his supervision. The diadem of the bacchante paired with the bearded Dionysos recalls works by Canova and Thorvaldsen, arguably pointing to a dating towards the end of Albacini's life, circa 1800-1810. The presence of the the wheat sheath on the ground in one of the groups and the bearded Dionysos in its pendant could indicate that the groups were conceived as allegories of Autumn and Winter. The marbles were almost certainly designed to support candelabra, given the fact that they are centred on cornucopia. The two groups are in excellent condition and preserve their original surfaces.