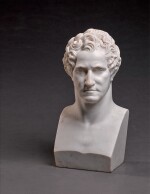 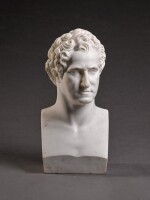 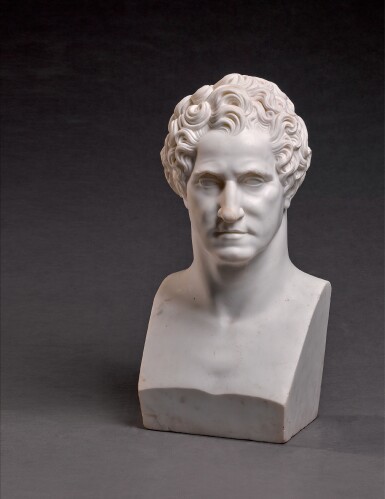 Overall the condition of the bust is very good with minor dirt and some wear to the surface consistent with age. The tip of the nose has been reattached. There are some naturally occurring inclusions to the surface in areas, including to the proper left cheek and to an area on the proper left side of the neck. There is minor veining to the marble, consistent with the material, including some slightly darker veins around the sides of the truncation, to the proper left side of the neck and to the front of the bust to the proper right side. There are dark specks of dirt in areas, in particular to the chest at the front and to the shoulders at the back. There are a few minor chips, in particular around the edges of the bust, and there is a chip to one of the curls behind the proper right ear. There is particular dirt to the crevices of the hair.

This marble bust of Washington relates closely to another version of the model in the collection of the White House. Both busts, carved with bare chests all'antica and squared bases, are after Guiseppi Ceracchi's portrait of Washington in the Metropolitan Museum of Art (inv. no. 14.58.235). The White House bust has been dated to circa 1815. In 1809 Thomas Appleton, the American consul at Livorno, acquired the original plaster model of Ceracchi's portrait from his fellow Consul, William Lee in Bordeaux. Lee had multiplied the likeness on a small scale before he sold the plaster, and Appleton continued to do so, exporting the busts to the United States for sale. In 1816 Appleton paid the sculptor Massimiliano Ravenna 100 francs for four "Busts of Washington to be Deliver'd & Afterwards to be sent to the U. S." They were to be sold for $80 each. Appleton later sent four larger-than-life and two colossal versions of the portrait. It seems likely that the present bust, like the White House version, can be identified as one of the four busts commissioned by Appleton in 1816. Another version of the model was sold at Christies New York for $83,650 (15-16 January 2004, lot 522.)