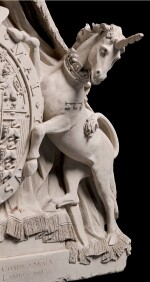 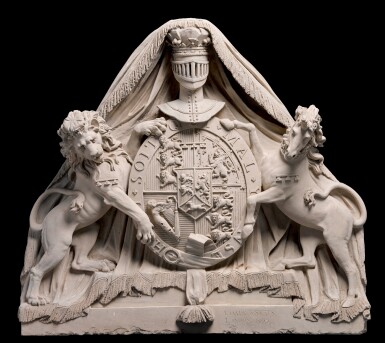 PEDIMENT RELIEF WITH THE ROYAL ARMS OF GEORGE III

Overall the condition of the Coade stone is good with minor dirt and wear consistent with age. There are a few small losses, including the ears of the unicorn, the top corners of the cross on the crowned helmet and the cross on the lion's crown. The surface appears to have once been partially painted, and there are some old slightly unstable paint residues, particularly around the crowned helmet and to the canopy. Dust and dirt is collected in the crevices, particularly in the coat of arms. There are a few small losses to the lettering of the word ‘pense’. There are some chips along the bottom edge. There may be some small losses to the unicorns mane. There are particular dirt residues to the lion's mane and there is some minor staining. The unicorn's horn is loose. There is an area of staining under the coat of arms on the right side. There is some blue paint or crayon marks to the unicorn's nose. The surface of the canopy at the very top is abraded.

Much mystery surrounds the life of Eleanor Coade and her decision to venture into the business of artificial stone manufacturing. Her famous Coade Factory was based in Lambeth, London, which is now part of the area occupied by the Southbank Centre. From 1789 until his death in 1813, Mrs Coade partnered with John Sealy, which is why the present work is marked Coade & Sealy. Throughout its history spanning from 1769-1840, the factory produced a vast array of products such as architectural and garden ornaments, decorative details, statues and monuments. ‘Coade stone’ as it is known was of exceptional quality, and was the only kind of artificial stone at the time to be resilient to frost and other forms of harsh outdoor exposure. The high standards of design and quality upheld by Coade were noticed by London’s most highly regarded 19th century architects including Robert Adam, James Wyatt, John Nash and Sir John Soane, each of whom commissioned works. Coade’s most prestigious work was at Buckingham Palace which was rebuilt by Nash in 1825.

The artificial stone produced by the Coade Factory was unique in that it was a ceramic material containing a large proportion of ground pre-fired stoneware with a glass stabiliser added to it, which was rolled into sheets and pressed into reusable moulds. Because most works were cast in sections before firing, they could easily be altered to suit the client’s individual wishes. For example, the mould for the statue of Urania could be transformed into Flora when flowers were added to it. Mrs Coade’s energy and enthusiasm for promoting her business is reflected in a catalogue that she published in 1784 listing 778 available items. The Royal Arms of George III can be found listed in this catalogue under ‘XIV Coats of Arms, 429 His Majesty’s on a Pannel’ (4 feet 6 in. by 3 feet 10 in.) and was priced at £15 and 15 shillings. In addition, number ‘431 A Plume of Feathers’ (2 feet 4 in. high) could be included for £2,12 shillings and 6 pence.

The Coade Factory received the Royal Warrant to supply some commodity or service, and was therefore allowed to display, create and sell the Royal Arms. George III's Royal Arms were supplied for other Warrant-Holders, amongst others in Bond Street, Holborn, Charing Cross, the Strand, St James' Street and Piccadilly. Kelly (op. cit. pp. 274-5) illustrates two reliefs with Royal Arms Rampant (as opposed to couchant, where the lion and unicorn are lying down), of which one, on Beverley Sessions House, Yorkshire, is also dated to 1807.