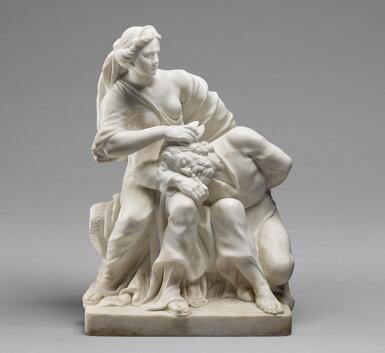 Overall the condition of the marble is very good, with minor dirt and wear to the surface consistent with age. The surface is a little dry. There are a few very minor abrasions, including to the tip of the woman's nose, her proper right sleeve, and her headscarf. There is some light staining to the marble in areas and there is some dust in the crevices.

Most of Utrecht-born Willem Hendrik van der Wall's works survive in terracotta or wood in Dutch public collections. A pupil of Jacob Cressant and Jan Baptist Xavery, van der Wall created allegorical and religious statuary, mostly for church interiors. The Amsterdam Rijksmuseum and the Utrecht Centraal Museum both own casts of his allegorical figure of Charity (inv. nos. respectively BK-NM-92780 and 12272), the Rijksmuseum further has a Faith (inv. no. BK-NM-9278) which shows similarities in pose and drapery to the Delilah in the present lot, and a Hope (inv. no. BK-NM-9279), which all appear to be part of the same series.

Groups in marble by the sculptor are rare, however two such figures are in the Centraal Museum, depicting Galatea (inv. no. 9922), dated 1782, and another Hope (inv. no. 25721). Compare Galatea's facial features and carefully delineated hair with diadem to Delilah in the present group. The Samson and Delilah forms an important addition to the sculptor's oeuvre, showing his skill in carving marble on the small scale. A late work, dated only four years before his death in 1790, it further shows a careful move away from the genre sculpture of his former teachers, moving towards a more academic classicism.