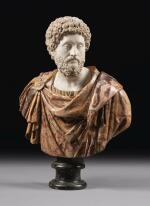 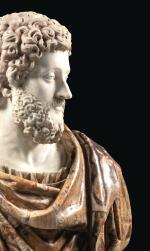 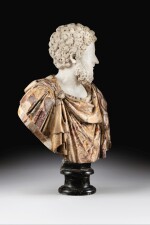 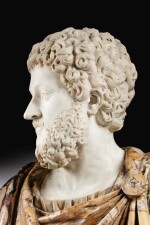 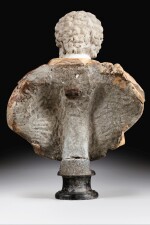 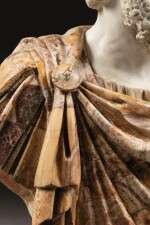 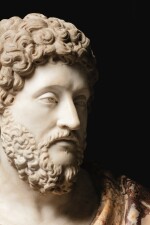 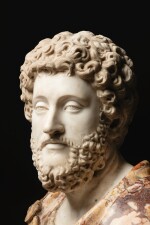 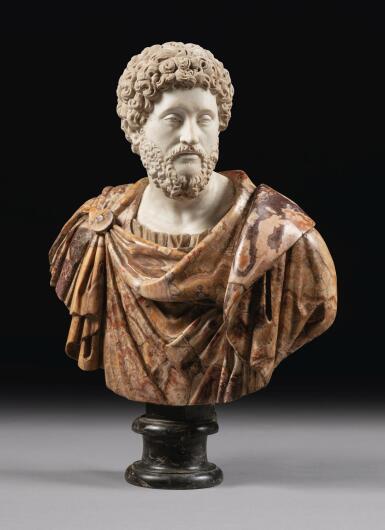 Overall the condition of the marble is very good, with minor dirt and wear to the surface consistent with age. The mixed marble torso is composed in sections and original joints are slightly visible. Some of the joints appear to have been later consolidated. There are also a few possible replacements, including two areas of yellow marble at the proper left shoulder. The clasp of the cloak is later. The back of the bust is made of a form of cement and there is a piece of iron cemented into the centre of the back. There is a restored break at the back of the neck of the white marble head. There is general minor wear to the surface to the high points of the hair. There is particular dirt to the open chest.

This powerful bust of the Emperor Commodus is broadly inspired by ancient portraits of the ruler of which an example is the bust in the Sala dei Busti of the Musei Vaticani, Rome (inv. no. 706). The present portrait shows Commodus dressed in the guise of a military general, wearing a tunic, a cuirass and a paludamentum, all in luxuriant Alabastro fiorito. Compare particularly with the portrait bust of Commodus at Houghton Hall, which was originally in the Albani collection before being acquired by Robert Walpole (note the positioning of the incised irises). The present bust differs, however, from ancient examples in that the head is turned to the sinister rather than the dexter. More pertinently, it diverges in the more stylised treatment of the hair, with broader curls created with a claw chisel, which specifically recalls Roman baroque sculpture. Analogous Emperor busts with sumptuous coloured marble torsi were created by members of the Della Porta family in the second half of the 16th century. Compare particularly with the work of Giovanni Battista Della Porta (1542-1597) who was active in Rome and was responsible for the series of Emperor busts in the salone d'ingresso of the Villa Borghese (Ioele, op. cit., figs. 66-77). The present bust is more Baroque in style however, with more prominently delineated hair with curls terminating in drilled holes, which would indicate a 17th century dating.