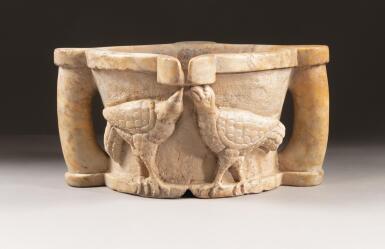 SOUTHERN ITALIAN, CIRCA 12TH CENTURY | MORTAR WITH AN EAGLE AND TWO DRINKING BIRDS

SOUTHERN ITALIAN, CIRCA 12TH CENTURY | MORTAR WITH AN EAGLE AND TWO DRINKING BIRDS

MORTAR WITH AN EAGLE AND TWO DRINKING BIRDS

Considering the age of the mortar, the condition is generally good, with dirt and wear to the surface consistent with age. There are minor abrasions and chips to the surface throughout. The marble has a natural yellowish hue. There is veining to the marble consistent with the material. This includes some more prominent dark veins around the upper rim of the mortar. There are small naturally occurring inclusions to the marble throughout. The head of the central spread eagle is reattached or possibly replaced, and there are further restorations in this area. There appears to be a series of restored fractures to the edge of the bowl on the right above the eagle. There are restorations to the neck and feet of the right bird on the other side in the pair of birds. The head of the left bird appears to be reattached and is possibly replaced. There is restoration also to the feet of the left bird and to the bottom edge of the mortar in this area. There is particular wear and residues to the interior of the mortar. There is particular veining to the underside, including some large open inclusions.

Decoration with birds, in particular eagles, is seen throughout Italian Romanesque sculpture. Compare the eagle on the present mortar, for example, with a Southern Italian 11th-century marble relief in the Cloisters Museum, New York (inv. no. 67.168). The eagle on the present object finds a strong parallel in two eagles, likewise with prominent feathers, on the late 11th-century Bishop's throne in the Duomo at Canosa (circa 1080-1089) (see Poeschke, op. cit., figs. 70 and 71). There is also a parallel with the interlaced animal decoration found on Venetian reliefs such as those which are recorded on the Fondaco dei Turchi in Venice by Ruskin in the 19th century (the building is now restored). Compare with the four decorative roundels described as Venetian, 12th-13th-century in the Cloisters (inv. nos. 09.152.9, .11, .12, .13). The ultimate source of such iconography in both the Southern Italian and Venetian examples can be found in Byzantine art. The present lot appears to have been conceived as a mortar, though it also finds precedents in Romanesque fonts and capitals due to its shape with enveloping decoration.