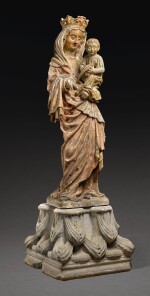 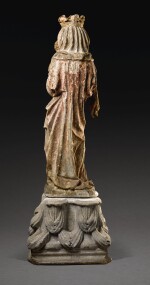 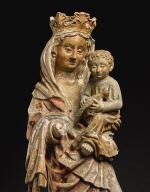 polychromed limestone, on an associated 14th-century limestone capital base

In consideration of the medieval age of the Virgin, the statue is in good condition with dirt and wear to the surface consistent with age. Both heads are reattached at the neck. The Virgin's proper right hand is lost. There are various relatively minor losses to the top of the finials of the crown. The Virgin's nose is restored. There are remnants of multiple old paint layers, particularly in the crevices of the drapery. Some of the polychromy such as at the Virgin's face may have been refreshed. There are some small old restorations, particularly around the bottom, including the tip of the Virgin's foot, where there is a joint. There are various relatively minor chips and abrasions throughout, but in particular to the high points. There are a few larger chips to some of the edges of the drapery.

The stone capital is a fragment and as such, there are various losses, particularly at the corners at the top, and also at the bottom edges. There are some further losses, including a large loss to one of the upper sides. There are some old glue and dirt residues. There is evidence of probably weathering to the surface.

This beautifully carved group of the Virgin and Child, with a slender and elegantly curved body, has the rounded facial features, almond-shaped eyes, and enigmatic smile that is apparent in many Virgins of the Lorraine-type dating to the 14th century. The seated Christ child, holding a bird, is also frequently seen in these statues, compare for example to a North-Eastern French Virgin, dated to the mid-14th century, sold at Sotheby's New York, 25 January 2001, lot 20.

One of the features that distinguishes the present Virgin is her slender shape and abundant drapery, with a shorter fold of drapery slung over her proper right arm, terminating just below the hip. In these details, it is different from the Lorraine Virgins which are of more square shape, with ample waists and heavy pleated folds. The drapery of the present lot compares best to two Virgins published by Schmoll gen. Eisenwerth (op. cit. nos. 336 and 337), which are catalogued as 'Lorraine under western influence' and dated 1370/1380. Virgins from Ile-de-France, such as one in the Louvre (inv. no. RF 1632), would have influenced the more elongated and slender appearance of the present Virgin.