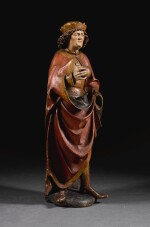 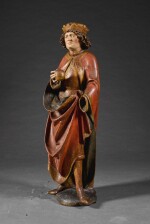 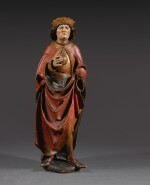 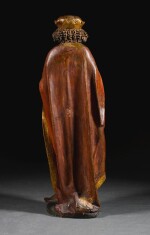 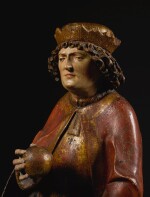 Overall the condition of the wood is good with minor dirt and wear to the surface consistent with age. The proper left hand is lost and there are some chips, and the proper right hand is reattached. The tips of the feet are reattached or carved separately. The front section of the drapery with blue lining is carved separately, and may be partially restored. There is some very minor stable splitting to the wood consistent with the material. There are some small losses, including to one of the points of the coronet, and to the edges of the remaining points. There is an original plug to the top of the head, and a small lacuna. Much of the original polychromy and gilding survives, however the paint has been refreshed, in particular at the face and to the red drapery. There is particular craquelure to the chest. There is an area of refreshed loss to the paint at the proper left shoulder. There is a knot in the wood at the back of the cloak, and an area of loss. There is a metal hook to the reverse of the sculpture. There is a metal pin to the shoulders. There are some flecks of paint to the ground. There is also a small hole to the ground.

With Wilhelm Henrich, Frankfurt am Main, 1957;

private collection, Germany, acquired from the above;

thence by descent to the present owners

The identity of this charismatic figure as a King is suggested by his attributes of a crown and the orb, formerly surmounted by a cross. While the loss of his second attribute – perhaps a sceptre – does not allow for a more precise identification, it is likely that a saintly King, such as St Oswald or St Henry II, is represented here. Traditionally thought to have been made in the Tyrol, the figure finds a striking comparison in a Saint Nicholas dating to circa 1470 from St Georgen am Pinzgau, which neighbours this Austrian region (Legner, op. cit., fig. 160a). Compare the shortness of the body, the drapery scheme with a large, 'auricular' fold across the lower body, and the broad face with small eyes, a slightly pouting mouth, and finely carved texturing suggesting age. A similar mode of representation in the face is seen in the figure of Saint Wolfgang from the great altarpiece at St Wolfgang im Salzkammergut by Michael Pacher, perhaps the most influential Tyrolean sculptor in the second half of the 15th century (see Müller, op. cit., fig. 21).