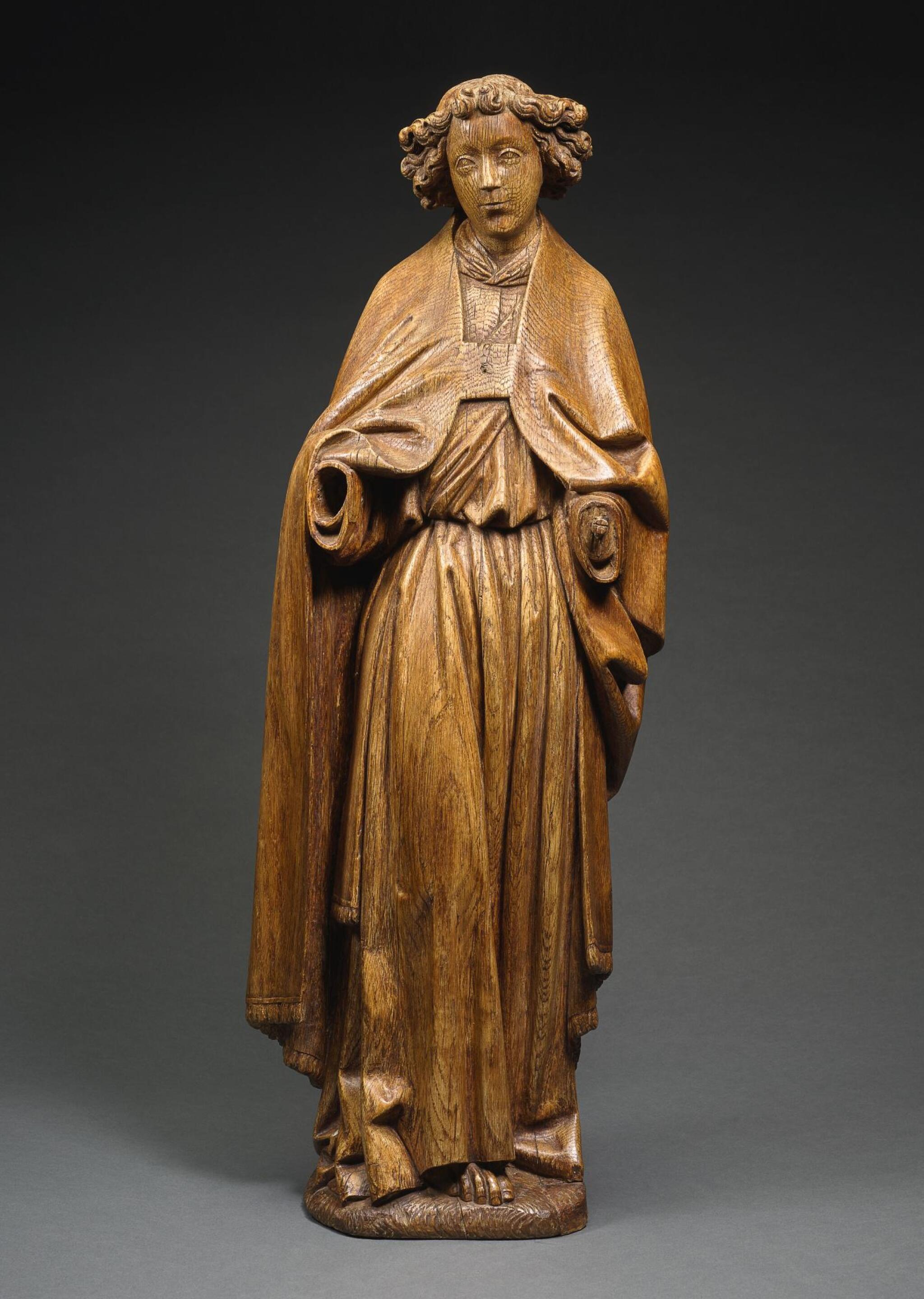 ANGEL OF THE ANNUNCIATION

with the Brussels mallet mark to the underside

Both of the figure's forearms and the wings are lost. Otherwise the condition of the wood is good, with minor dirt and wear to the surface consistent with age. There is a small hole at the centre of the cloak which would have held a now-lost clasp. There appears to be a joint around the nose. The cavities for the wings at the back have been filled with wood and another filling material. There is a wood dowel emerging from the remnant of the proper left arm. A small section of the base at the front is replaced. There are some losses to the base on the proper left side and at the back. There is minor stable splitting to the wood, consistent with the material, in particular to the hair on the proper left side, the cloak running over the chest, and at the bottom. There are remnants of blue and red polychromy at the back. There is a small hole to the proper right sleeve. There are two small holes and one larger hole to the underside.

This serene figure of an Angel forms an exciting new addition to the oeuvre of Jan Borman I, the founder of the celebrated Brabant dynasty of sculptors that is currently the subject of a major exhibition at the M Museum in Leuven.

Recent research has brought to light a group of works attributable to Jan Borman I, whose oeuvre had previously been obscured by the scholarship in favour of his son, Jan Borman II, the hitherto presumed author of the magnificent Saint George Altarpiece in the Art & History Museum in Brussels. Initially active in Leuven before moving his workshop to Brussels, Jan Borman I has now been identified as the highly accomplished sculptor responsible for masterpieces such as the funerary monument of Isabella of Bourbon (1476-1478), the Arenberg Lamentation (circa 1460-1470) and - probably together with his son - the Saint George Altarpiece of 1493.

It is the Arenberg Lamentation, housed in the Detroit Institute of Arts (inv. no. 61.164), which has provided the key to several attributions of individual works to Jan I from his earlier activity. The present Angel - probably from an Annunciation group - is strikingly similar to a pair of candle-bearing Angels in the Detroit Institute of Arts (inv. nos. 25.18-19), which have newly been attributed to Jan I. Compare the angular composition, facial features with heavy-lidded, almond-shaped eyes, straight noses and small mouths, and the long, tubular folds of the drapery. A particularly convincing parallel is found in the weightlessly suspended, abundant curls of hair, which also appear in the figure of Saint John from the Arenberg Lamentation, as well as an Angel formerly in the Baron de Decker collection and the Six Angels from a Calvary in the Museum Mayer van den Bergh in Antwerp (op. cit., fig. 45), all now given to Jan Borman I. These comparisons allow for a dating of the present Angel around 1480, while its origin in Brussels is indicated by the mallet mark on its underside.

In the light of the renewed assessment of Jan I as the foremost sculptor of the Borman family, the sale of the present Angel represents a rare opportunity to acquire a work attributed to this iconic Gothic master carver.

The Angel is the subject of an expertise by Dr Michel Lefftz, which is available upon request.