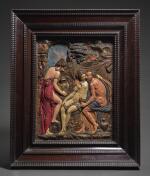 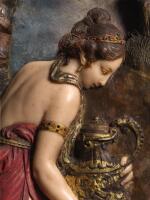 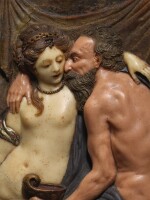 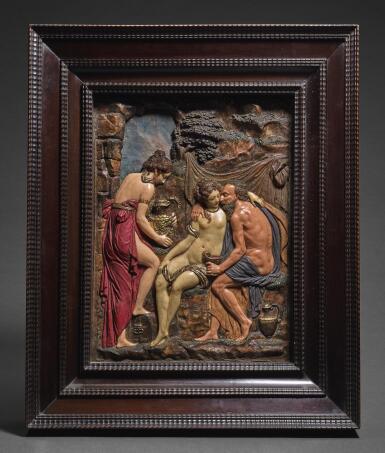 ATTRIBUTED TO DANIEL NEUBERGER THE YOUNGER (1621-1680), GERMAN, AUGSBURG, MID-17TH CENTURY | RELIEF WITH LOT AND HIS DAUGHTERS

ATTRIBUTED TO DANIEL NEUBERGER THE YOUNGER (1621-1680), GERMAN, AUGSBURG, MID-17TH CENTURY | RELIEF WITH LOT AND HIS DAUGHTERS

RELIEF WITH LOT AND HIS DAUGHTERS

Considering the age and fragility of the material, the wax is in very good condition overall, with minor dirt and wear to the surface consistent with age. There are a few minor stable fissures, consistent with the material, notably one running through the centre of the relief, the seated female nude's proper right arm and abdomen, and along the male figure's proper right leg. There also appears to be a reinforced fissure to the chest below the left-hand figure's proper right foot . There is some pitting to the wax, in particular to the flesh of the seated female nude, and - more minor - to the flesh tones of the other two figures. The flesh tone of the seated female nude is paler than that of the other figures, which could possibly be the result of discolouration. There is some wear to the gilding and polychromy, in particular at the high points, such as the standing female figure's earring and a bunch of her drapery. There are a few small losses to the beads of the women's headdresses and jewellery. The red, ochre and blue paint have a slightly coarse appearance; it is possible that they may have been refreshed in history.

The frame is in good condition with some wear consistent with age, including nicks and scratches. There is minor evidence of non-active worming. There is a small loss to the top edge of the bottom section. There is an opening at the top to facilitate insertion of a now-lost sliding shutter. There is stable splitting to the wood at the back, consistent with the material, with some reinforcement. There is an iron mount at the back for hanging.

Because of the fragility of the material, major sculptural works in wax from the Renaissance and Baroque periods survive in exceedingly small numbers. It is remarkable, therefore, that this unusually large and beautifully modelled relief may be added to the small extant oeuvre of the celebrated 17th-century wax sculptor, Daniel Neuberger.

A biblical subject with erotic potential, Lot and his Daughters proved popular among Counter-Reformation artists, who sought pretexts to depict their collectors’ desired female nudity within acceptable bounds. As recounted in Genesis, Lot, having escaped from Sodom and newly widowed, took refuge in a cave with his two daughters. Believing that they were the last human beings left on earth, the young women proceeded to intoxicate their father and to lie with him, producing each a son. The present relief’s frame would have once included an integral sliding shutter, which would have added to the thrill of beholding such risque content.

The present composition reappears in three stone reliefs; a marble in the Staatliche Museen, Berlin, and two near-identical alabasters in Schloss Löwenburg, Kassel and in the Herzog Anton Ulrich-Museum, Braunschweig. Most recently it has been argued (Lipinska, op. cit.) that these are the work of the same sculptor, probably of Southern Netherlandish origin but active in Germany in the middle of the 16th century. It is presumed that the composition is dependent from an unknown, probably Netherlandish, graphic model; though, interestingly, the motif of the woman holding an amphora is also seen in the famous water nymph reliefs on the Fontaine des Innocents by Jean Goujon of circa 1550. A fourth work showing the same arrangement is a bronze relief in the Kunsthistorisches Museum, Vienna, which corresponds to the present wax in almost all its details, including the rocky background, which differs from the burning city depicted in the stone reliefs. The Vienna relief is documented to have been cast by Balthasar Heroldt the Elder for the Imperial Kunstkammer in or before 1657 and, given its correspondence in size to the Berlin relief, it and the wax are likely to have been copied from it, with small variations in the background and some details, such as the drapery around the seated daughter’s legs. It is plausible that the presumed author of the present wax - Daniel Neuberger - could have seen the Berlin relief, which was then almost certainly in the possession of Frederick William, Elector of Brandenburg, and provided the model for Heroldt’s cast.

Born into an Augsburg family of wax modellers, Daniel Neuberger the Younger rose to significant prominence as an artist in mid-17th century Germany, receiving commissions from clients as eminent as Emperor Ferdinand III. Neuberger was renowned among his contemporaries not only for his intricate battle scenes - of which two survive in the Kunsthistorisches Museum, Vienna - but also for his talent in imitating other materials in his richly coloured waxes. The latter skill is showcased beautifully in the present relief, which renders the women's precious jewellery, as well as the metal of the amphora, to astonishing effect. A convincing stylistic parallel for the present work is found in Neuberger's wax relief with Susannah and the Elders preserved in the Wallace Collection, London (inv. no. S460), which displays the same technique. Note also the appearance of the right hand man in the Wallace relief, analogous to the Lot figure with his distinctive aquiline nose, beard and textured skin, which forms a contrast to the pale softness of the female nude in both reliefs.