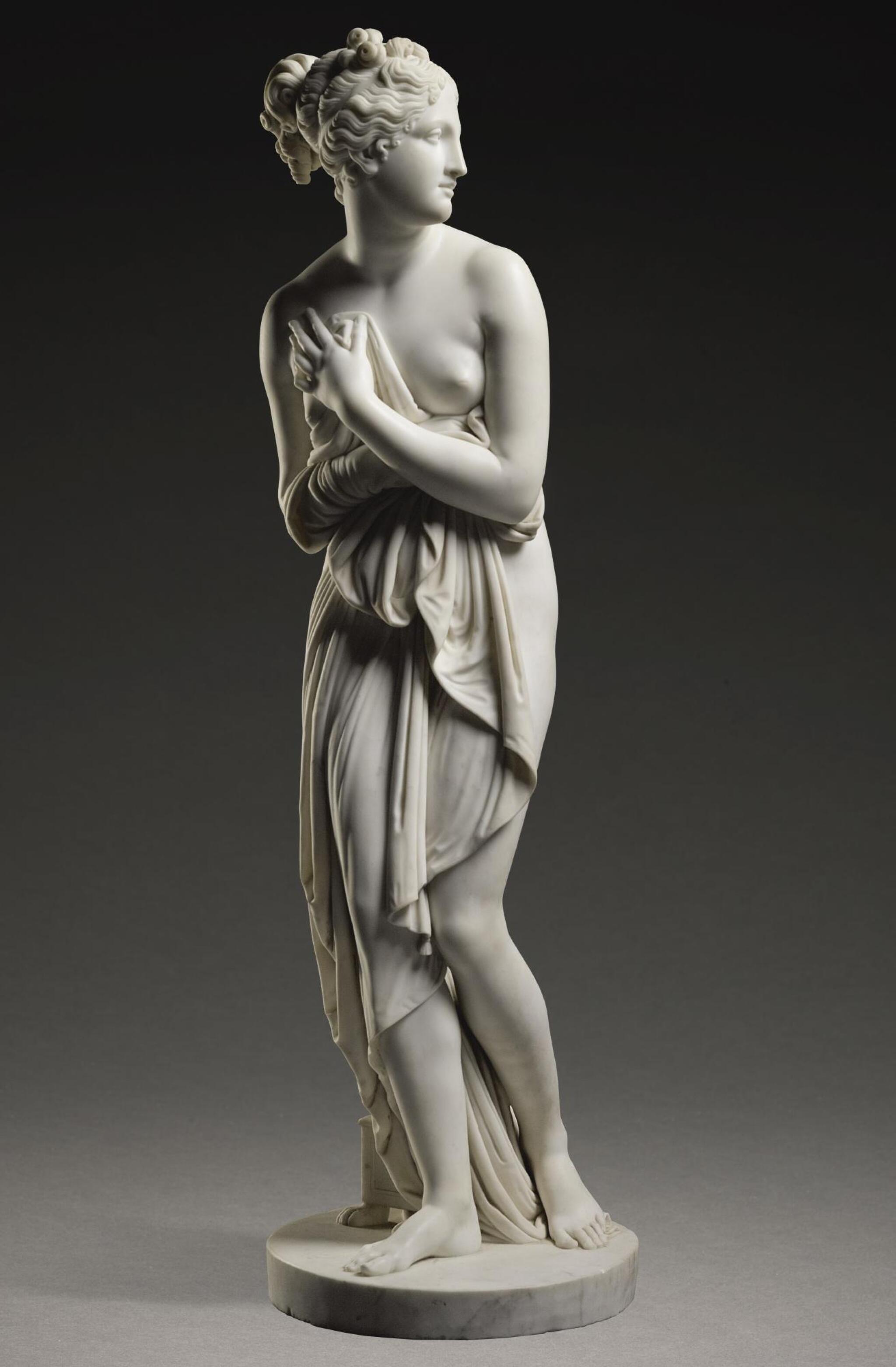 Overall the condition of the marble is very good, with minor dirt and wear to the surface consistent with age. There is natural veining to the marble consistent with the material, in particular at the back of the neck, upper back, and chest and arm on the proper left side. There are a few very minor chips and abrasions to the lower edges of the group. There are a few further chips and abrasions, including some scratches at the buttocks and the proper left calf. There is a small chip to the side of the casket. There are a few splashes of paint and dirt, including to the drapery towards the bottom. There is an apparent loss to one of the curls at the back of the hair on the proper right side.

When the Medici Venus was forcibly removed from the Tribuna of the Uffizi by Napoleon's forces, King Louis I of Etruria commissioned Antonio Canova to replace the figure. True to nature, Canova submitted a wholly original figure to rival the antiquity, despite originally being asked to sculpt a copy. Canova's Venus references the Medici Venus in the turn of the neck, but leans slightly forward, adding greater finesse to the proportioning of the figure. The Neoclassical composition also incorporates drapery which is used by Venus to conceal her nudity. This is a distinctly modern gesture, which imbues the figure with a sensuality also seen in seminal contemporary paintings such as Ingres' Valpinçon Bather and Hayez' Venus. The Venus Italica became an instant success when it was unveiled in the Palazzo Pitti in 1812. Canova subsequently made a number of versions, including examples for the Marquess of Lansdowne, the Marquess of Londonderry and, ironically, for Napoleon’s brother Lucien.

Canova had a number of highly skilled studio assistants who produced reductions of his sculptures both during his lifetime and after his death. Hugh Honour has noted that Adamo Tadolini, one of Canova's most important assistants, produced versions of the Venus Italica. Given that the present marble is of particularly high quality and follows the original model closely, it is likely that it was produced shortly after Canova's death and probably by one of the artist's assistants. Rome in the first three decades of the 19th century was filled with marble carvers of the first rate, many of whom worked under Canova and particularly Bertel Thorvaldsen, whose marbles after circa 1815 were carved by assistants almost without exception. The present marble has a particularly beautifully polished original surface. Note the finely delineated fingers and the perfection of the facial features. These qualities put it on the same level in terms of quality as productions by both Canova's and Thorvaldsen's disciples active in this period.