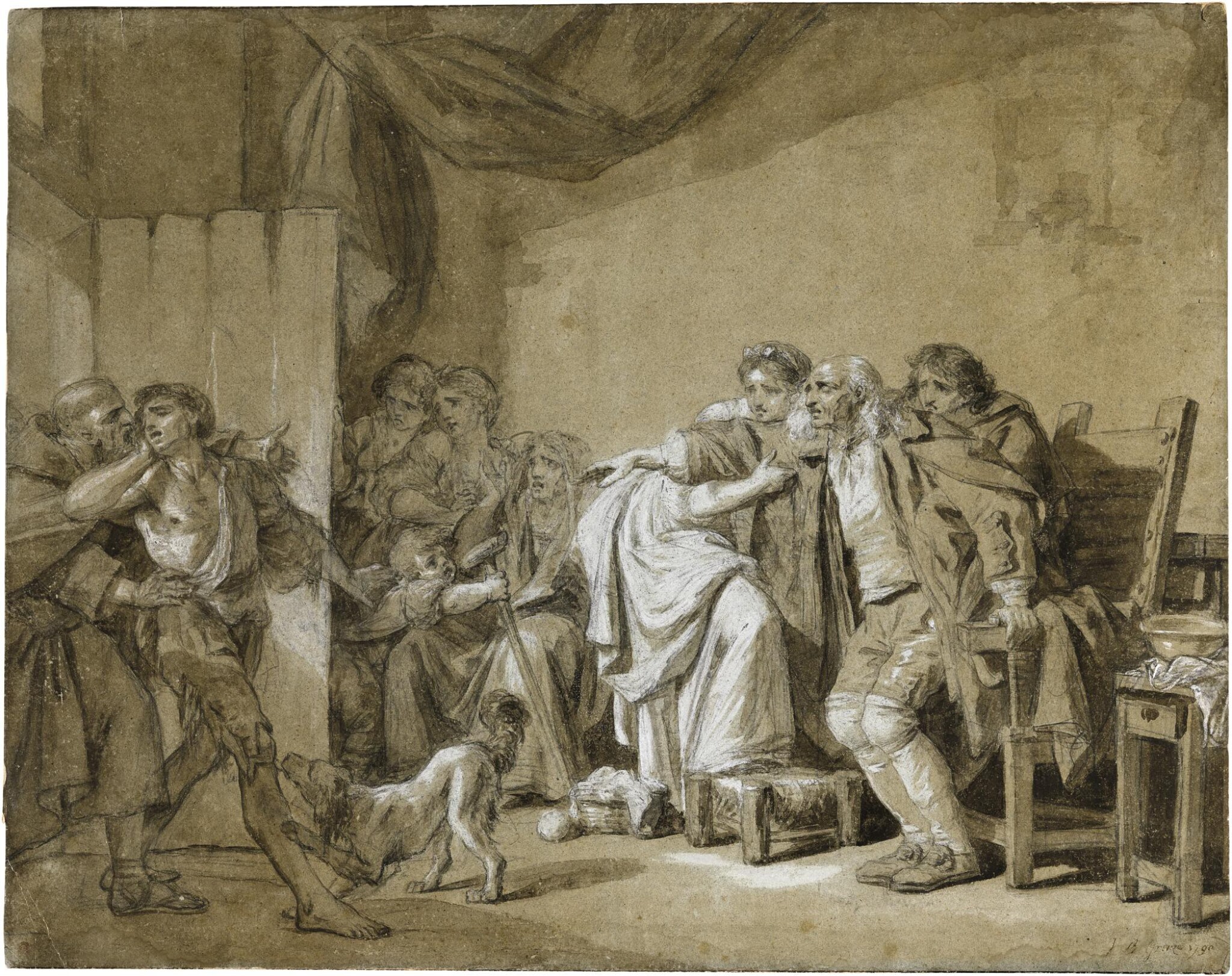 THE RETURN OF THE PRODIGAL SON

Point of the brush and brown wash and black chalk, heightened with white, on blue-green paper;

Laid down on a card backing and subsequently hinged to a modern mount. There is some slight water staining to both the upper and lower edges. There is an old tear to the upper right corner and a small diagonal crease to the lower left corner. There are minor areas of abrasion and some light foxing. The sheet retains much of its original blue color and remains in good condition given its large size. There is some minor oxidisation to parts of the white heightening, however the combination of media remains in otherwise good condition throughout.

This unusually large and highly characteristic sheet by Jean-Baptiste Greuze is devoted to one of the artist’s preferred themes: the family disgrace, a subject that the artist explored to great acclaim throughout his career, in particular through his two majestic paintings, collectively known as The Father's Curse,1 which date to 1777-78. Though the present sheet postdates these two works by over a decade, the theme of the Prodigal Son was one that clearly preoccupied

Greuze’s brush drawings in the medium of brown and/or gray wash, black chalk and, as here, the abundant use of white heightening, include some of the liveliest images in eighteenth century French drawing. Whilst many of his works of this type depict simple genre scenes, some, like the present lot, are considerably more ambitious in scale, focusing on a more profound, moralizing subject matter. Indeed, within a period of about fifteen years, beginning in 1775, Greuze created some of his most ambitious and famous pictures, all peinture morale or as Edgar Munhall described them, “moralizing genre paintings.”4

While no painting of this distinctive and dramatic composition appears to survive, there is a fascinating record of the evolution of the work, through the survival of another, significantly smaller drawing by Greuze, previously in the collection of Ian Woodner,5 in which the artist can still be seen exploring the positioning of certain figures, such as the dog and the Franciscan monk. Unlike other portrayals of The Return of the Prodigal Son, Greuze has not depicted the moment of embrace between father and son, as they are reunited following the son’s squanderous adventures. Instead he has chosen to heighten the drama of the son’s unexpected return, by including numerous additional figures within an intimate domestic setting, whose facial expressions and poses intensify the existing drama between father and son.

The Return of the Prodigal Son is set in a sparsely decorated room, closely comparable to that depicted in Greuze’s drawing for The Father’s Curse: The Ungrateful Son. As the door is thrust open on the left of the composition, shedding a powerful shaft of natural light across an otherwise shadowy room, the prodigal son, wearing nothing more than the remains of a white shirt and torn trousers, stumbles barefoot into his father’s home, accompanied and encouraged by a Franciscan monk. His elderly father, frail with old age, gestures with incredulity towards the door, his eyes barely able to register the scene he is witnessing. On either side of the old man stand a young man and a woman, who both prop up their senior, as he tentatively rises to his feet. Between the two main protagonists Greuze has included what we must assume to be other members of the family, including a seated old woman and two standing young women, who both stare tentatively around the door at the unexpected home-comer. Two of the most delightful figures in the composition are the young boy and the dog, whose contrasting reactions to the return of the prodigal son create a charming juxtaposition. While the young boy turns away from the door, moving anxiously to pass the old man (possibly his Grandfather?) his walking stick, the dog, in contrast, approaches the prodigal son and, most significantly, becomes the first member of the household to make physical contact with him, as he tentatively touches him with an outstretched paw.

From a technical perspective this drawing, signed and dated by the artist, is one of the most imposing works on paper by the artist to have appeared on the open market within at least the last thirty years. It is also highly rare as a large scale compositional work, with only two other drawings of comparable importance, a study for L'accordée du village6 and La bénédiction paternelle,7 having appeared on the open market since 2005.