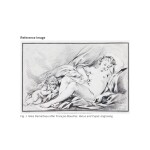 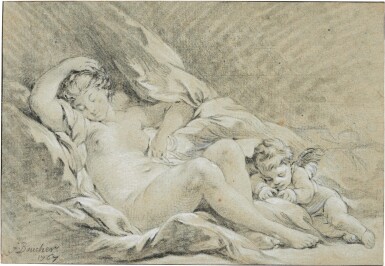 Laid down on paper and hinge mounted. There is a small loss to the lower left corner which has been made up and a small light brown stain to Venus' right leg. The blue paper has faded somewhat however the chalk medium remains reasonably fresh throughout, with the image strong. Sold in an elaborate, decorative case.

The present work, signed and dated by the artist, corresponds precisely, in reverse, to a print executed by Gilles Demarteau after Boucher (Fig.1), allowing us to say with some certainty that the drawing was made by Boucher in preparation for the print.

The composition was evidently one that Boucher found particularly satisfactory, as he also executed a painting, entitled Vénus couchée et endormie,1 now in the North Carolina Museum of Art, Raleigh, in which the reclining figure of Venus is once again employed in an near identical pose, though the sleeping Cupid found in the present drawing and the Demarteau print is notably absent, replaced instead by two putti.

The final comparable work to the present lot is a drawing in the collection of the Musée des Beaux-Arts, Besançon,2 in which Boucher once again portrays the reclining Venus, though in this instance the artist has chosen not to include Cupid, or indeed any putti.

Executed very late in his long and illustrious career, this drawing is clear evidence, if any were needed, that Boucher never lost his touch as a draughtsman.

We are grateful to Alastair Laing who has kindly confirmed the attribution to Boucher.