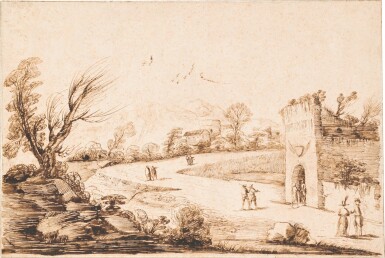 GIOVANNI FRANCESCO BARBIERI, CALLED GUERCINO | AN EXTENSIVE LANDSCAPE WITH A WINDING ROAD, SEVERAL FIGURES AND AN ELEGANT COUPLE IN THE FOREGROUND

GIOVANNI FRANCESCO BARBIERI, CALLED GUERCINO | AN EXTENSIVE LANDSCAPE WITH A WINDING ROAD, SEVERAL FIGURES AND AN ELEGANT COUPLE IN THE FOREGROUND

AN EXTENSIVE LANDSCAPE WITH A WINDING ROAD, SEVERAL FIGURES AND AN ELEGANT COUPLE IN THE FOREGROUND

Laid down on an old mount. Foxing scattered. Some abrasion and very small losses, due to the ink, in the foreground in the darker areas.

This handsome, large landscape, in which the gate of a town animated by figures and a winding road possibly flanking a river are set against a mountainous background, exemplifies perfectly Guercino's talent in creating this type of elaborate imaginary view. He seems to have made these highly finished drawings entirely for their own sake, as they never relate to any paintings or prints. Inventing numerous different scenes of this type, which in many ways parallel paintings more than drawings in terms of their function and composition, requires a totally different imaginative process from the one underpinning the experimental genesis of Guercino's figure studies.

Guercino was surely very busy with his numerous commissions, and as Denis Mahon and Nicholas Turner observed, his 'dedication to what might be considered a merely peripheral activity bespeaks Guercino's devotion to what he himself must have considered of some importance.'1

In the present sheet the artist has skillfully drawn a fully finished view, employing his favorite media for such studies, namely pen and brown ink. With strong, beautifully orchestrated contrasts, Guercino has emphasized the darker foreground to offset the wide space of the winding road, which together with the gate diversifies the space, giving the artist the opportunity to animate the whole composition with figures. The elegantly dressed couple with their plumed hats, seen conversing in the foreground, is a delightful touch.

These grand landscape drawings are difficult to date. One possible clue is, though, provided by a sheet in the Royal Collection at Windsor Castle, the Landscape with a winding road leading up to the gate of a town, which is similar to the present work in terms of the approach to composition, and to light and shade.2 That drawing bears a dating of 1635 on the verso. The use of pen and ink in the present sheet is, though, a little more controlled, and not far from the Landscape with cliffs rising above the sea, a fortress on the hilltop to the right, formerly in the collection of Sir Denis Mahon and now in the Ashmolean Museum.3

As rightly stressed by Mahon and Turner, ‘Behind the artist’s inspiration lay a lifelong attachment to the countryside.’4

1. D. Mahon and N. Turner, The Drawings of Guercino in the Collection of Her Majesty the Queen at Windsor Castle, Cambridge 1989, p. 101