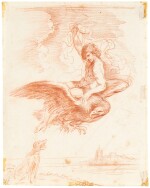 GIOVANNI FRANCESCO BARBIERI, CALLED GUERCINO | GANYMEDE TAKEN AWAY ON THE BACK OF AN EAGLE, A DOG TO THE LEFT AND DISTANT BUILDINGS TO THE RIGHT

GIOVANNI FRANCESCO BARBIERI, CALLED GUERCINO | GANYMEDE TAKEN AWAY ON THE BACK OF AN EAGLE, A DOG TO THE LEFT AND DISTANT BUILDINGS TO THE RIGHT

GANYMEDE TAKEN AWAY ON THE BACK OF AN EAGLE, A DOG TO THE LEFT AND DISTANT BUILDINGS TO THE RIGHT

Hinge mounted in two places along the upper edge to a modern mount. There are six stains located to the extremities of the sheet created by old adhesive tabs attached to the verso, they do not however affect any of the areas of red chalk. There are some other slight areas of foxing to the sheet and a small pin prick hole to the lower centre. There are some small nicks to the centre of the lower edge. The red chalk media remains in fine condition throughout with the image strong. Sold unframed.

his sale, London, Sotheby's, 9th December 1953, lot 53 ('Ganymede seated on the back of an eagle in flight; below, a hound to the left a distant building to the right');

The subject of this handsome drawing, the Frigian youth, Ganymede, taken up to heaven by Jupiter in the shape of an eagle, seems to have been painted by Guercino only once in his career, in his decorations for the Villa Giovannina, Cento. As noted by Nicholas Turner, the name of the villa, a former castle, derived from that of its 15th-century owner Giovanni Bentivoglio (1443-1508). From the mid-16th century, the castle became the country mansion of the aristocratic Aldovrandi family from Bologna, who undertook some renovations necessitated by the building's new domestic use.1

Count Filippo Maria Aldovrandi (1598-1644), Guercino’s patron and benefactor, continued to embellish the villa with a series of decorative friezes in eight rooms on the first floor (of which only six are now extant), and entrusted the work to Guercino, although the life of the artist written by the biographer Carlo Cesare Malvasia (1616-1693) only mentions a single Venus and Cupid in relation to this commission.2

Dating the cycle is not straightforward, as the condition of the paintings deteriorated in the 18th century, and they were subsequently heavily restored. Though often dated to circa 1617, Nicholas Turner believes the project should instead be placed in the early 1630s, a dating in keeping with the style of the present sheet.3

Turner has also noted that Gaetano Atti, in his 1861 publication on the life and work of Guercino4, describes as part of the decoration six small painted scenes (now lost), among them 'An Eagle with a Boy on its back', the subject of the present drawing.

There are two further drawings by Guercino which relate to this same subject, the first being very close to the present sheet, though in reverse, and executed in pen and ink. This was formerly in the collection of Giuseppe Vallardi, and was sold in London in 1987. The second sheet, which focuses only on the figures of Ganymede and Jupiter, originated from the Collection of Marcello Durazzo, and is now in the collection of Palazzo Rosso, in Genoa.5

Our sheet, which was formerly in the Reitlinger collection (see Provenance), includes, like the drawing formerly in the Vallardi collection, the dog seated on a cliff in the foreground, here to the left, with a view of a fortified city to the right. Turner believes that these three drawings date from the same period, in the early 1630s, and that the present sheet represents an early stage in the evolution of the frescoed composition, writing: ’The ex-London art market drawing, formerly in the Reitlinger collection, was apparently drawn at an earlier stage in the composition’s evolution…’.5