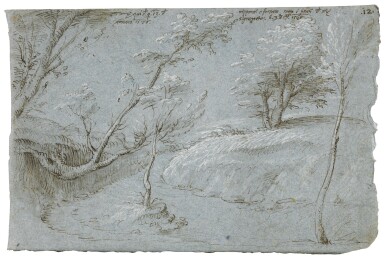 A ROCKY LANDSCAPE WITH TREES

Pen and brown ink and wash, heightened with white, on blue paper;

Hinge mounted to a modern cream mount. The edges of the sheet are somewhat uneven and there is some surface dirt to the extremities. There is a small pin prick hole to the lower right and left corners. The work remains in fundamentally good condition with the blue paper retaining much of its original color. Sold unframed.

This delightful sheet, evidently once part of a sketchbook, is a highly characteristic example of Gherardo Cibo's drawings from nature. Further sheets, plausibly from the same sketchbook and similar in size and style to the present work, were sold in these rooms in 2015.1

Cibo's drawings were previously attributed to a variety of northern artists, with Arnold Nesselrath the first to establish the artist's true identity, which was most probably lost by his drastic decision - when only twenty-eight years old - to abandon the papal city and his promising ecclesiastical career, for a secluded life in the Marches.2 He was from a highly influential aristocratic Genoese family and had received his education in Bologna and Rome. For sixty years he lived mostly in the small city of Rocca Contrada (today Arcevia), where his mother Bianca Maria Vigeri della Rovere resided.

Cibo was a botanist and a scientist, knowledgeable in medicine, a literary figure, a musician and, of course, a talented draughtsman. His poetic views encapsulate the beauty of the countryside and of the mountainous areas in the Marches and are often accompanied by inscriptions that give us, as here, an insight regarding the moment the drawing was made and the place depicted, adding a delightful, autobiographical quality.

Cibo could, as Lucia Tongiorgi Tomasi wrote '...be considered as the very embodiment of that fascinating Renaissance ideal - the "artist-scientist-dilettante."3