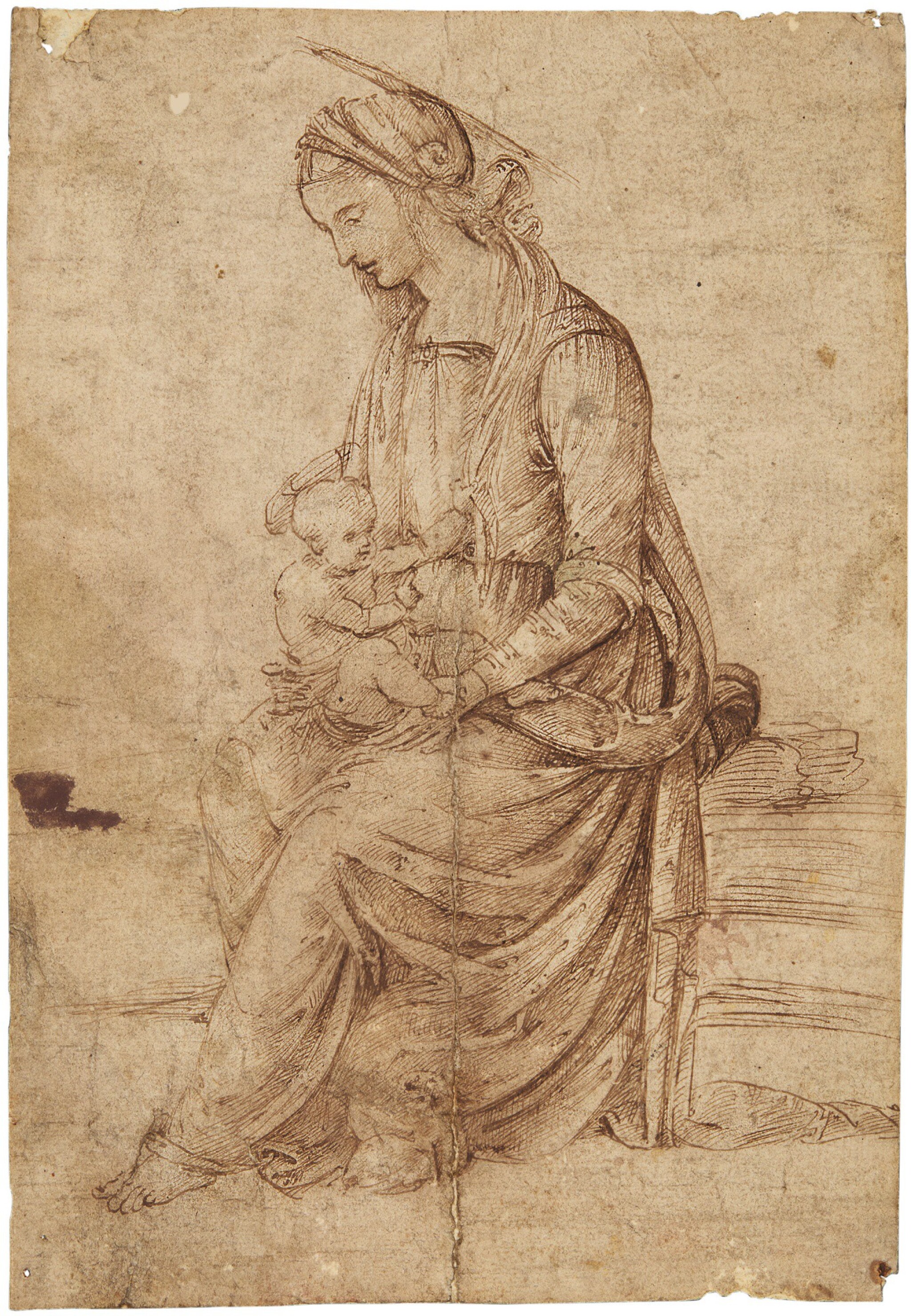 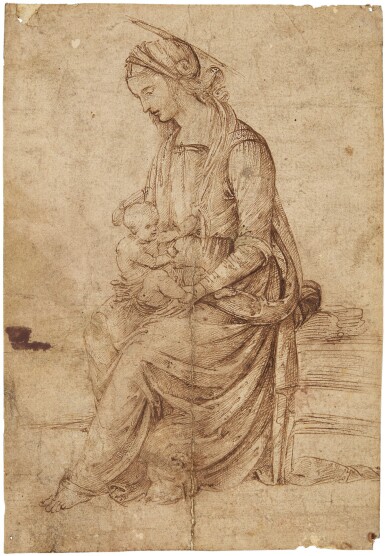 bears old inventory number in pen and brown ink on the backing sheet: M98 and in red chalk the attribution: P. Perugino

Laid down on an old backing. A tear running from the height of the left leg of the Child to the lower margin. This seems caused by a defect of the paper which runs from the top or it was caused by a ridge on the paper when the primary sheet was glued to the backing. There are other small areas were the paper has wrinkled. Another very small tear on the bottom margin to the left. There are small nicks and small losses at the top and bottom margins. The drawing appears to have been pinned on the wall at some point as there is a clear small rust stain bottom right and small pin holes at the corners. A very small loss top left. A dark brown stain to the left margin and a few very small and light stains scattered. Some surface dirt. The paper has somewhat slightly darkened though the pen and ink has retained strength and vigor.

Please note that this drawing is sold unframed. The frame is kindly loaned by Gino Franchi and is available for purchase separately. Please contact the Old Master Drawings department for further details.

thence by descent to the present owner

Previously unknown to scholars, this substantial and generally very well preserved study of the seated Madonna with the Christ Child on her lap is an immensely important addition to the extremely small number of surviving drawings by the early Umbrian master, Bernardino di Betto, called Pintoricchio, whose work had such an important influence on the young Raphael.

Drawn in profile and beautifully centered on the page, the figure of the Madonna encapsulates Pintoricchio’s ideal of female beauty, in which a feeling of serene religiosity plays such a central part. The artist’s subtle execution focuses especially on the elaborate observation of the Madonna’s draped garments, which suggest so effectively the body that lies beneath. The figure is animated by these deep and structured folds of drapery, almost architectural in their conception. The Madonna holds on her lap the Infant Christ, who turns to the right in the act of blessing, while grabbing the edge of her veil with his left hand.  The meditative and devotional mood of the drawing is enhanced by the absorbed gaze of the Madonna who focusses, motionless, on the Christ Child. The space around the figures is indicated by a few rapidly described stones to the left and wooden planks to the right. Keeping in mind the position of the Madonna and the blessing Child, in both cases not frontal, it is most likely that Pintoricchio executed this sheet in preparation for a lost painting of The Adoration of the Magi, in which the Christ Child would probably have been blessing a kneeling donor. Marian devotional imagery of this type was extremely popular in the fifteenth century, in paintings made both for public and for private settings.

Drawing solely in pen and brown ink, with precision and vitality, Pinturicchio here has defined his shadows mainly with hatched parallel strokes, alternating with very fine and delicate cross-hatching. Most of the lines display the characteristic Umbrian hooked ends, known as ‘occhiellature’, a technique frequently used by Perugino and by the young Raphael. Here and there, Pintoricchio has emphasized some of the contours by strengthening the lines, heightening the contrast between these outlines and the delicate handling of the rest of the sheet. The profile of the face of the Madonna has been reinforced by the artist with a continuous line that starts from her forehead and finishes at the jewelled rim of her dress. The light falls from the left, casting shadows over a variety of deep folds and creating areas of relative darkness towards the right of the sheet, achieving a sculpted and strongly three-dimensional overall effect.

The way in which the Madonna is presented in this sensitive study is clearly much influenced by the female figures of Perugino, and the old red chalk attribution to that artist, casually written on the verso, is not at all surprising. Drawings by Pintoricchio are extremely rare. Fewer than a dozen are known, hardly any of them linked with painted works by the artist1, and there has therefore been some confusion in the past between the graphic work of Pintoricchio and that of his famous older compatriot, Perugino (circa 1450 – 1523), whose graphic style was very influential for his younger assistant. The collaboration between the two artists began in the 1470s and continued well into the 1480s, when Pintoricchio assisted Perugino in painting the frescoes of the Sistine Chapel. Claudia La Malfa, in the catalogue of the 2008 exhibition devoted to Pinturicchio, has better clarified his role as a draughtsman in the ‘cantiere della Cappella Sistina’.2 Pintoricchio was not just an assistant in the execution of Perugino’s frescoes, but also provided his own drawings for some of the figures.  Unfortunately, the artist’s participation in this major work is not officially documented, and the well-known contract for the decoration of the chapel, dating from 27 October 1481, is signed by only four artists: Sandro Botticelli, Domenico Ghirlandaio, Cosimo Rosselli and Pietro Perugino.

All the same, the intimacy which is especially characteristic of Perugino’s female figures of this period is closely reflected in the elegant and elaborate aesthetic of the present drawing.

One factor making it difficult to distinguish between the graphic style of the two personalities is, as La Malfa has noted, their very similar working method and techniques: ’Anche il catalogo dei disegni di Perugino ...., si distingue per la varietà di tecniche e di applicazioni, che include disegni eseguiti a punta metallica su carta preparata con rialzi di biacca......a penna,.....e a carboncino...In questo dunque il processo creativo grafico di Perugino e Pintoricchio è simile e rivela una vicinanza tra i due artisti. Una vicinanza che si manifesta anche nel riuso dello stesso modello sia da parte dell’artista sia da parte dei membri della bottega per lavori firmati dai maestri.’ ('Also in the catalogue of Perugino's drawings ..., a variety of technique is evident, including drawings executed in metal point on prepared paper, heightened with white ....in pen, and charcoal… In this respect the graphic process of Perugino and Pintoricchio is similar and shows a close relation between the two artists. A relation that it is also clear in the reuse of the same models both in the bottega and for works signed by the master.').3 A major difference, though, is that while Perugino often drew the human figure from life, Pintoricchio seems to have preferred to use mannequins, perpetuating a long-standing Umbrian tradition.  In the present drawing, although the characterization of the Madonna’s face is strongly evident in her gaze, the parallel lines covering the surface suggest no volumes or variations of the type one would expect to find in a drawing made from a live model. More emphasis is put on the elaborately arranged veil, accentuated by the hair gathered beneath, which frames the elegant profile and the neck.

Pintoricchio was a master capable of impeccable devotional images like this, rendered with great technical accomplishment, which must have been extremely popular and appreciated in their own time. Perhaps he felt no need to make his serenely appealing Madonna more realistic, although the rapidly executed figure of the blessing Christ Child on her knee is far more spirited.

Drawings by Pintoricchio are extremely rare, and have hardly ever come to the market. The works that constitute the very small corpus of the artist’s known drawings are close to the graphic style of Perugino, and to that of the young Raphael, whose debt to the Umbrian master is evident in his very early career.

We are grateful to Claudia La Malfa, who has seen the drawing in the original, for confirming the attribution to Pintoricchio and for suggesting a date around 1500.