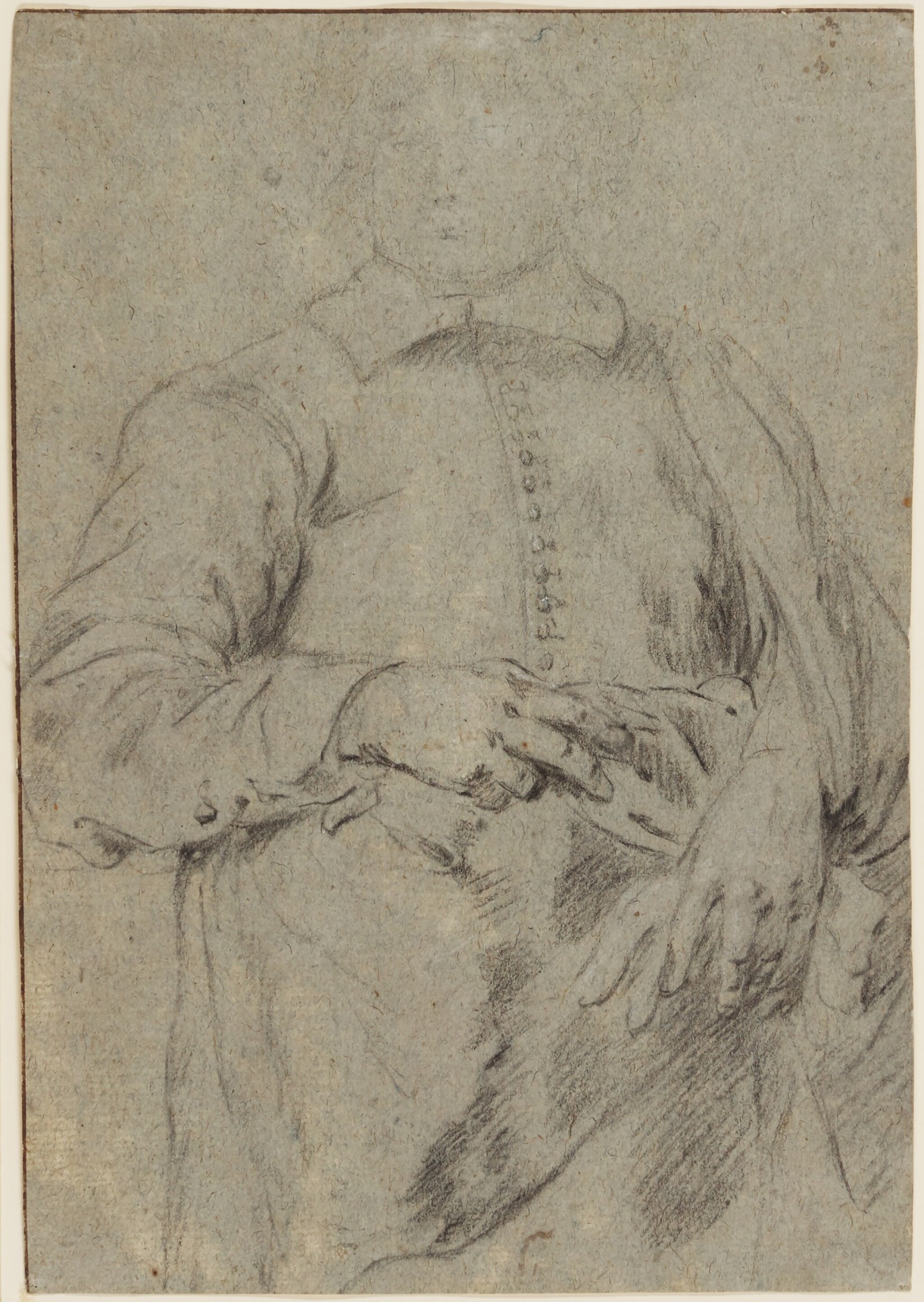 Study for a Portrait of a Standing Man

Attached at four corners to the mount. There is some light staining at the four corners and there are small areas across the sheet where the surface of the paper appears to have been rubbed/abraded. Chalk remains relatively strong.

In this characterful figure study, the artist concentrates on the positioning of the sitter's hands – one resting on the sash, the other holding a glove – and has only indicated the figure's face in the most cursory manner. Although the drawing does not appear to have been directly used as a preparatory study for any surviving painting, the overall pose is similar to that seen in a portrait of an unknown man by Van Dyck, and the positioning of the sitter's right hand is also very close to another painted portrait, also of an unknown sitter, in the Ca' d'Oro, Venice.1

Both of those paintings date from Van Dyck's Genoa period, c.1627-28, but as Dr Christopher Brown has pointed out, the rapid, confident construction of the hands and the swiftly hatched shading seen here are much more typical of the artist's drawings dating from the next phase of his career, the second Antwerp period, 1628-32. Perhaps the closest comparison of all in terms of technique is with the study for the Lamentation, in the British Museum,2 and in the realm of portrait drawings, there are also many similarities with the important study in the Pierpont Morgan Library for the portrait of Anna van Thielen and her daughter, executed c.1631-32.3 One should also not ignore in this context the great series of portrait drawings that Van Dyck executed c.1627-35, in preparation for plates in the Iconography, the highly influential set of portrait prints based on Van Dyck's drawings, depicting major artistic and cultural figures of the day. Although those studies are generally on white, not blue paper, there are certainly similarities in handling with, for example, the Chatsworth portrait of Karel van Mallery.4

Another portrait drawing by Van Dyck in which the concentration is entirely on the hands and drapery, and the sitter's face is only cursorily indicated, is the splendid study on blue paper, in the Ecole des Beaux-Arts, Paris5, for the 1633 portrait of Queen Henrietta Maria and her Dwarf, now in the National Gallery of Art, Washington D.C., while also very similar in general approach to the present sheet, if somewhat more rapidly drawn, is the study for the 1634-35 portrait of Justus van Meerstraeten, in Christ Church, Oxford.6