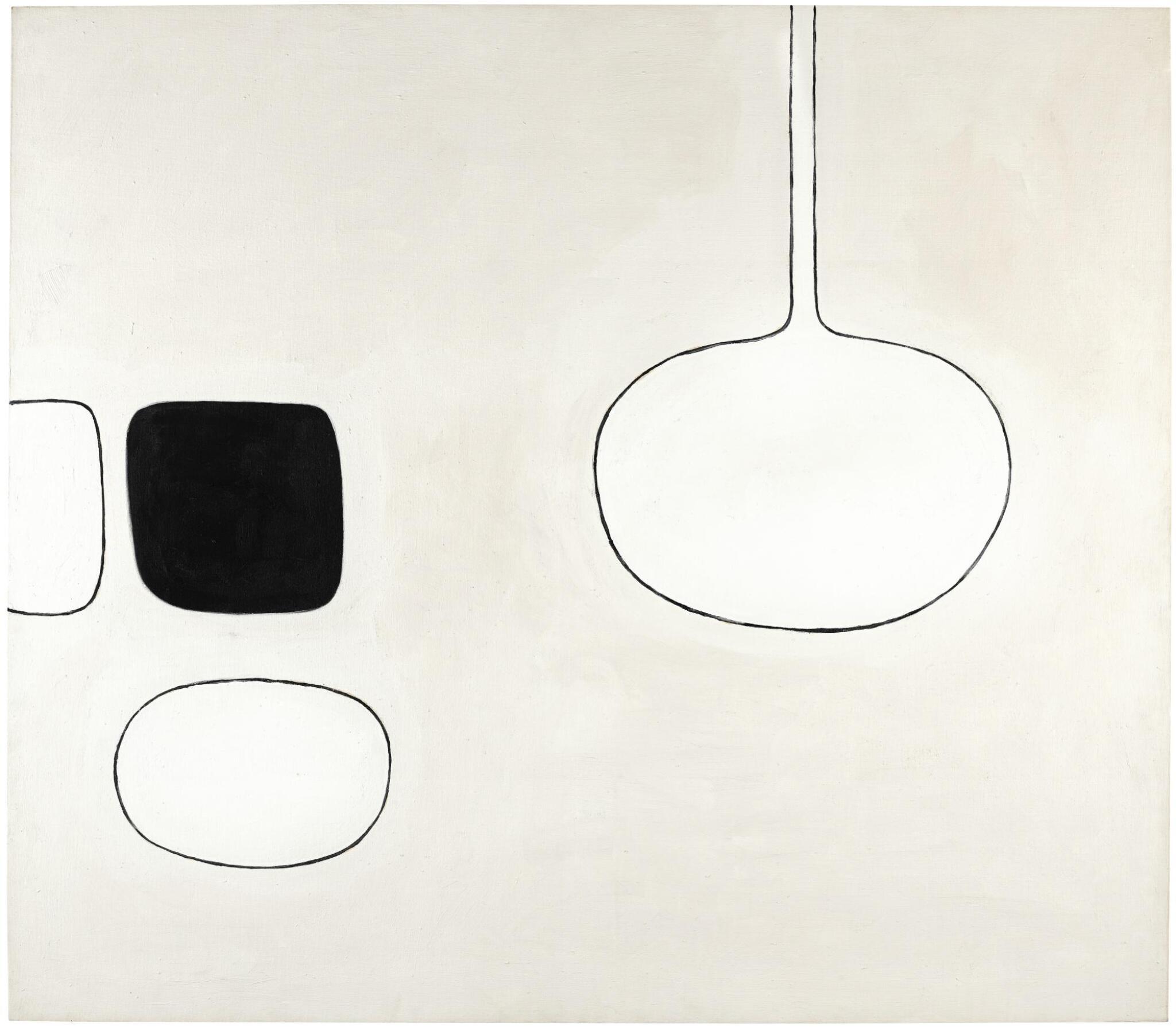 signed and inscribed on the reverse

Dawson Gallery, Dublin, where acquired by the present owners, 1973

We are grateful to the William Scott Foundation for their kind assistance with the cataloguing of the present work.

The first British artist of significance to meet the major members of the New York School, William Scott first encountered the Abstract Expressionists in 1953 in New York. Introduced by the dealer Martha Jackson, Scott met Rothko, de Kooning, Kline, Pollock and James Brook during the trip. His first impression of the group’s abstraction was: ‘bewilderment, it was not the originality of the work, but it was the scale, audacity and self-confidence – something had happened to painting’ (Scott, quoted in Norbert Lynton, William Scott, Thames and Hudson, London, 2004, p.109).

Even by the middle of the century, modern British art had not quite caught up with its American counterpart. The war years had proved troublesome and halting; artists lost over half a decade of development thanks to conscription, and the nation had become introverted and isolated (ibid, p.108). In Britain the St. Ives School still dominated, whereas artists in the States were pioneering a braver kind of abstraction thanks, in part, to access to world-class modern art collections at MoMA and the Guggenheim, but also to the influx of European artists such as Miró, Léger and Ernst during the inter-war period. Scott went on to say of his visit to New York: ‘I returned convinced that the Americans had made a great discovery and that the mood in England – a longing for a nice comfortable realist art – would not last much longer’ (ibid, p.109).

Regardless of his prediction, Scott remained true to his own style of painting. Preoccupied with nudes and still lifes, he shunned the more brash aspects of Abstract Expressionism - it’s volume and bravura - in favour of a particularly ‘European’ style. Skipping a delicate line between the abstract and the figurative, Scott took influence from clean, graphic neoclassicism and rich, textural elements of primitivism, the result being work with an economy of luxury. In 1954 he said: ‘I am an abstract painter in the sense that I abstract. I cannot be called non-figurative while I am still interested in the modern magic of space, primitive sex forms, the sensual and erotic, disconcerting contours, the things of life’ (ibid, p.8).

Even so, throughout the ‘60s and 70’s Scott’s work became progressively succinct. He stripped away the luxuriousness of his ‘50s paintings and became sharply focussed on still lifes which displayed a ‘conscious return to basics’. Using a restricted palette, economical compositions and disposing of the third dimension, Scott concerned himself with mastering depth and spatial frugality. With flat laconic clarity, these works became lessons in reduction: ‘a few notes cleanly struck, at finely judged intervals’ (ibid, p.317). These later works of Scott’s continue to show us still lifes, but they are nuanced and deliberate. The everyday household detritus - pots, pans, bowls, cups - are so delicate that they no longer exemplify steady domesticity. No detail is accidental. The closeness or distance of the objects from each other, their placing, number and size, touching or not touching, outlined or filled, are all ‘counters in a subtle pictorial game’ (ibid, p.312).

Appearing here for the first time at auction, White with Black Predominating was bought by Antoinette and Patrick Murphy after the couple had seen it at the Trinity College exhibition in Dublin in 1973. As a brewer for Guinness, Patrick travelled all over the world, acquiring artworks wherever possible, whilst Antoinette set up the Peppercannister Gallery in Dublin, showcasing some of the leading contemporary artists of the day. Patrick served as Chairman for the Arts Council Committee in Ireland, advising on purchases, as well as working on exhibitions that brought the work of key international artists such as Picasso, Lichtenstein and Rothko to many Irish audiences for the first time. Both developed a passion for collecting, with Patrick recalling ‘I spent every spare penny on art. I often went without an overcoat to buy my pictures!’.