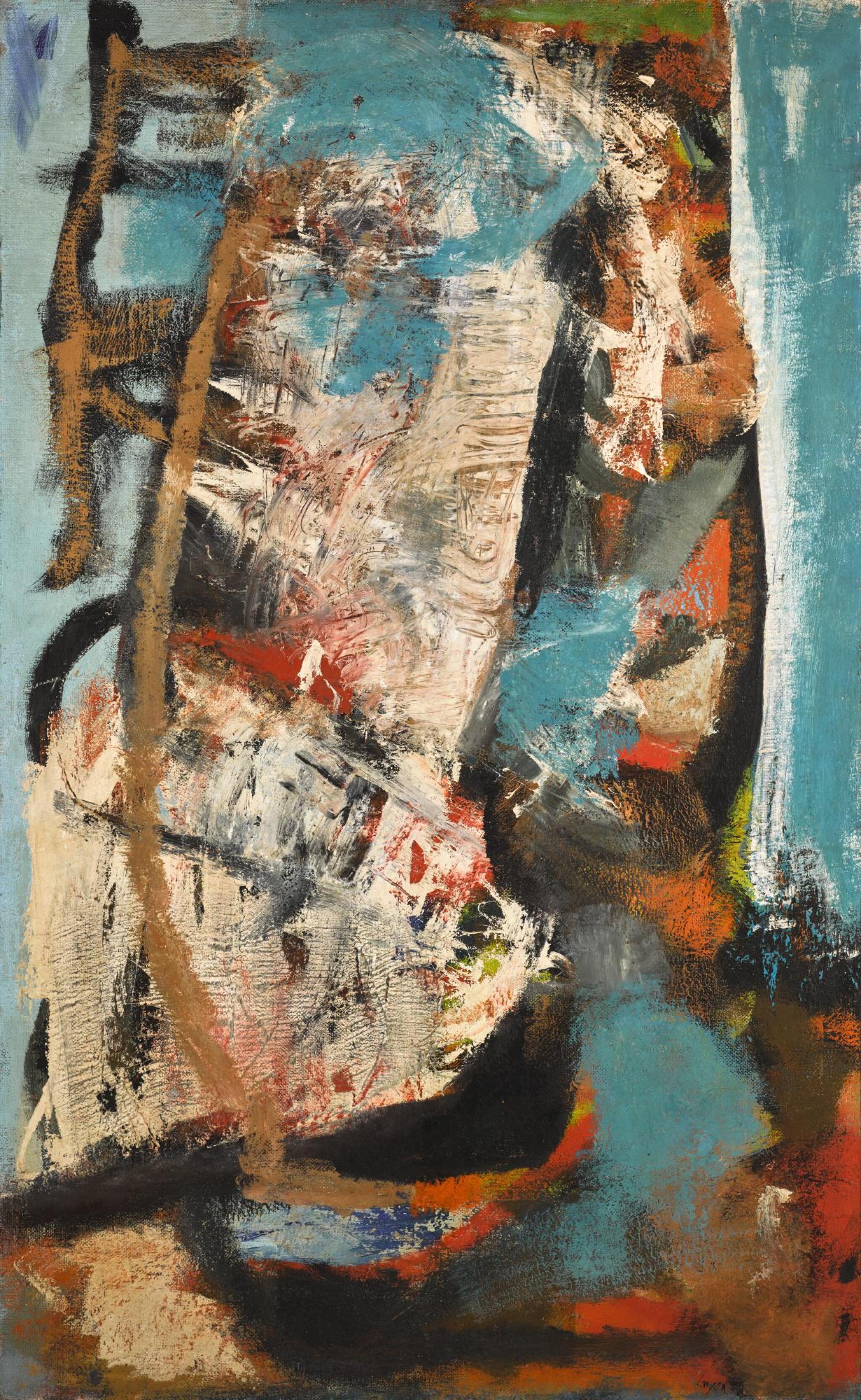 signed and indistinctly dated 58; also signed, titled and dated 1958 on the reverse

Catherine Viviano Gallery, New York, where acquired by the previous owner in 1962

Richard Green Gallery, London, where acquired by the present owner

‘I have always been concerned with painting weather… It is impossible for me to make a painting which has no reference to the powerful environment in which I live.’ (Peter Lanyon in a tape recording with Lionel Muskin, 1962)

We are grateful to Martin Lanyon and Toby Treves for their kind assistance with the cataloguing of the present work.

Towards the end of the 1950s, Lanyon’s focus began to shift away from the landscape, towards more temporal elements and physical experiences of his environment: gusts of wind, waves crashing, the flight of birds over cliffs. Taking inspiration from his native Cornwall and the Constructivism of Gabo, Hepworth and Nicholson, as well as broader artistic developments in western Europe and North America, Lanyon established a mature mode of working in which close attention was paid to the quality of the paint – which he ground and mixed himself – and a desire to develop a modern, post-Cubist approach to the landscape genre. The present work demonstrates Lanyon’s innovative, weathered effect as a result of such a mimetic and expansive technique.

Painted in the same year as Barley Wind and Harvest Mile, Dry Wind wonderfully evokes both the craggy landscapes of the Cornish coast and Lanyon’s Italian inspiration of Anticoli, which offered enormously fresh stimulus for his art in the 1950s (see lot 17). In 1953 he was awarded a painting scholarship and spent four months in Anticoli Corrado near Tivoli. Four years later, he returned to Italy and observed the rustic peasant life and rituals once again, creating a large body of work from such experiences. A keen walker, Lanyon explored the hilltop towns of Italy on foot, attempting to capture the dry terrain and momentary qualities of the dramatic weather conditions he saw there. He labelled a colour 35mm slide of the present work ‘Dry Wind Italy’ and in his own record book called the painting ‘Wind in the Italian mountains’.

Painted using a free, gestural technique with passages of thick paint concentrated in the centre of the picture, the present work can be interpreted as a ferocious dry wind blowing hard against the Italian mountains: a thick cloud against a deep blue sky and rustic landscape. Dry Wind epitomises Lanyon at his expressive best; through a surface animated by extensive sgraffito and the gestural spontaneity of his brushwork, the painting projects a considerable sense of movement and feeling of exhilaration. Such movement is entirely appropriate for the subject matter, which immediately transports the viewer upwards into the clouds as well as down into the earthy soil. Here, the complex colours used evoke a number of references; Lanyon’s rich palette of strong reds and browns – reminiscent of his Italian inspired paintings – is balanced by his broad strokes of light blue and white, anticipating the lightness of his paintings after taking up hang-gliding in 1959. Although this work was painted before this, the colours and mark-making suggest this new aerial perspective and his physical feeling of elemental forces of or through air.

The present work was first shown at the Catherine Viviano Gallery in 1959, where two years earlier Lanyon had held his first solo exhibition in New York. In fact, Dry Wind reflects the influence of the New York painters on Lanyon’s style and technique in the 1950s, particularly the Abstract Expressionism of Rothko, Pollock and De Kooning. In developing a distinctive, technically innovative art in parallel with such American contemporaries, Lanyon’s work from this period can be situated in the wider international context of contemporary artistic and ideological debate, in the wake of the Second World War. While clearly rooted in Lanyon’s Cornish identity, the present work demonstrates his resolutely international outlook, marking Lanyon as one of the most important and innovative figures in twentieth century British art.