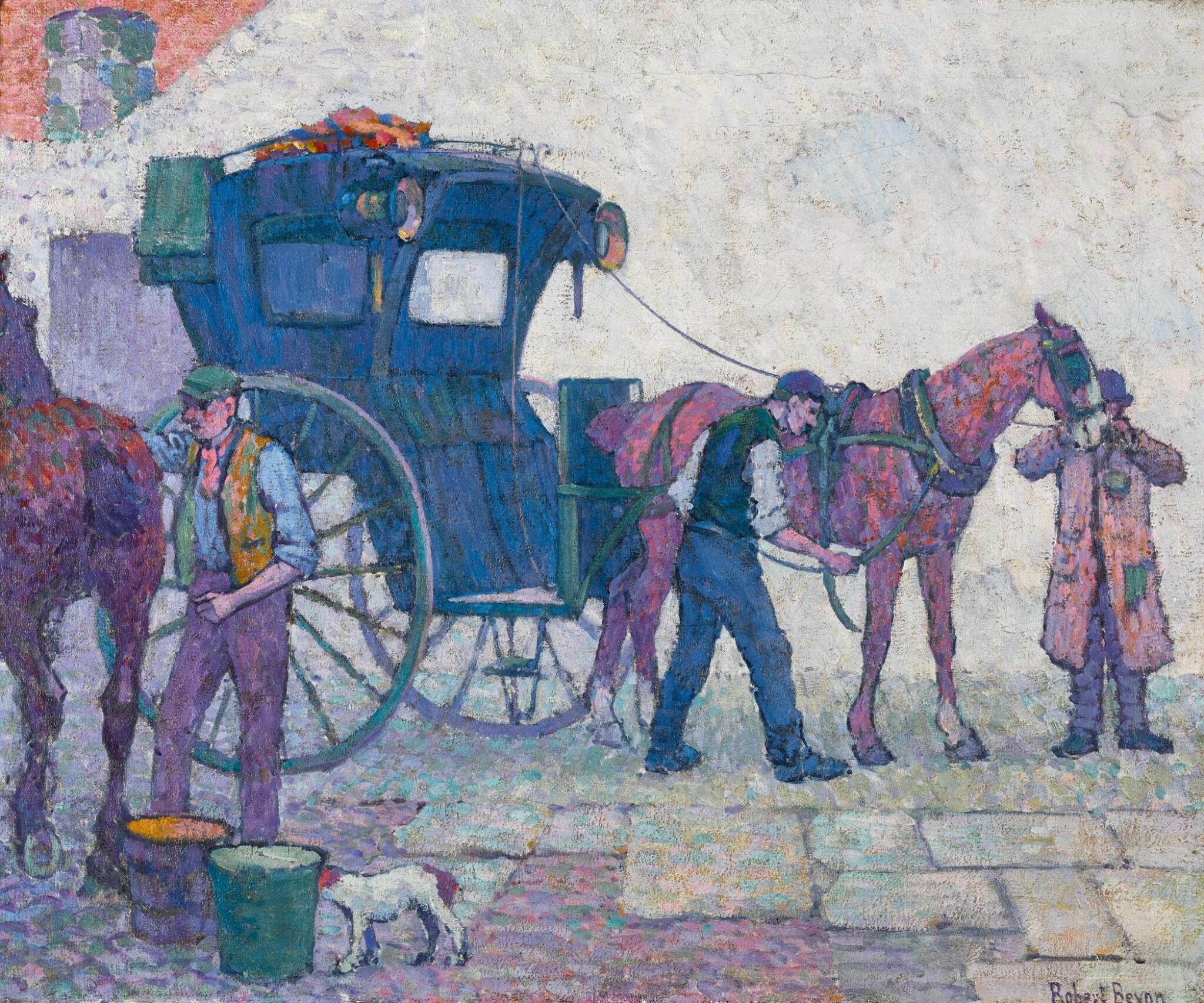 Acquired by Lt Col. J.K. McConnel and thence by descent to the present owner by the 1920s

We are grateful to Patrick Baty for his kind assistance with the cataloguing of the present work. Patrick is currently compiling the catalogue raisonné of the Artist’s work, and would like to hear from owners of any works by Robert Bevan, so that these can be included in this comprehensive catalogue. Please write to Patrick Baty c/o Modern & Post-War British Art, Sotheby’s, 34-35 New Bond Street, London, W1A 2AA, or email modbrit@sothebys.com.

‘Mr Bevan's colour is highly personal and may offend some by its honesty...This gives an extraordinary brilliance to his colour but tends to make it "unreal" in the sight of those, less gifted with colour perception, who see London in drabs and greys and biscuit tints.' (Frank Rutter, Sunday Times, April 1915, reproduced in Frances Stenlake, Robert Bevan: from Gauguin to Camden Town, Unicorn Press, London, 2008, p.122)

To many, the name Robert Bevan evokes images of horses first and foremost, affirmed by Philip Hendy's assertion that he was 'the best if not the only good painter of horses' in the twentieth century. But Bevan was not simply a 'horse painter,' his powerful and sophisticated paintings of cab yards place him firmly as instrumental in translating post-impressionist principles into a particularly English form. Bevan painted his cab yard scenes between 1908-1911, possibly under the influence of Sickert, who invited him to join the Fitzroy Street circle and with whom he founded the Camden Town Group. Sickert told Bevan to turn his attention to painting what he loved most. A keen rider and equine connoisseur, horses interested Bevan more than anything else and so it is of little surprise that he chose to paint the working life of urban equestrian subjects. The cab as a subject was of particular importance, for it was the way he represented himself in the first Camden Town Group exhibition. The subject of three of the four works exhibited were the cab yard which included The Cab Horse now in the collection of the Tate. These works were praised for their 'imaginary and fantastic' sense of colour conveying the working life in the stable yard.

This particularly refined example, owned by family friends of Bevan since first purchased, and not seen in public for nearly seventy years, demonstrates Bevan's first-hand knowledge of the French avant-garde through his close contact with the Pont-Aven School in Brittany. The radical use of cool impressionist tones and pointilliste technique demonstrates his loyalty to the principles of Gauguin who he met in 1894. Indeed at the time this work was painted, the wider British art scene was still reeling from the impact of Roger Fry's first controversial exhibition of French post-impressionism, held in London in 1910 and considered by many as an outrage against good taste. Bevan, on the other hand, had already seen what the great French painters had to offer. The time spent in France had a profound impact on his work, and his revolutionary use of colour is fully present in this painting. He captures the setting sun on the cab yard through his mastery of tonal variation: rich lilacs, mauves, purples, oranges and reds sweep across the work contrasting with the drab whites, greys and creams of the yard. As such it is a wonderful example of the revolutionary technique that Bevan developed during the early years of the century, very much in advance of mainstream British art. This well-honed understanding of light and colour is combined with a carefully planned organisation of space and close observation, reflecting Bevan's keen interest in the routine interaction of cabman, yard lad, client and horse, all distinguished by their different clothing. This is a scene from working-class life, most likely set in Ormonde Place or Queen's Terrace in St John's Wood and a commemoration of a working horse rather than a sleek thoroughbred. Bevan's son noted: 'he continued to study horses not only as types but often as individuals with love and understanding' (R.A. Bevan, Robert Bevan 1865–1925: A Memoir by his Son, London 1965, p.20).

The extent to which Bevan's cab yards of London have become a subject with which he is so strongly identified, is testament to the appeal these works have, both as fine examples of modern British painting and evocations of a past era of the city. Bevan was painting his cab-horse pictures at a time of rapid transition, when the traditional horse-drawn cab was being replaced by motorised cab and and horses were disappearing from the city landscape. The Hansom Cab represents a pivotal moment of transition from the old world to the new which even at the time of painting would have had particular resonance to the contemporary audience. Frank Rutter highlighted this when they were first shown in the Camden Town Group exhibition in 1911: 'His decoratively conceived and shrewdly observed paintings of the vanishing cab-horse in the street and stable are in some respects the most remarkable pictures in a remarkable exhibition. To their great and obvious artistic merits they have added a genuine historic interest, and they are precious documents of rapidly disappearing phases of London life' (Frank Rutter, 'Round the Galleries', Sunday Times, 25 June 1911, p.5).