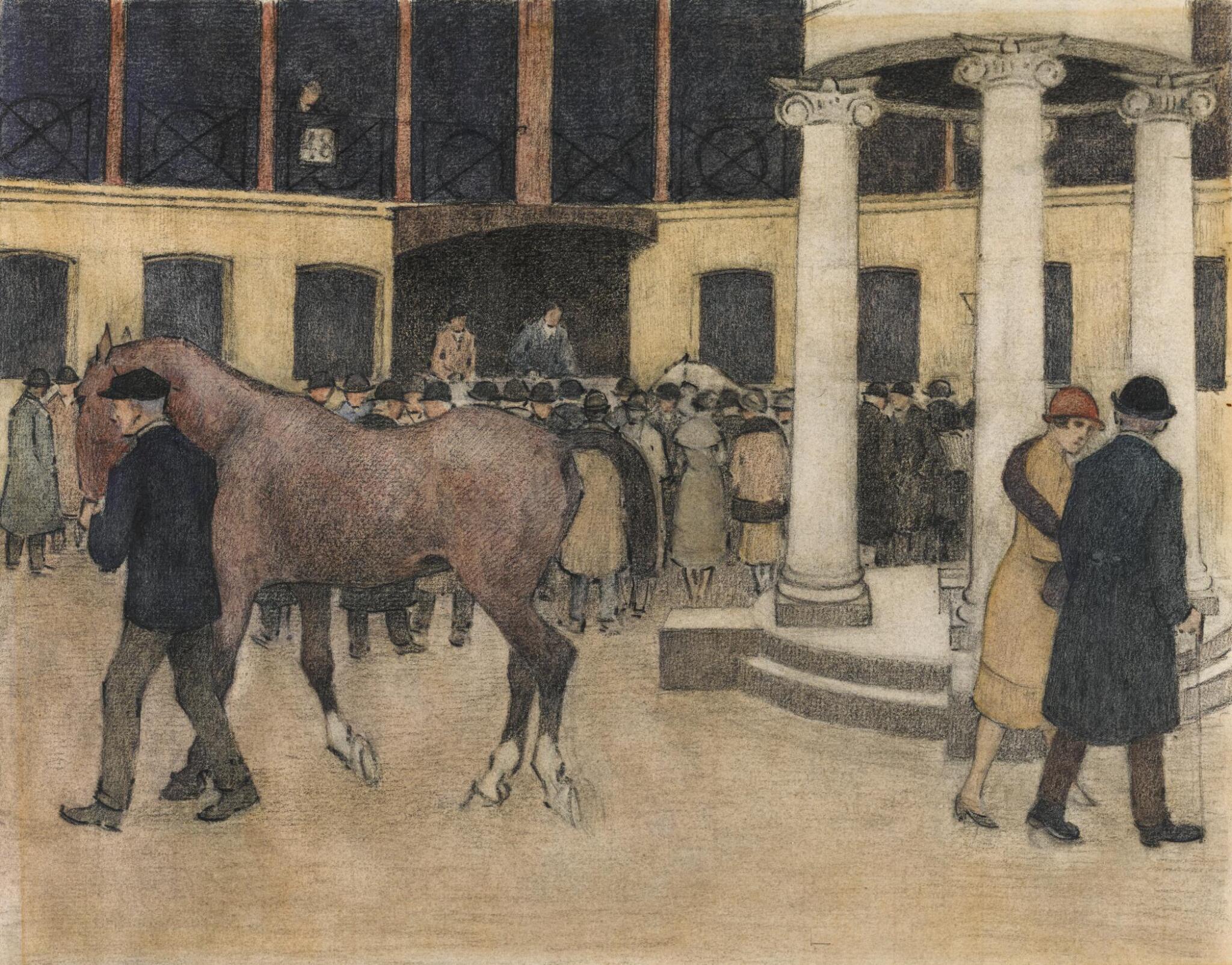 pencil, watercolour and crayon on paper

Acquired by Lt Col. J.K. McConnel in the 1920s and thence by descent to the present owner

We are grateful to Patrick Baty for his kind assistance with the cataloguing of the present work. Patrick is currently compiling the catalogue raisonné of the Artist’s work, and would like to hear from owners of any works by Robert Bevan, so that these can be included in this comprehensive catalogue. Please write to Patrick Baty c/o Modern & Post-War British Art, Sotheby’s, 34-35 New Bond Street, London, W1A 2AA, or email modbrit@sothebys.com .

At Tattersall’s depicts one of Bevan’s favourite urban haunts - the horse auction. Bevan regularly sketched scenes from four different horse-markets: Rymill’s at the Barbican, Aldridge's on Upper St Martin's Lane, Ward’s Repository on Edgeware Road and Tattersall’s in Knightsbridge, the subject of the present work. His sketchbooks donated to the Ashmolean show how significant these preparatory drawings were to his working methods. Later these would be worked up into finished paintings or drawings such as this iconic work which was executed when Tattersall’s was located in a grand, glass-roofed hall in Knightsbridge just up the road from Harrod’s. Tattersall’s was associated with the finest horses bought by aristocratic clients. The retail environment of that part of London has changed little in 200 years, only now it is the McLaren sports-car showroom rather than stables for thoroughbreds.

In this work, Bevan’s easy familiarity with horses is plain to see (he grew up in Sussex where he hunted regularly). His son, R.A. Bevan, who often accompanied his father on drawing expeditions recorded that Bevan ‘rather relished looking like a man who had to do more with horses and hounds than with canvas and paint ... He always looked at home at Tattersall’s and other places where the horse took the centre of the stage. He looked neither like a Bohemian nor like a business-man ... As children we were very conscious of the importance of the horse in our father’s life. We were often allowed to go with him when he was making drawings ... At Tattersall’s and Aldridge’s, the Barbican and Ward’s Repository there would always be a word or two with dealers and with handlers – and even with the bearded, top-hatted auctioneer – who all seemed rather surprised that anyone should think they were worth drawing’ (R.A. Bevan, Robert Bevan 1865–1925: A Memoir by his Son, London 1965, p.20).

The combination of Bevan's distinctive outline drawing, simplification of form, subtle handling of shade and colour and careful balance in the composition, creates an evocative rendering of the auction sale in progress. We are placed at the edge of the action, in the throng of the large main auction yard as a bay horse is being walked before going up for sale. Bevan captures the frenetic bidding from an enthusiastic crowd who huddle around the auctioneer on his raised wooden rostrum. In this work the people are observed as keenly as the horses. It is unusual amongst Bevan’s paintings of the sale-rooms that women are represented. By 1921 when this work was executed, the auction had become a social event amongst London’s elite. Smartly dressed couples are in attendance, such as the couple on the left chatting as they casually walk on by. The magnificence of the building is also captured in this work. On the first floor we see an arcaded gallery where buyers could view the horses without getting involved in the hustle and bustle below. The classic cupola on the right of the drawing housed a drinking fountain surmounted by a fox with a raised paw. It survived the bombing which destroyed most of the building during World War II and was relocated to stand outside the firm’s new auction yard in Newmarket and has now become the Tattersall’s embelm.

The auction shown in this work is remarkably similar to modern horse auctions. The most important sales are still considered a social event and follow the same traditional format that Bevan, both an avid participant and observer, captures so evocatively in this work. Bevan would feel quite at home at Tattersall's today.