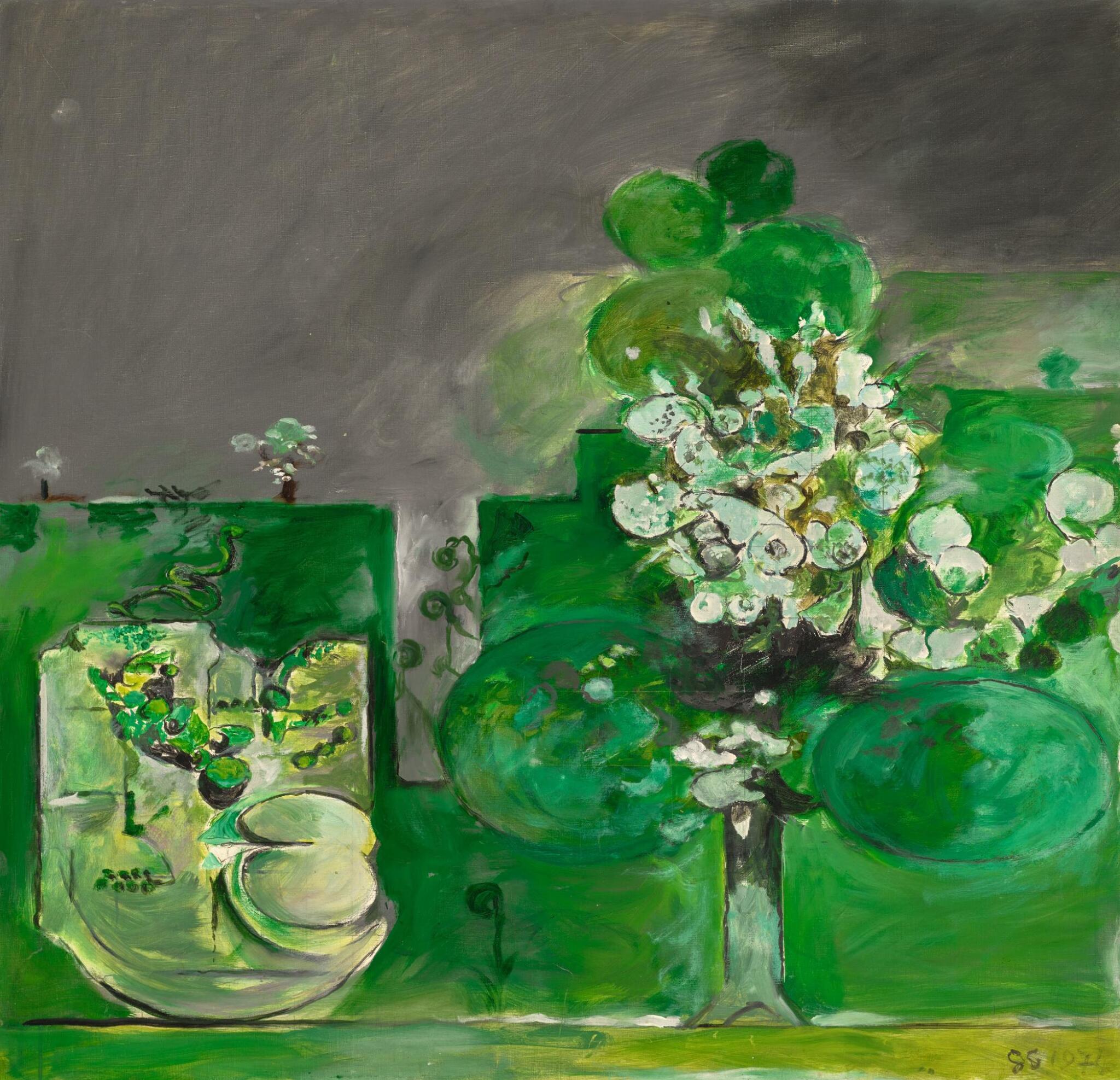 The canvas appears original. It undulates slightly. There is some minor craquelure along the top edge of the work. There are small lines of reticulation to the form of the snake, and to several very small patches of the large tree in the right half of the painting. There is a scratch with two minor dots of associated loss and slight rubbing in the upper left quadrant of the painting, with possible further more minor instances elsewhere. There is a light scratch to towards the centre of the lower edge, and a few more minor instances elsewhere. There is some light surface dirt and studio detritus, and spots of staining. This excepting, the work appears to be in good overall condition.

Inspection under Ultraviolet light reveals slight fluorescence and small patches of possible retouching towards and along the edges of the upper right quadrant, with further areas of retouching along the upper edge. There are other areas where the pigments fluoresce, but this appears to be the hand of the artist.

The work is presented in a wooden box frame.

Private Collection, Italy, from whom acquired by the present owner

'I wish I could give you some idea of the exultant strangeness of this place ... The whole setting is one of exuberance - of darkness and light - of decay and life. Rarely have I been so conscious of the contrasting of these elements in so small a compass...' (Graham Sutherland on Pembrokeshire, Horizon, April 1942, pp.225-35).

In 1967 Sutherland returned to Pembrokeshire for the filming of a documentary about his work by the Italian director Pier Paolo Ruggerini, Lo specchio e il miraggio. It was the first time in over twenty years that he had found himself in the landscape that had inspired his early career. His re-engagement with South West Wales was immediate and powerful: ‘... I thought I had exhausted what the countryside had to offer both as a “vocabulary” & as inspiration. I was sadly mistaken…’ (Graham Sutherland, letter of 17th March 1976, quoted in Sutherland in Wales, Alistair McAlpine, London 1976, p.6).

The following year he made the first of many return visits and the work of the last decade of his life was almost entirely dominated by Welsh landscapes focusing on the enduring themes of his oeuvre: the twisted organic forms which had first intrigued him in the 1930s, but now seen with fresh eyes with over twenty years of experience behind him.

This work evocatively portrays the strange organic forms Sutherland observed in nature as he strolled along the riverbank. It was during this second stay that he first came across the distinctive U-shaped tree form that inspired the structure of the present work. Found in the estuary at Picton in South Pembrokeshire, the form first appeared in U-Shaped Form (1968, Private Collection) and has become a recognisable motif in other works from the period.

The use of found natural objects had long been a source of inspiration in his work and he later explained his fascination for the intriguing and contorted tree shapes that he had found at Picton:

'the trees are eroded by the tide and wind ... they have the most extraordinarily beautiful, varied and rich shapes which detach them from their proper connotation as trees. One does not think of them so much as trees, more as figures; they have the same urgency that certain movements of figures can have in action' (Graham Sutherland, The Listener, XCVIII, 1977, p.231, quoted in Graham Sutherland, (exh. cat.), Tate, London, 1982, p.157).

Unlike the early oils, which were often densely worked, in the present work, Sutherland applies the paint thinly allowing the colours to bounce back off the white of the primed canvas and imbuing the whole with a glowing and poetic light. This new approach to colour is often seen as the result of the increasing amount of time Sutherland spent in the South of France from 1947, eventually buying a house in Menton, near Nice, in 1955.