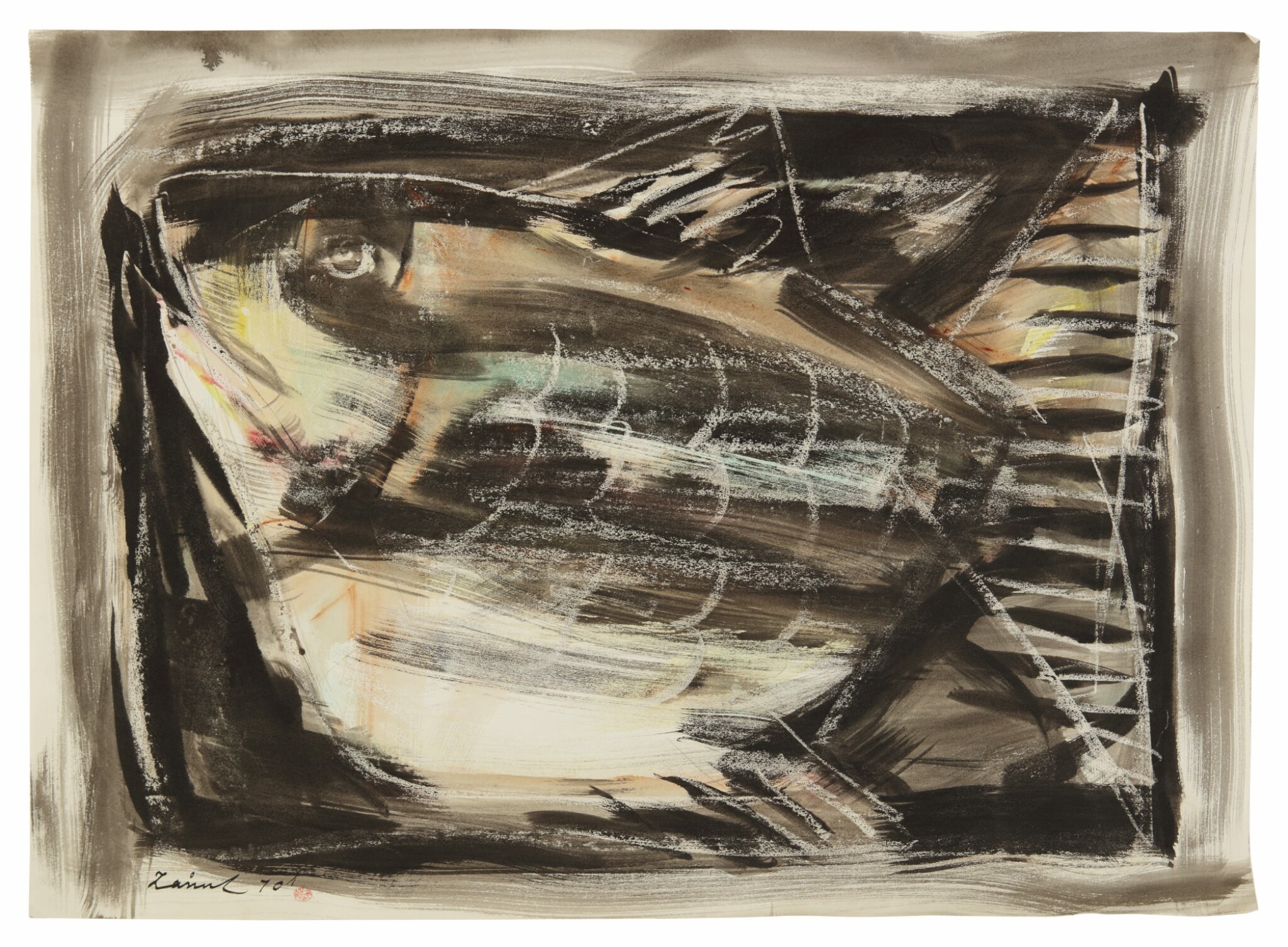 This work is in a temporary frame.

There is slight wear and creasing along the edges with a small 1/4 inch tear in the lower right edge. Minor spots of foxing are visible but only upon very close inspection. This work is in very good condition, as viewed.

Acquired from the above in 2019

Born in 1914 in Kishoreganj, in the erstwhile East Pakistan, Zainul Abedin played a pioneering role in the development of the modern art movement in Bangladesh. He studied painting at the Government School of Art in Calcutta from 1933 to 1938 where he also taught until 1947. In 1948 he founded the Government Institute of Arts and Crafts (now Institute of Fine Arts) in Dhaka and was its first Principal.

‘The rural proletariat and the nature of Bangladesh have been his most favorite subjects.’ (M. Islam, Art Of Bangladesh Series 1. Zainul Abedin, Eastern Regal Industries, 1977, unpaginated) His childhood spent along the idyllic, pastoral landscapes of the Brahmaputra River, had a formative influence on his work. Throughout his career he turned repeatedly to nature depicting vignettes of the timeless, expansive, unspoiled rural landscapes of his childhood along with its inhabitants for which he eventually won the Governor’s Gold Medal of the Academy of Fine Arts in the All India Art Exhibition, in 1938. However, the most dramatic shift in his subject matter came after he graduated from the Calcutta Government School of Arts. In 1943, when Abedin was 29 years of age, the Bangladesh he knew transformed and mutated before his eyes, scarring him with scenes of harrowing human exploitation and degradation – a famine had broken out in his homeland. When he returned to Mymensingh, he was met with the horrific realities of the famine, he witnessed starving men, women and children, struggling to find much needed food for survival. Abedin wasted no time transferring these nightmarish scenes into compositions, using the affordable medium of black ink and wrapping paper. The artistic prowess with which he documented these scenes, earned him much acclaim as a pioneer of artistic social commentary.

Zainul Abedin’s Famine Sketches demonstrated his passionate and unwavering commitment to helping the people of Bangladesh. He persevered in sincerely and assuredly depicting the damned as well as the beautiful, with uncompromising realism. The period following the famine was one of the most tumultuous the artist had ever witnessed - World War II was raging, then came Partition and with it the Mass Movement of 1969. The year 1970 brought further devastation to the people and landscape Abedin knew so well when a cyclone ripped through Bangladesh killing over 300,000 people, and before the country could recover from this disaster, the War of Liberation broke out. This current work, painted in that seminal year, has the artistic maturity gained from decades of practice but is also rendered with all the feeling and emotion of his early works based on nature. Here we see, his classic rapid brushstrokes, sweeping lines accentuated by the use of wax over the ink and wash drawing.

Despite the political and natural tragedies life threw into Abedin's path, he continued to produce works that spoke about his love for his country and his people. The body of work he left behind is testament to the wide range of subject matters he was determined to immortalize. From the dark scenes of the famine to the lustrous depictions of Bangladesh’s rivers, women collecting water, farmers, fishermen and animals regularly pervaded his canvases, refusing to be overlooked or ignored.

Abedin favored Bengal modernism over the neo-classicism of the Tagores or the folk revivalism of Jamini Roy. Instead he fashioned his own panache using highly abstracted and stylized figures, simplifying his arrangements and utilizing primary colors. Abedin tragically died of lung cancer in 1976 at the age of 62 and was buried in Dacca. During his lifetime, his work was exhibited at Alhambra, Lahore; Damaru Galleries, Tokyo; Islamiah College, Calcutta; Burlington House, London; as well as a world tour sponsored by the Rockefeller Foundation to USA, Canada, Mexico and Europe, culminating in 52 of his works being exhibited at the Smithsonian Institution, Washington D.C. in April 1957. He attended the Slade School of Arts in London and presented his works in the Berkeley Galleries. In 1948 he founded the Government Institute of Arts in Dacca which went on to become the Bangladesh College of Arts and Crafts at the University of Dacca. ‘Always a peoples’ artist and a peoples’ man’, ‘the role of Zainul Abedin in the development of fine arts in Bangladesh is best expressed by the title Shilpacharya – Great Master of the Arts.’ (N. Islam et. al, Great Masters of Bangladesh: Zainul Abedin, Bengal Foundation, Dhaka, 2012, p. 55)