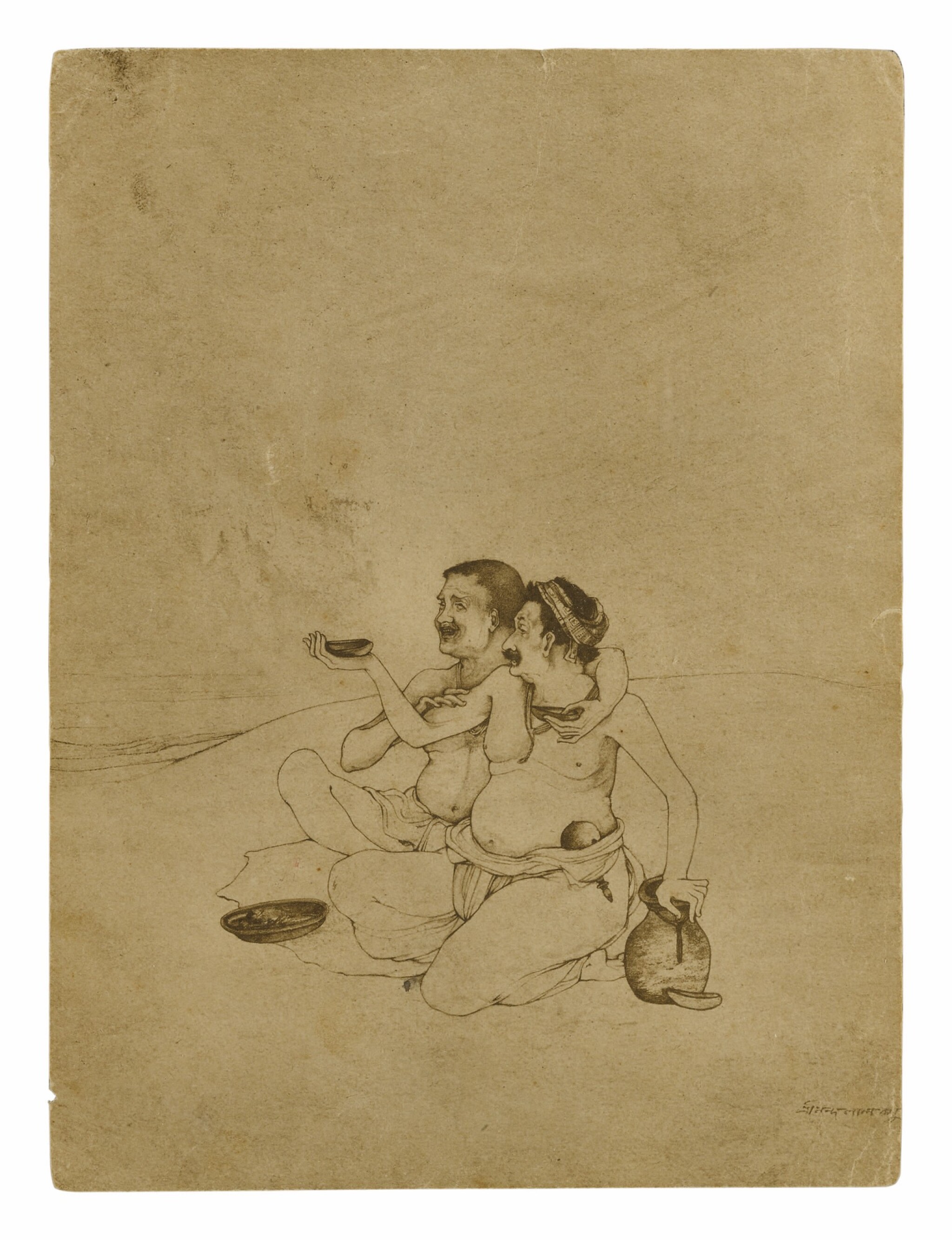 There are tiny micro-tears, notably along the top and right edge as well as a small loss to paper in the lower left corner. The creasing and wear in the work is commensurate with age. Smudge marks along the left edge are inherent.

Acquired from the above in January 1972

Nandalal Bose is widely regarded as one of the pioneers of modern Indian art. A student of Abanindranath Tagore, Bose’s art was popular for its 'Indian-ness'. In the current lot, Bose represents the famous Vaishnava story of Jagai and Madhai. These were two brothers who were born into a high Brahmin family but due to bad associations fell prey to various vices. Eventually they were embraced and forgiven by Chaitanya Mahaprabhu, a Bengali Hindu saint, and the chief proponent of the Achintya Bheda Abheda and Gaudiya Vaishnavism tradition within Hinduism. He had deep religious and cultural impact in Bengal and has been credited with the revival of Hinduism in Eastern India.

This lithograph comes from the original drawing of Jagai Madhai which now resides in the collection of the Indian Museum of Kolkata. The exact dating of the lithograph is unknown but the drawing is dated circa 1906-07. There are known to be only five editions of this lithograph.

This work is considered to be one of the most popular works of Nandalal Bose. Speaking of the work, renowned art historian, Partha Mitter has remarked, ‘…it is another of the great technical triumphs of the artist and the school… [A work] at once so small and so perfect… Firm anatomical drawing, the strokes that in their thousands make hair, the definite and harmonious patterning of the turban… And how exquisite is the sum total! An extraordinary proof of the technical perfection of this tiny work lies in the fact that under a magnifying glass, it is the modeling of the two faces that becomes most prominent.’ (P. Mitter, Art and Nationalism in Colonial India, 1850-1922: Occidental Orientations, Cambridge University Press, 1994, p. 323) In this beautifully intricate lithograph, like most of Bose’s early works, the subjects occupy the main space in the foreground; the background is devoid of any detail enhancing their presence.