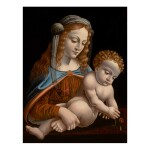 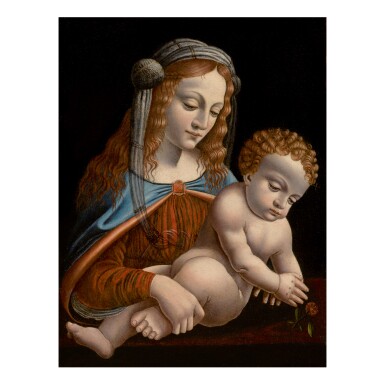 This painting is in sound condition overall and presents nicely. The varnish is clear with an even gloss. Not all retouching on the painting is obvious even with ultraviolet illumination. Very careful retouching knits together modeling, particularly in the flesh passages. Retouching also addresses thinned glazes and possibly losses in the red dress, a cluster of losses near the child's elbow, a series of losses in the child's cheek, and increased transparency in the background and the darks of the hair. Where the Madonna's hair falls across her blue mantle, some of the highlights of the waves have been reconstructed. Much of the pattern in the knot of the Madonna's headscarf is reconstructed. Retouching in the center of the Madonna's forehead may be related to a defect in the wood support. The vertically grained wood panel displays a moderate convex lateral warp. The panel appears to retain its original thickness and bevels on the reverse.

This painting may be enjoyed in its current state and shows no need of conservation treatment.

His sale, Milan, Galleria Scopinich, 21-22 November 1932, lot 127 (as Milanese school of Leonardo, circa first decade of the sixteenth century);

Bernardino de' Conti painted this tender depiction of the Madonna and Child around 1500.  A degree of stillness and serenity seems to be woven throughout the scene, all of which is set against a dark background. The head of the Madonna, adorned with a beautiful headdress, turns downward towards her curly haired son, who has wriggled sideways to reach for a small red carnation.

Bernardino de' Conti was one of the main figures in the circle of late quattrocento Milanese artists inspired by Leonardo da Vinci who arrived in Milan in circa 1482-1483.  This composition clearly draws on elements found in works by Leonardo and his contemporaries. The headdress of the Madonna recalls that of Leonardo’s Madonna Litta, which he completed in Milan circa 1491-1495 (The Hermitage, Saint Petersburg) [1]. The Madonna and Child share visual affinities in a variation by Marco d’Oggiono completed in Milan circa 1498-1500 [2]. The twisting pose of the Child as well as the pose of the Madonna, with her arm reaching around into the foreground to steady her son, appear in a series of earlier studies that Leonardo executed for Madonna del Gatto, as seen in a sheet in the Galleria degli Uffizi in Florence [3] and another in the British Museum, London [4].

A Note on the Provenance:

A nineteenth-century label on the reverse attributes the painting to the “Cavaliere Melzi,” meaning Francesco Melzi, a pupil and sometimes collaborator of Leonardo during his time in Milan. That same label also provides the nineteenth-century provenance for the painting. Count Carlo Castelbarco had a large collection housed in his Palazzo in Milan (memorably visited by Sir Charles Eastlake in 1855 and described by his wife Elizabeth) [5]. Castelbarco’s mother was a Freganeschi and it is likely that the painting passed from her into his collection. In 1831, he married Antonia Litta Albani, thus joining the family names to Castelbarco-Albani. Similar labels are found on other paintings, including on the Putto picking Grapes by Bernardino Luini, a transferred fresco from the Villa Peculla near Milan, now in the Wallace Collection, London [6]. Eastlake noted that the collection was already on the market when he visited (he was later able to acquire an Altobello Melone for the National Gallery). Other paintings had been sold, until the balance of the collection was dispersed on 2-6 May, 1870 in Paris. The present painting does not appear in that series of sales and was presumably sold before 1870.