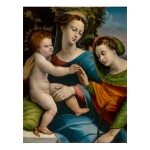 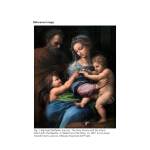 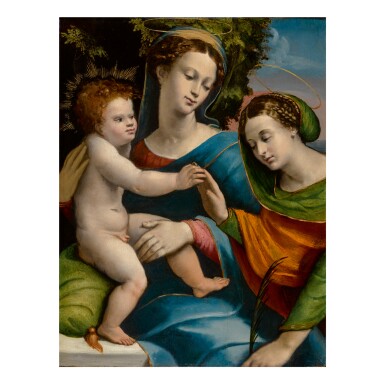 THE MYSTIC MARRIAGE OF SAINT CATHERINE OF ALEXANDRIA

The following condition report has been provided by Karen Thomas of Thomas Art Conservation LLC., 336 West 37th Street, Suite 830, New York, NY 10018, 212-564-4024, info@thomasartconservation.com, an independent restorer who is not an employee of Sotheby's

This painting is in excellent condition overall. The paint layers are very nicely preserved and in the few areas where restoration exists, it is of the highest quality. To the right of center, two areas display some lines of grain-oriented tenting in the paint, in Mary's forehead and crossing from the child's foot into Mary's lap. A cluster of losses in the side of the child's head have been restored, but most of the retouching is limited to minute strokes in some of the shadows of the flesh passages. The painting is coated with an evenly glossy varnish that is free of discoloration. The vertically grained wood support displays a mild convex lateral warp, and on the reverse an old (possibly original) gesso layer is visible. It would be worth having the tenting paint set back in place to prevent losses from developing, otherwise this painting may be displayed in its current state and the excellent restoration may be expected to last for many years to come.

A. Bliznukov, in The Alana Collection: Italian Paintings and Sculpture from the Fourteenth to the Sixteenth Century, M. Boskovits, ed., vol. II, Florence 2011, pp. 110-114, cat. no. 18, reproduced (as attributed to Dosso Dossi and dated circa 1525).

Battista Dossi, the younger brother of Dosso, was primarily active in Ferrara, where he served alongside his brother in the Court of Alfonso I d’Este and Ercole II d’Este. He probably trained in Rome in Raphael’s workshop from around 1517 until the elder master’s death in 1520, after which he returned to Ferrara. Throughout much of his career, Battista worked under the guidance of his brother, and the two were known to have collaborated on a number of important works, including frescoes in the Villa Imperiale in Pesaro (circa 1530) and Trent Castle (circa 1531-1532).

Likely datable to the 1520s or 1530s, this tender rendition of the Mystic Marriage of Saint Catherine illustrates the impact of Raphael on Battista, for the composition and much of its details have visual roots in Raphael’s Madonna of the Rose of 1517 (Fig. 1). Battista likely encountered this painting when in Raphael's studio, where he may have made compositional sketches and had access to the preparatory drawings.  At the same time, the present work also displays the clear influence that Dosso had on his younger brother’s output during these years, particularly in the rendering of light, shadow, and a visual poeticism; therefore, it comes as no surprise that Dosso has more recently been proposed as the possible author of this panel. The delicately modeled faces of the Virgin and Saint Catherine recall Dosso’s style, as do the richly colored fabrics and the soft chiaroscuro that defines much of the painting’s atmosphere.

Saint Catherine of Alexandria was among the most popular of the "capital virgins," and her legend developed its own visual lexicon. The beautiful and highly intelligent daughter of a king, Catherine would only accept a husband who was her equal, and consequently rejected all her suitors. Learning that Christ was the only man to fulfill her criteria, upon being baptized Catherine had a vision in which He appeared and placed a ring on her finger as a symbol of marriage.  That union is seen here at the very center of the composition, with Catherine's shadowed palm lifted towards the soft hand of the infant Jesus, who presents to her a gold ring with a red stone.