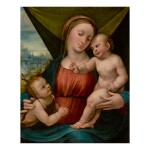 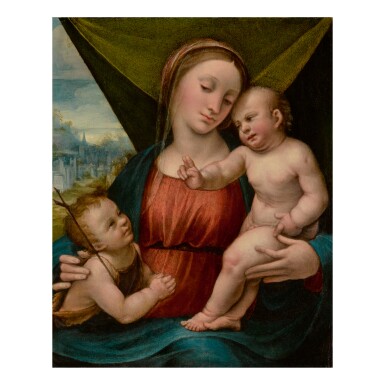 This painting is in good condition overall with little in the way of loss to the paint layer. The varnish is free of discoloration and the rich tonality of the artist's palette is clearly evident. Some of the modeling in the flesh passages has been carefully knit together to maintain the smooth transitions, but most of the restoration on this picture is concentrated in the green curtain, in the form of glazing to correct frequently-seen age-related alterations to the green pigment. Along the bottom few inches of the panel, fading and/or wear in the shadows of the fabrics has been restored. Some contours have been lightly reinforced to improve legibility, for example in the curls in the boys' hair where normal age-related increased transparency has reduced the contrast. The vertically-grained wood panel support displays a slight convex lateral warp and the join near the center is discerneable in raking light. The panel has been thinned and there is evidence that an old cradle has been removed; repairs to the reverse have been made to mend old cracks in the panel. The inset crossbars appear to be non-original but predate the now-removed cradle. This painting may be enjoyed in its current state and shows no need of conservation treatment.

This beautiful and softly lit scene of the Madonna warmly embracing her son and the young Saint John the Baptist is consistent with the mature output of Bartolomeo Ramenghi, named Bagnacavallo after his native town, and likely dates to circa 1530. The pyramidal arrangement of figures set before a curtain that opens upon a distant landscape—in the present case a fortified town at the foot of a mountain—appears also in other works by Bagnacavallo of circa 1520-1530, in particular his Madonna and Child with Saint Francis in the Musei di San Domenico in Forli [1] and in a Holy Family in the Pinacoteca Nazionale in Bologna [2].

Bagnacavallo trained as a young artist in Bologna in the thriving workshop of Francesco Francia, whose influence is apparent throughout much of the younger artist's career. The standing Christ Child in the present painting, for example, arose from Francia's visual vocabulary. The loose rendering of the poses, the intimate arrangement of figures, and the balanced composition, however, are a testament to the Raphaelesque tradition that characterized much of Bagnacavallo's work from 1520 onward. The delicate rendering of the figure's forms, particularly in the highlights and shadows, also sheds light on the influence that Giralamo da Treviso's Bolognese activity of the 1520s and 1530s had on Bagnacavallo, and it is of no surprise that many of his mature works have in the past been mistakenly ascribed to Girolamo.

While the present panel is a clear testament to Bagnacavallo's continued response to his artistic environment, it also highlights his distinctly individual style. It illustrates his ability to capture the relationship among figures through an intimate visual dialogue, and, at the same time, suitably exemplifies Baruffaldi's description of Bagnacavallo's "soft and tender pictorial manner according to the Lombard model" [3].