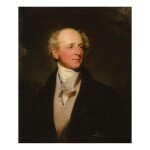 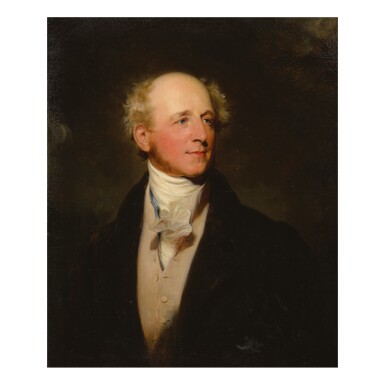 Property from the descendants of John Angerstein

The canvas has an old relining and is stable on its stretcher. Craquelure is present throughout and stable, and most pronounced at the 4 corners and edges. Frame abrasion is visible along the top, bottom, and lower left edges. An area of abrasion or damage measuring about 3 ½ inches in diameter visible in the lower right quadrant on the man's chest. The paint surface in the man's face is well preserved and retains individual brushstrokes. Under UV inspection, the varnish fluoresces unevenly in a streaky pattern and may mask an older campaign of restoration. Two areas of retouching are visible at the upper left corner to address frame abrasion and in the background to the right of the man's face. Offered in a decoratively carved gilt wood frame with scattered nicks and losses.

When Sir Thomas Lawrence died suddenly in 1830, he left behind many unfinished paintings, such as the present portrait of John Angerstein, MP. Lawrence most likely painted Angerstein’s head and face, which have the characteristic virtuosity of Lawrence's handling, while a studio assistant would have finished the body. Lawrence wrote to John Angerstein in November 1829 that he had finished the portrait, which was exhibited at the Royal Academy in 1830 (no. 427) [1]. Garlick believed the original portrait lost, but it seems the family commissioned this second version as well, described as “finished by Smart” in the 1896 Angerstein sale (see Provenance). The identity of “Smart” is still uncertain, but it cannot be the celebrated British miniaturist John Smart, who passed away in 1813. The latter had a son from his third marriage named John, born in 1805, who may have been the artist in question.

Interestingly, this portrait has remained with the sitter's descendants for almost all of its existence. In the 1953 sale, both the prime (lot 5) and this version (lot 9) were offered by descendants of the Angersteins. While the present lot was called “John Smart after Sir T. Lawrence, PRA” it achieved a higher auction price than the prime, which was attributed to Lawrence in full. The prime version was purchased by C.M. Burton, another descendant of the Angersteins, and the present version was purchased by Mrs. R.M. Bernard, who consigned it for sale in 1963, where it was purchased by A. Burton. At the time of the 2003 Wormington Manor sale, the owner was an Angerstein descendant related to Major Henry Burton, whose grandmother, Zoe Julia Angerstein, was the great-granddaughter of John Angerstein through his younger son William, previous owner of the painting.

Lawrence had a close relationship with the Angersteins, who were among his first patrons and served as a "substitute family" at times [2]. In addition to two or more portraits of John, he also painted his father, John Julius Angerstein (1735 - 1823), on several occasions. John Julius was a London businessman, chairman of Lloyd’s, and major art patron, whose collection, on the recommendation of Lawrence, formed the core of London’s National Gallery. John Angerstein was the only son of John Julius and his first wife, Anne, and served as Member of Parliament for Camelford from 1796 – 1802, and served again as MP for Greenwich for one term in 1835. He married Amelia (1777 - 1848), daughter of William Lock of Norbury Park, Surrey, with whom he had 3 sons and 2 daughters.