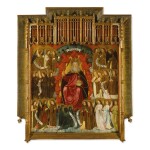 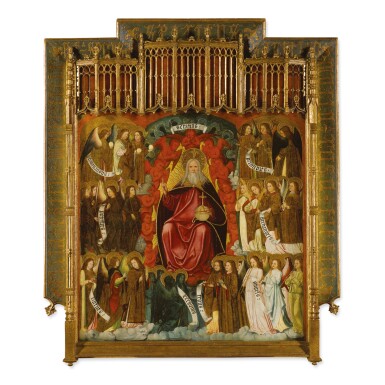 Property from a Canadian Collection

GOD THE FATHER ENTHRONED AND SURROUNDED BY THE CELESTIAL HIERARCHY

tempera, oil, and gold on panel

The large panel is made of at least three, perhaps four, vertical boards. It is supported on the reverse by three thick horizontal battens, each of which have smaller vertical supports that span the length of the supports. There is some slight warping to the central panel, at and around the central figure of God, and there is one raised area, possibly a knot in the wood, in the lower right portion of God's robe. There are stable cracks visible throughout the panel and along all of the aforementioned joins. There are retouches and reinforcements throughout and along the joins and some of the cracks. Inspection under UV light reveals a few campaigns of restoration to the entire panel, and some spots and strokes fluoresce stronger than others. Some of these campaigns appear to have been somewhat more extensive than others. Strengthening and retouching is visible, for example, in the reds of the seraphim, in many of the angels' faces, and in the details of their costume. The most concentrated area appears in the figure of God and in the center of his red cloak, and most of this area of restoration coincides with a large vertical join. Offered in an elaborately carved tabernacle frame with a raised gate and spires. The frame is gilded and painted. The painting can hang in its present state.

With Ludwig Losbichler Gutjahr, Barcelona, by 1955 (according to a photograph in the Amatller Archive, Barcelona);

This large, colorful, and impressive panel depicting God the Father and the celestial hierarchy was likely meant to serve as a central element for a large polyptych in a Catalonian church. The hierarchy of nine orders of angels in perpetual adoration surround the Father seated at center with an orb in one hand and the other raised in blessing. Red Seraphim encircle his seated body, while at his feet are kneeling blue Cherubim and standing Thrones. Divided in three registers to either side of the Father are six choirs of angels: at the top are Dominions and the Principalities, in the center are the Powers and the Archangels, and at the bottom are the Virtues and the Angels, the latter of whom serenade the scene with their celestial horns.

Although published by Post as Gabriel Guardia [1], this work has more recently been rightly attributed to Joan Gascó, a Catalan artist of Navarrese birth who was active primarily in Vic during the first quarter of the 16th century. It closely compares in handling and technique to other known works in Gascó's oeuvre, including the prophets Abraham and David from the high altar of San Esteve in Granollers datable to circa 1500 [2] and an altarpiece of the Virgin and Child with Saint Anne from the convent of the Misericorde in Vic. [3] Gascó completed another large polyptych of Saint Peter formerly in Santa Maria de Palautordera around 1516 [4].

We are grateful to Professor Santiago Alcolea, who has examined the present work firsthand, for endorsing the attribution and for his kind assistance in the cataloguing of this lot.

1. Post's argument rested on his comparison to another altarpiece from formerly thought to be by Guardia but more recently identified as a work of Antoni Marquès. See F. Xavier Altes I Aguiló, "Antoni Marquès, Veritable Pintor del REtaule de La Santissima Trinitat de la seu de Manresa "1507" in Miscellania liturgica catalana, vol. 16, 2008, pp. 169-199. Many works formerly attributed to Guàrdia have now been given to other hands.