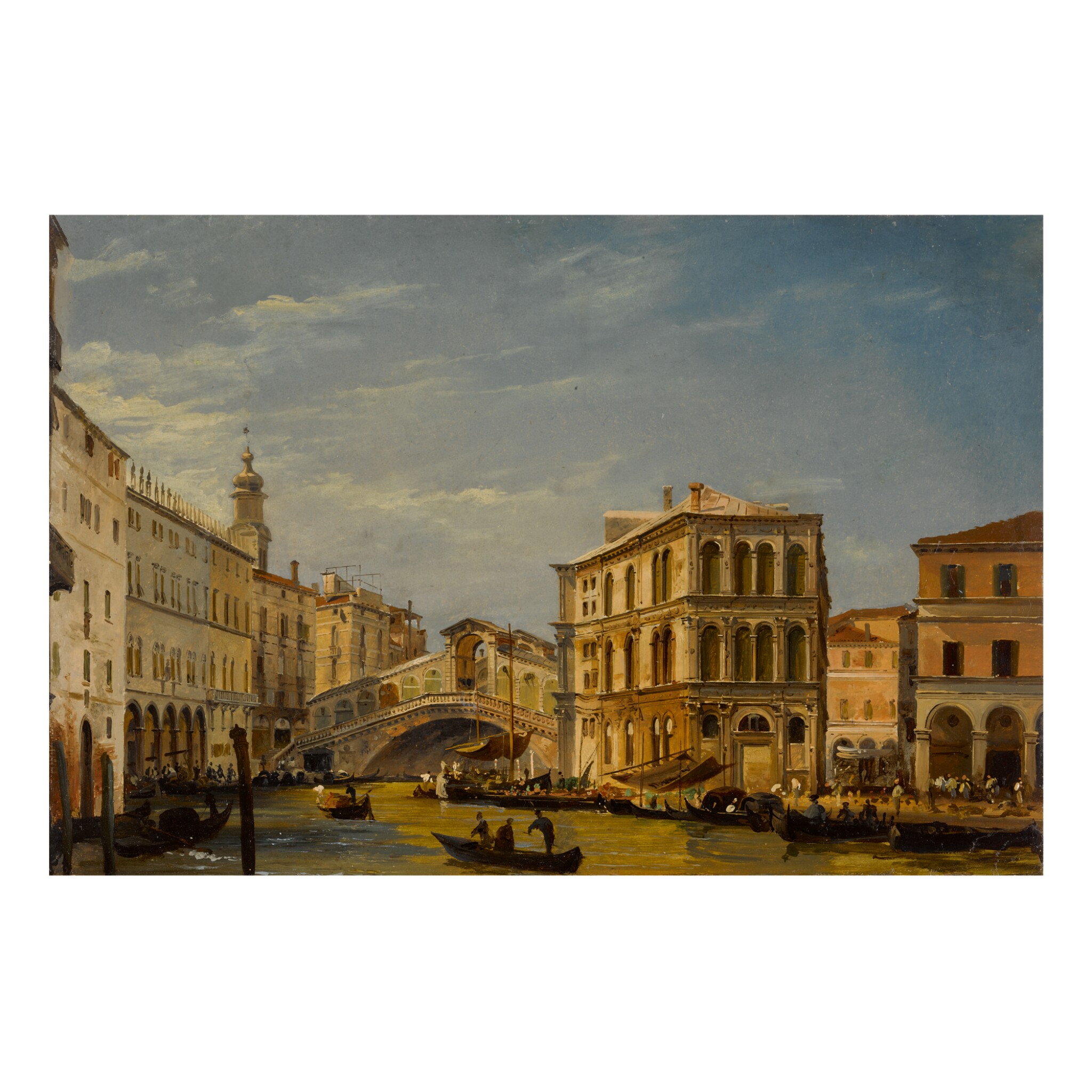 VENICE, A VIEW OF THE GRAND CANAL WITH THE RIALTO BRIDGE AND THE PALAZZO DEI CAMERLENGHI

Bathed in a warm afternoon light, this hitherto unpublished Venetian view of the Grand Canal with the Rialto Bridge and the Palazzo dei Camerlenghi is an important addition to Ippolito Caffi’s known body of work. Though loosely rendered, it records a faithful impression filled with a sense of life and immediacy. Small touches of white in the lower left corner echo gently rippling waves, while multicolored spots along the shore at right visually resonate as a busy marketplace. With only slight modulations in light, shadow, color, and brushstroke, Caffi recreates a scene that wholly transports his audience to this bustling corner of the Grand Canal. It is this very quality, an almost poetic response to his subject matter, that so clearly separated Caffi from the previous generation of view painters.

First training in Padua and then in Venice at the Accademia di Belle Arti, Caffi showed a rather unconventional penchant for perspective and topography from a young age. He moved to Rome as a young man to capitalize on this passion—one that would eventually secure him as one of the most innovative view painters of his lifetime. Between 1838 and 1842, Caffi went back and forth between Rome and Venice, and it seems likely that he would have executed the present work at some time during that period. He returned to the subject of the Rialto on at least three other occasions from different perspectives and angles, examples of which are found in the Musei Civici Veneziani [1]. In comparing all of the views of this corner of the Grand Canal, all of which have slight differences, what becomes apparent is Caffi’s virtuoso command of spatial construction as well as his striking skills as an observer of the fleeting effects of light and atmosphere.

A copy of Dr. Annalisa Scarpa’s letter of expertise, dated 14 March 2019, is available upon request from the department.

1. One view is closely comparable to the present in terms of perspective and location, while two views capture the Rialto from the other side of the bridge.  See A. Scarpa, Ippolito Caffi : tra Venezia e l'Oriente, 1809-1866 : la collezione dei Musei civici di Venezia, exhibition catalogue, Venice 2016, p. 65, cat. nos. 4, 5, and 6, all reproduced.