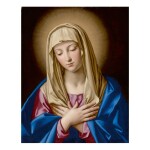 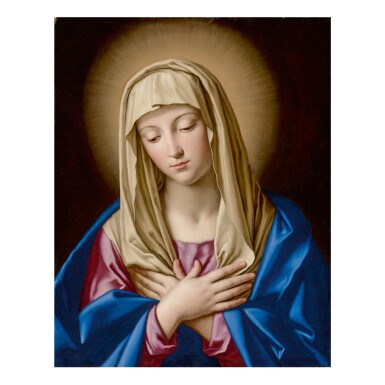 THE MADONNA IN PRAYER

The canvas is lined. The image is crisp and reads well beneath a clear varnish. The painting has been recently cleaned and attended to. The canvas is pressed in some areas, causing some thinness here and there, for example in the pink of the costume at lower center. There is one small, horizontal, 1/2 inch thin but stable crack in the upper right background. UV reveals areas that fluoresce unevenly in the background, possibly from an old campaign of restoration. UV also reveals a vertical area of retouching at the center of the Virgin's hand, some broad strokes in the shadows of her upper neck, and some spots concentrated at the extreme edges, for example in the lower left edge, which are also visible to the naked eye. There are a few fine spots and thin strokes of restoration scattered throughout her costume as well as a few thin strokes and spots scattered here and there in her face. The painting can hang in its present state. Offered in a simply carved giltwood frame.

Giovanni Battista Salvi, more commonly known as 'Sassoferrato', after the town in which he was born, learned the rudiments of painting from his father Tarquino before embarking on a trip to Rome. There he studied the works of his contemporaries, including Reni, Domenichino, and the Carracci. His greatest influence, however, was Raphael and he is known to have directly copied the latter's compositions.

Despite being an accomplished portraitist, Sassoferrato specialized in easel paintings of a devotional nature, usually representing the Madonna alone or with the Christ Child, of which the present composition is an outstanding example. He was primarily employed by his patrons to provide images for personal spiritual contemplation, and the Counter Reformation's increased emphasis on veneration of the Virgin and the Marian cult meant Sassoferrato's intense and moving depictions of the Madonna were much in demand. The Madonna in the midst of quiet prayer was one of his most celebrated subjects and he returned to it many times throughout his career. The large number of autograph and studio replicas of Sassoferrato's compositions attest to the popularity they enjoyed within the artist's own lifetime, and the present composition is known in at least six other versions, including one in Trieste in the Church of Santa Maria Maggiore.

We are grateful to Professor François Macé de Lépinay for endorsing the attribution on the basis of photographs.