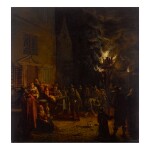 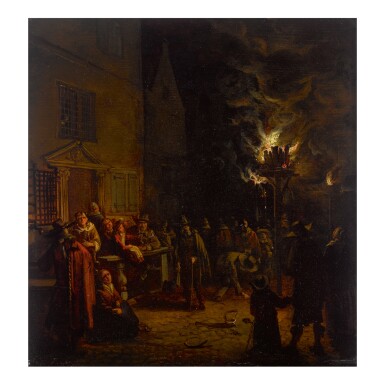 A NOCTURNAL VILLAGE SCENE ON THE OUDE DELFT, WITH NUMEROUS FIGURES GATHERED AROUND A BURNING TAR-BARREL

The panel is flat, uncradled, and beveled on all four edges. There is one crack in the lower right corner, one at the center of the lower edge, and one about 3" that runs vertical in the sky to the left of the torch. There is a small loss to the panel at the extreme upper left corner. To the naked eye, some restoration is visible throughout. Inspection under UV reveals a varnish that fluoresces across the panel, but there seem to have been a few campaigns of restoration to address the thinness and details that have sunk as a result of the darker colored palette. More recent restoration is visible in the costume at lower left, the window at upper left, and some loosely applied strokes in the background. There is also some thin strokes of retouching to the crack in the sky. Despite the darkened palette, the images still reads well. Offered in a simply carved dark frame with a carved gilt liner.

There acquired by the present collector.

In this brightly lit scene of a street at night by Van der Poel, people are gathering around burning tar barrels, raised on wooden poles. We see children, elegantly dressed figures, and also peasants, all crowding around these fires. The street can be recognised as the Oude Delft, the canal running through the heart of the city of Delft, not only due to its characteristic buildings to the left, but also due to the fact that Van der Poel painted this scene in Delft more than once. A work in the Museum Het Prinsenhof, Delft (inv. no. PDS 85) was painted from a very similar viewpoint, just a few houses back on the Oude Delft. The prominent house in the Delft picture, with its late-Gothic architecture can be easily recognised as the Hoogheemraadschap building. The door further along, with the pediment above it, can be identified with the door in the present work.

In the 1650s Van der Poel painted several of these street scenes, often using a real city view as their setting. Already in his lifetime he was known as the best fire-painter of Holland [1], also depicting imaginary farmhouses, caught on fire in the middle of the night. Here he has chosen a topographical view, allowing scholars to speculate on a possible event in history that would prompt to such bonfires, the celebration of the Peace of Munster in 1648, among them. These speculations however, do not seem to hold any steady ground [2]. The pictures of bonfires on the Oude Delft by Van der Poel, must therefore just be regarded as depicting nightly spectacles of flickering light: the artist's speciality.