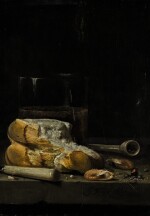 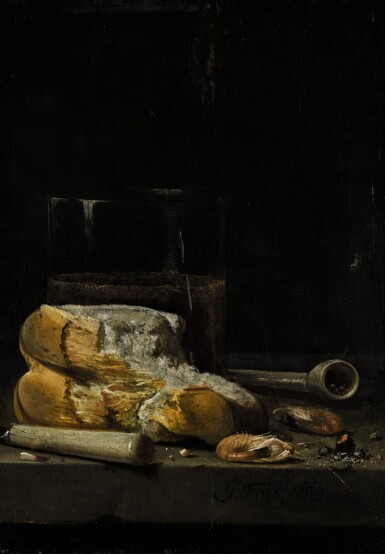 JAN FRIS | STILL LIFE OF BREAD, PRAWNS, A PIPE AND A GLASS OF BEER ARRANGED ON A TABLE

JAN FRIS | STILL LIFE OF BREAD, PRAWNS, A PIPE AND A GLASS OF BEER ARRANGED ON A TABLE

STILL LIFE OF BREAD, PRAWNS, A PIPE AND A GLASS OF BEER ARRANGED ON A TABLE

The small panel, which is made of one vertical panel, is uncradled, flat, and beveled on all four edges. The image reads strongly beneath a crisp and clear varnish, and the painting is in overall good condition with good detail preserved. There are some very minor losses at the extreme lower right edge. As visible in the printed catalogue, there are a few very minor inconsistencies to the surface, including a faintly discolored spot near the center of the upper edge, a thin scratch to the varnish in the lower right quadrant, and two thin lines of accretion (or old discolored retouches) running vertically in the glass. There is a small retouched spot near the center of the right edge, and there is a smudge to the varnish near the left portion of the upper edge. Inspection under UV reveals a only a few very small and scattered pin dots of retouching here and there, such as a few in the shadows of the glass. The painting can certainly hang in its present condition and no other intervention is necessary. Offered in a simply carved dark frame. Please note that the image in the printed catalogue has been very thinly cropped along the right edge.

Acquired for the present collection by 1984.

Nearly all of Fris' few known still life paintings comprise simple arrangements of toebackje elements such as a pipe, tobacco or spill, with a jug and glassware and sometimes shellfish, arranged on a table-top or ledge. His subject-matter, compositional types and his style, with rich brown tones predominating, are influenced by Jan van de Velde. Some of Fris' small-scale works however, including this work, and another from the same year in Tübingen, and a Toebackje from 1654 (now lost) are more simplified than those of Jan van de Velde, so that the viewer is invited to contemplate a sparse arrangement of domestic objects which are dramatically lit so as to pick them out from a neutral dark background.1 The purging of color from these pictures acts in a similar in these works as it does in the tonal landscapes of Jan van Goyen, allowing form and texture to predominate. Here Fris has built up his composition using nuances of tone and modulations of light, endowing the objects depicted with a solidity of form and a definition of texture—the fleshiness of the soft inside of the briken bread roll and the luminous hardness of the bone handle of the knife for example—without the competing distraction of color.