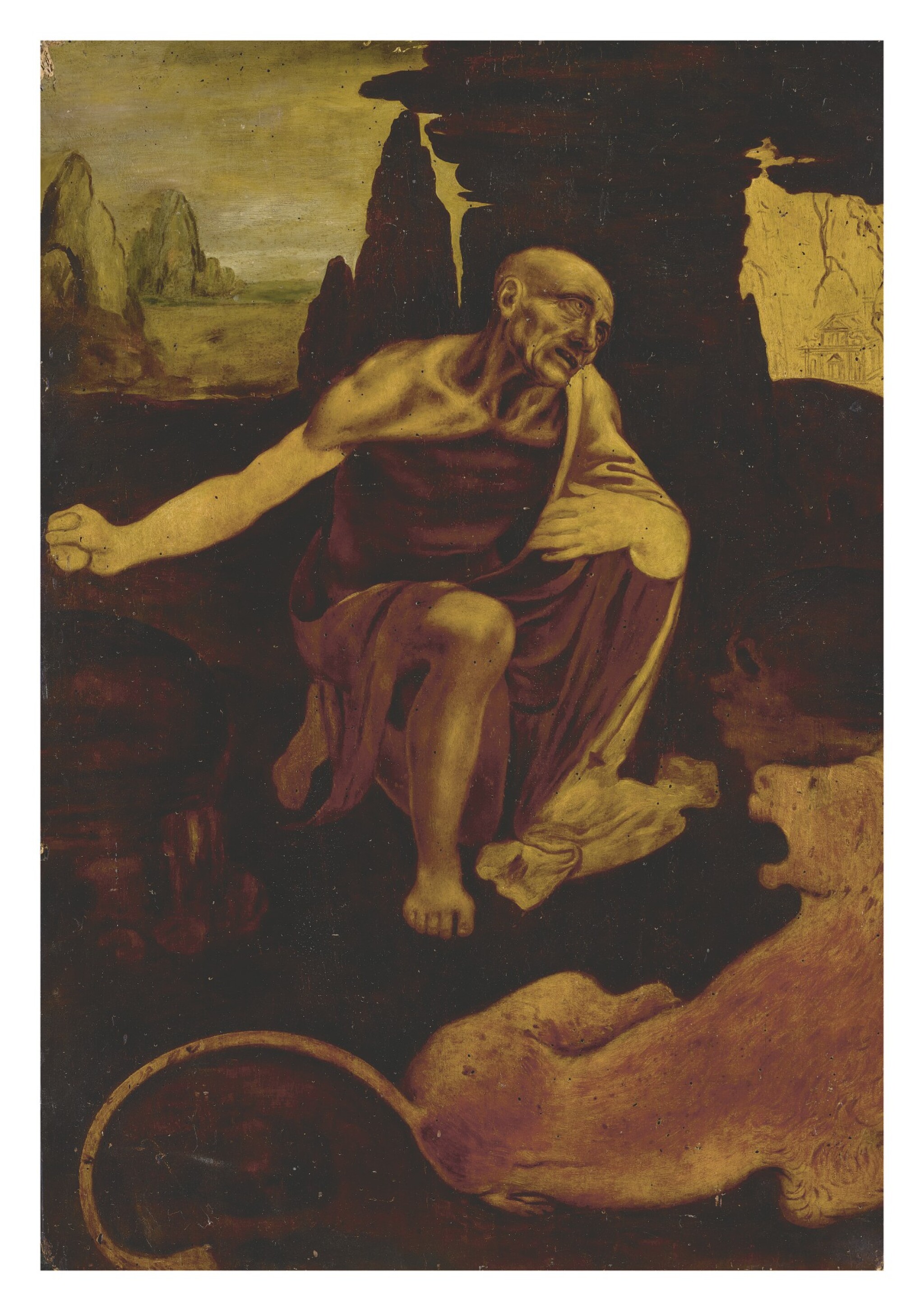 This picture has not been cleaned in quite some time and is obscured by a severely discolored varnish. Due to the dark and cloudy varnish, portions of the painting are barely legible even with under strong light, for example in the bottom left quadrant where the rock formations are swallowed up in darkness. Ultraviolet illumination confirms that the most recent campaign of restoration is made up of tiny retouches to address small losses throughout the painting. Older restoration, visible under strong light, includes retouching of tiny pinpoint losses following the vertical wood grain, a few large scratches through the left half, and large brushy retouching in the lion's back. A large loss in the lion's head down to the wood support is barely noticeable due to the varnish. Some amount of toning appears to exist, likely to boost the overall contrast without removing the varnish. The wood panel support appears to be an unusually large single piece of wood. On the front, worm exit holes are scattered across the surface, and evidence of old insect activity including exposed tunneling is found on the reverse. The acute discoloration of the varnish obfuscates clear reading of the condition and complicates predicting results of any cleaning. However, it seems reasonable to presume that the legibility of the picture would be considerably improved and some degree of wear and losses should be expected.

This panel is an important addition to the scholarship of Leonardo da Vinci, as it is the only to-scale replica known of the artist’s Saint Jerome Praying in the Wilderness (circa 1482-1485), which is today in the Vatican Museum (fig. 1).1 Certainly painted in close proximity to the original, this painting preserves not only the compositional details but also the overall impression of one of Leonardo’s most mysterious images. In addition to size, this panel also closely compares in the use of monochromatic tones, sensitive modelling, and a walnut medium. Like Leonardo’s Adoration of the Magi in the Uffizi Gallery in Florence,2 the Vatican Saint Jerome was also left unfinished. Both examples share a similar dating, and their suspended states of execution allow for a greater understanding of the enigmatic artist’s creative process. While the circumstances for the Uffizi panel are known, having been commissioned for the monks of San Donato a Scopeto in Florence, those of the Vatican Saint Jerome largely remain a mystery. Stylistically, it relates to examples from his first Florentine and first Milanese periods, and it may be one of the “certain Saint Jeromes” found in a long inventory of works in his possession from about 1482.

Despite the fact that the Vatican Saint Jerome remained largely unmentioned until its reappearance in the collection of the artist Angelica Kauffmann in Rome around 1800, the work must have been known among Leonardo’s close circle in his lifetime and in generations to follow. Its visual impact is recorded in painted and printed examples that largely preserve the composition, such as in a panel of the same subject attributed by Petdretti to an early Lombard follower of Leonardo3 and in a woodcut frontispiece for the Antiquarie prospetiche Romane Composte per prospective Melanese depictore by an unknown late 15th-century Lombard artist.4

At some point in its history, probably in the early 19th century, the Vatican Saint Jerome was cut and the head of the saint was removed. According to various accounts, the scattered pieces were reassembled by Cardinal Joseph Fesch by about 1813. It remained in his collection, until a few years after his death in 1841, having been acquired privately by a dealer in about 1845. In September 1856, after a long and successful campaign lead by the painters Tommaso Minardi and Luigi Agricola, the Italian state acquired the painting for the Vatican Museums.5